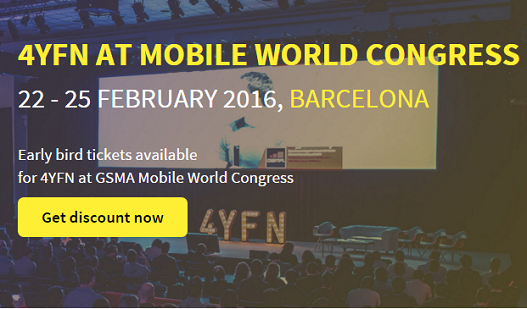 The highlight of the 4YFN program, organized by Mobile World Capital Barcelona and GSMA, the 2016 Mobile World Congress is the world’s largest gathering for the mobile industry, organised by the GSMA, & held on 22-25 February 2016. The congress takes place at two venues, Fira Gran Via and Fira Montjuïc.

The three-day program led by globally-known experts in entrepreneurship and innovation, and features conference sessions, workshops, interactive discussions, pre-arranged one-on-one investor meetings and start-up competitions, such as the finals of the Global Mobile Innovators Tournament enabled by IBM, plus much more to be announced.

It will provide an in-depth coverage of the current and future mobile industry, highlighting specific areas of growth as well as the latest technological developments, next generation services and growth strategies. To learn more about Mobile World Congress, click here.

Now in its third year, 4YFN (4 Years From Now) is an international business and networking platform for the global tech start-up community. As a business platform, 4YFN creates lasting connections among startups, investors and corporations under the belief that startup culture is the driving force for change in economy and business fabric.