Iraqi startups suffer from a critical lack of skilled coders but a new bootcamp in Baghdad called The Week is trying to narrow this talent gap.

Ismail said he was inspired by conversations with the university’s VP of innovation and research Vivek Wadhwa and VC David Rose on how to advance the entrepreneurial ecosystem in Iraq. 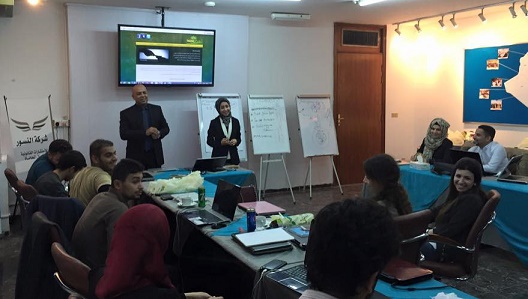 Legal training for coders-turned-entrepreneurs at The Week from Iraqi law firm Al-Nisour. (Images via Marwan Ahmed)

The bootcamp adopted a small classroom approach by selecting 18 participants with backgrounds in coding and a passion for learning more about what it takes to launch a startup.

“[It’s] the hands-on experience, rather than opening the slots for mass participation and boasting about large participation numbers,” he said. “As you can see, it played out nicely and everyone can feel the improvement and the skills they got from The Week.”

Al-Hassan Al-Nassiry, a coding instructor in The Week, said the significance of the learning experience in the bootcamp was in building a culture of coding in Iraq.

“What we are doing at The Week is increasing the culture of hand-coding from scratch among the interested audience. [They] are not that many in comparison to the non-tech people who usually comprise the majority of [those at] entrepreneurship events and meetups,” he said.

The experience was beneficial even for the more advanced participants, said mobile app developer Amr Khamis.

“In the first two days, I felt that my experience did not add to me that much because my coding background was a bit advanced on the starting point of The Week,” he said. “But when Ali started [talking about] bootstrapping and then introduced us to Parse [app development platform], I felt I learnt a lot.”

Entrepreneurial education was the other significant aspect of the bootcamp.

The 17 guest speakers and handful of investors spoke both in person and via Skype about opportunities, customer discovery, legal issues, UX Design, and design thinking.

Startup Next director and global Startup Weekend organizer Elliott Adams joined via Skype from Dublin, and was the most anticipated guest speaker. He gave an introduction to customer development and shared his insight on the book “Running Lean”. 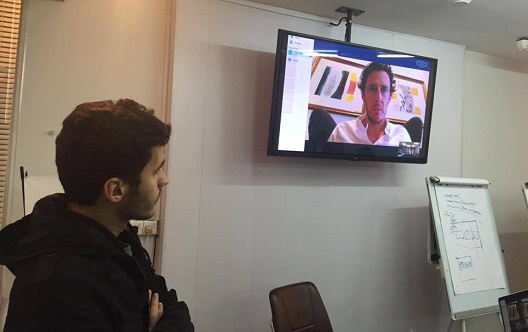 Elliott Adams in Iraq - via Skype.

Developers in Iraq are scarce. Only about 20-30 percent of attendees at Iraq’s Startup Weekend events identify as having technical skills.

A survey conducted at the entrepreneurship boot camp SW NEXT in 2013 in Baghdad, found that of 80 people 71 said that any software or hardware skills were not a result of their education journey.

University computer sciences are not solving the problem. Students can easily walk into any computer science department and meet a good number of students in their final year who don’t know anything about operating systems, or even how to troubleshoot a simple problem in their personal computers.

“What we learned in the university was irrelevant and we didn’t actually practice coding. People memorize some lines in coding and just write them down on the test papers without even understanding what’s going on,” said a The Week participant named only as Mohammed.

Ismail’s vision for the bootcamp is to scale outside of Baghdad to the north and south of Iraq, and then become an Iraqi brand that would be used in other countries.

“Scalability is my ultimate goal. While the syllabus and the materials may vary from country to another, the basic flow and the best practices will be the common factor that can be applied in the MENA region markets that share common aspects.”

Iraqi developer Ahmed Jamal, a winner of 2013 Startup Weekend Baghdad and now based in Seattle working for a startup, said The Week would help coders maintain their technical skills and help boost entrepreneurship networks.

Disclosure: the author was participating as a trainer during The Week.