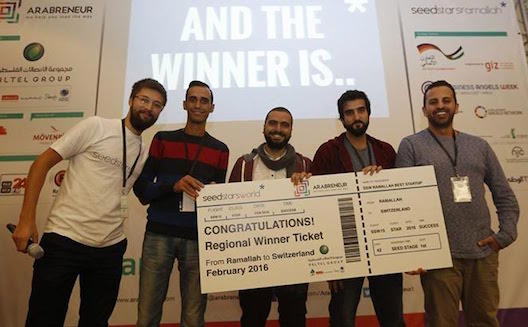 First place and a ticket to Switzerland: meet the Mashvisor team. (Images via Arabreneur)

Mashvisor has been selected as a national winner in Seedstars' Ramallah competition on November 16.

The Ramallah-based real-estate analytics startup will compete against other startups from around the world in the Seedstars international finals in Switzerland in February 2016, for a $500,000 prize.

Held concurrently with cities in MENA and around the world and part of Global Entrepreneurship Week, Seedstars Ramallah brought together 12 startups from the West Bank and Gaza for a one-day contest.

The event was organized by Arabreneur, a Ramallah-based business accelerator that supports tech startups and connects them with investors. Co-organizers included Paltel Group, GIZ and Global Business Angels Network.

Startups were selected based on their merit and competitiveness, said Arabreneur accelerator manager Hanan Khaldi.

“Once startups participate in Seedstars, they become part of a global networking community connecting local and international startups together to a network of over 200 investors,” she said.

Nine startups from the West Bank and three from Gaza pitched to Seedstars’ jury. 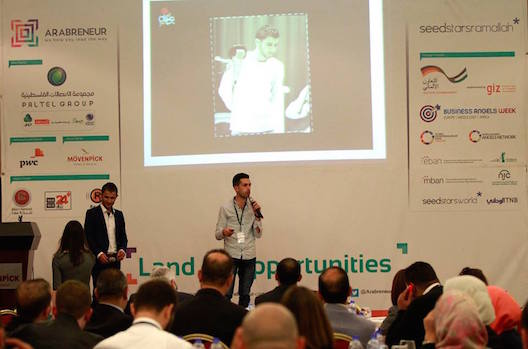 Entrepreneurs from 12 Palestinian startups pitched their companies to a jury of experts.

“Winning Seedstars was very exciting for the Mashvisor team, said cofounder Peter Abualzolof. “We view it as one step closer to achieving our goals and definitely reaffirms our belief in what our team is capable of and Mashvisor’s potential as a change maker in the real estate data analytics space.”

He said he aimed to win in Switzerland despite the fierce competition they would face. 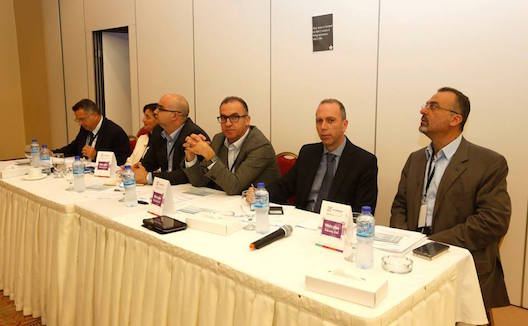 The jury had the difficult task of selecting winners and runners-up.

Runners up included The Walking Tech with its fitness tracking app in second place, and RedCrow with its online solutions for NGOs working in the MENA region in third place. Both startups were awarded a suite of software programs.

“We are happy to be one of the top 12 finalists in Palestine to get the chance to pitch in this great event,” said Sa’ed Qaryab, founder of The Walking Tech. “It is a great competition to participate in, and it has given me the chance to meet a lot of entrepreneurs, mentors and some potential investors.” 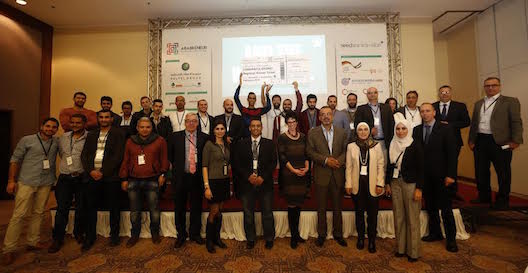 Seedstars Ramallah: there is no substitute for enthusiasm.

Arabreneur CEO Abdulmalek Al-Jaber said he was proud of the event and the quality of the startups.

Despite tough conditions, Palestinian entrepreneurs were on par with their skills and competence with top entrepreneurs from around the world, Al-Jaber noted.

“What’s unique about this year is the noticeable participation for Gazan startups, and the high quality of the pitches presented by the entrepreneurs,” he said.

Arabneur will take on another set of entrepreneurs early next year, and will work closely to link them to markets and investors, particularly in the Gulf area and in Bahrain, Al-Jaber said.

As for Mashvisor, you can follow its progress here.