Online luxury sales are projected to grow by an unprecedented 20 to 25 percent over the next five years, according to a Boston Consulting Group report.

The report covers recent investments and acquisitions of fashion ecommerce sites. Farfetch, a marketplace that connects consumers with boutiques, recently closed an $86 million Series E funding round in a deal that valued the company at a staggering $1 billion.

Closer to home, fashion ecommerce platforms are on the rise. A few examples include Namshi, Coterique and Style Treasure, as well as other platforms that offer a wider range of items, like Souq.com and Jumia. Social media platforms like Fashionista also have their own place.

It is in this environment that Slickr, the region's first fashion social network, recently launched in Egypt. Though Slickr launched as a social network focusing on clothing, handbags and accessories, it wasn’t long before the founders decided to get into ecommerce.

"We didn't spend a single penny on marketing, and we were able to build a community interested in what we have to offer," Spanish cofounder Maria Muñoz told Wamda. "This encouraged us to add online purchasing about a month ago, and the results are encouraging." 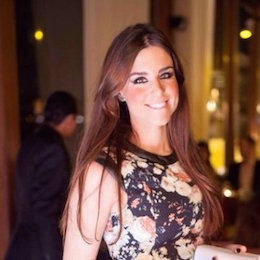 Muñoz, left, who has been living in Egypt in the past five years, spoke Egyptian-accented Arabic fluently.

The website receives 20,000 visitors daily, and received 60 purchase orders in its first week.

Slickr's revenue model relies on interactive ads and premium placement the network offers its designers. It doesn't take commissions from merchandisers or clients, "which makes our prices competitive to a big extent", Muñoz added.

Seed funded four months ago by three risk-taking investors, the cofounders are seeking 10 million Egyptian pounds (US$1 million) from British investors by the first quarter of 2016. They hope to expand to the UK and eventually the European market.

"We currently don't plan on expanding to the countries of the [MENA] region," Muñoz said. "Our priorities are Europe, starting from Britain, then Germany, then Paris."

Merchandisers dealing with Slickr are responsible for the delivery of their orders. Slickr does not have a customer service section or partnerships with delivery companies.

Items ordered on the website take seven to 10 days to arrive, and can be returned if they don't fit the descriptions mentioned on the site.

These facts may explain Slickr's decision to rely completely on cash-on-delivery payments, though they plan to "launch epayment in three months", Muñoz said.

Will Slickr partner with PayPal in the future?

After launching the epayment feature, Slickr is considering partnering with Paypal as a payment gateway.

"Paypal is one of the easiest epayment methods that anybody can use. It's also convenient with small enterprises since there are no monthly fees or a ceiling limit for selling," Muñoz said. "Also, you don't have to have a credit card."

"On the other hand, the company sometimes freezes a client's account in case of complaints of account hacking, where users can't access their account until the problem is solved. But there is no doubt the benefits of this service outweigh the risks," Muñoz added.

For Slickr, the Egyptian market is a double-edged sword.

"The Egyptian market was no doubt the least costly for us, whether in terms of office rental or recruiting human resources," Muñoz said. "But we struggle a lot to find talent, especially in technology and app development."

Tough competition from many including shopping network Lyst, and Polyvore - which was acquired by Yahoo two months ago in a $200 million deal, await Slickr should it expand to the UK and Europe, as planned.