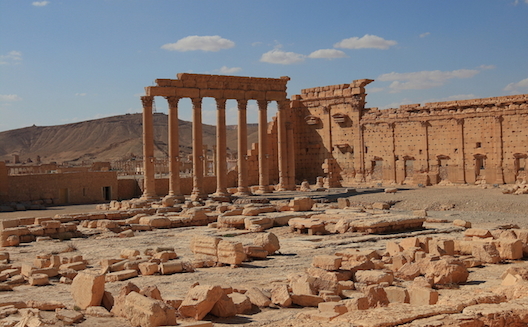 Syria's Palmyra has been a subject of looting and destruction. (Image via Shutterstock)

This article is an edited crosspost from the MIT Technology Review Arab Edition.

Archaeological sites and artifacts in the Middle East and North Africa used to just be at the mercy of nature’s elements, but now they are at the mercy of armed groups like ISIS. Across the region, cultural sites such as Palmyra and the Mosul Museum are being systematically destroyed. Archaeologists, international organizations, and the public are racing against time to document destroyed sites and artifacts while also preserving landmarks that are still standing, untouched by armed conflict.

The destruction of these sites is happening at an unprecedented scale according to Dr. Bijan Rouhani, vice-president of the International Committee on Risk Preparedness (ICORP). “This destruction is cultural cleansing because these sites offer evidence of different civilizations and cultures. If ISIS becomes successful in their regime, then we will have a very monotone culture in the Middle East, which isn’t a true Middle East because it has always been a mosaic of cultures and religions,” adds Rouhani.

Because going into countries with ongoing wars has its own risks, archaeologists and academics alike have turned towards technology to help preserve these symbols from a distance. Since the end of 2011, the efforts to save and preserve these sites are more full-fledged, focused and have gained more momentum than in previous years.

[Editor’s note: The work of Syrian open source advocate, Bassel Khartabil, can be seen on New Palmyra Project, a project that digitally preserves the ancient Palmyra heritage site, which is currently under the control of ISIS. Khartabil was taken into custody by the Syrian government in 2012 and as yet his future is unknown.]