Your passion was unmatched! Congratulations to our 3 entrepreneurs, we can't wait to see what's next for you! pic.twitter.com/I3etOE5IJC

Thirty candidates from the GCC and Levant region were selected to spend seven minutes in the Infiniti Q70 for a chance to win $40,000.

Infiniti Middle East announced its first ever speed pitching competition in early October, receiving more than 100 applications from UAE, Kuwait, Jordan, Lebanon and Saudi Arabia, among others. It was the launch of the Infiniti Q70, a car “born out of entrepreneurial thinking”, was the motivation for the event.

“The Infiniti Q70 is built as a vehicle for those with drive,” said Craig D’Silva, Infiniti’s MEA PR and corporate communications manager. “As a challenger brand, we wanted to do something that would not only embed the Q70 campaign theme, but also support entrepreneurship in the region.”

From the initial applicant pool, 30 candidates were chosen to pitch their business idea during the event. Ideas ranged from drone food delivery services to a rent payment app to laundry services on the go. The only caveat to each proposal was that the service or product had to add value to the region.

Seven minutes in the Infiniti Q70, three individual judges and six total laps around the racetrack in the Dubai Autodrome; that was the pitching opportunity for each candidate. The seven minutes, which adds up to 420 seconds, was a play on the 420-hp output of the Q70. 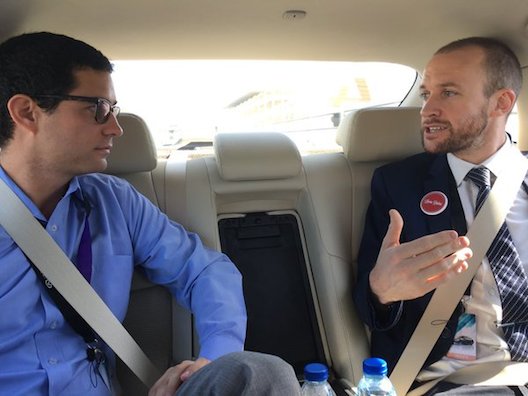 “Usually it’s a typical pitch in a meeting room with your judging panel and your powerpoint,” Walters said. “This car aspect is unique [because] it’s just me, the car and the judges, which is crazy”.

“When you have slides, you have a certain order in mind,” said Paulo Silva, cofounder and managing partner of 247 Venues. “This is much more natural discussion where you are not beholden to your slides, which makes it more interesting.”

The judges panel was revealed on the day of the event with each candidate meeting their individual judge upon opening their assigned car door. Both, candidates and judges, received a copy of the scorecard in advance.

After three rounds of potentially dizzying pitching sessions, the 30 candidates were narrowed down to six. These six then gave a two minute presentation to the entire judges panel.

Peyman Parham Al Awadhi, entrepreneur and founder of Wild Peeta and Qabeela New Media, said among the many things the panel looked for in each candidate, he specifically sought those that were ready to receive the money and make the most of it.

“An entrepreneur survives by any means necessary,” he explained. “The potential to get $40,000 is a life changing thing. I was looking for someone who, if given the money, would make the biggest impact right now.”

During the two minute session, each candidate had to also answer why their idea should be among the three sent to Hong Kong. At the end of the day, the three that successfully impressed the judges were - Stefano Fallaha from Lebanon, founder of a hands-free voice based social network Fallound; Zaina Al Bader from Kuwait and founder of Bookr, an app for booking appointments on the go; UAE’s Thea Myhrvold, founder of online tutoring platform Teach Me Now. 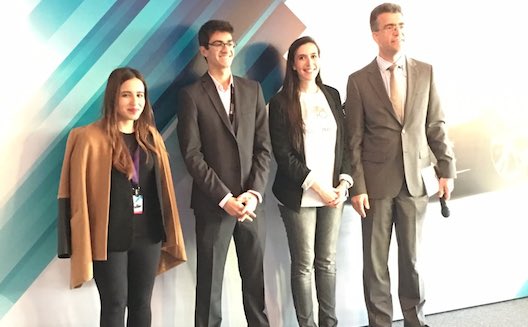 Each will now travel to  the Infiniti Lab in Hong Kong for a three-day mentorship series with Infiniti global partner, Nest. The finalists will then pitch their businesses to a panel of judges of Nest and Infiniti senior executives to win $40,000 in seed level funding.

“It feels great,” Al Bader said. “I’ve never been to Hong Kong, and I’m excited to be part of Nest and learn more about the Asian market.”

The competition was the first event of its kind for Infiniti ME.

“We genuinely want to support something meaningful,” D’silva said. “What’s next is based on the results [of this event]. The aim is to grow while keeping the event exciting and fair.”