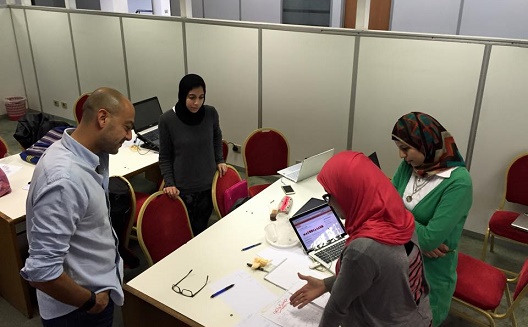 Hack4Egypt is a chance to build the billion dollar company of your dreams, said ITWorx Education CEO Hatem Sallem as he kicked off Cairo's very first Hacka MENA sprint on Thursday.

Unlike the common understanding of the word, this ‘hacking’ event was about generating startup ideas and developing them.

The participants had to create a business model and a demo application starting ofrom 8pm on December 10 and be able to display the completed concept by the 3.30pm, December 12 deadline.

The winners were competing for seven prizes that included two six-month stays at the GESR coworking space, mentorship from Nile University and a three month working space in Qafeer Lab’s Skills Lab.

The event was part of the Hacka MENA tour and was held in cooperation with the Rise Up Summit, which took place on December 12-13. The Hacka MENA concept was launched by Haider Ghaleb and Roxane Jurkovskaja in April this year, when the first Hacka MENA event was held in Dubai.

The winning team Heart Ping took their idea on tour to the Expo Milan 2015, and to the UAE Innovation Week.

Around 600 applicants from a whole range of ages and backgrounds applied for Hack4Egypt but only 100 were selected. Only 70 actually followed through and showed up for the event.

“We were surprised by how people were excited about the event,” Jurkovskaja said. “Some people who applied were 11 years old and they were so passionate”.

After a speed round of 30 second introductions, participants were asked to team up with people they didn't already know. They were divided into 15 groups to start developing their ideas. 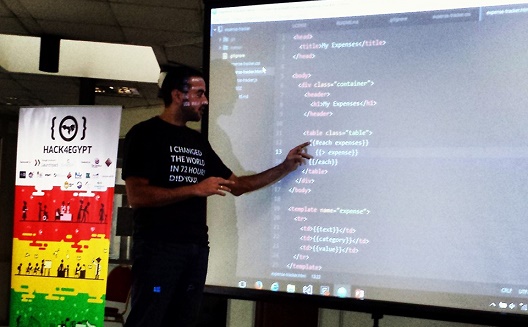 A bit of coding training (meteor frameworks, for those interested) before getting into the build.

On Saturday, the teams presented their final achievements to a panel of six judges, who gave feedback on the projects.

One after another, the teams pitched.

The judges debated their decision for over half an hour and what seemed like an eternity for the waiting teams, they announced the three winners.

“We had to consider that the ideas are still raw and the prototypes are still at the preliminary phase so it is not a real prototype,” said Sally Metwally, head of innovation and entrepreneurship at Misr El Kheir Foundation.

“The ideas had potential though so we wanted to work on it with them to develop it a bit further.” 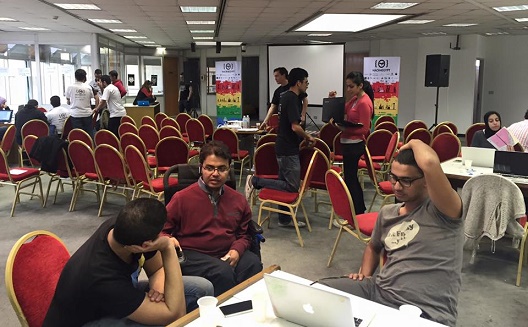 The three winning ideas who won the right to pitch at the Rise Up closing ceremony were Khod w Hat (Take and Give), M3rafsh (I don’t know) and Kid-U-Save.

The Khod w Hat application was developed by Nouran Mahmoud, Nevine Magdy El-Daly, Amr Ragaee and Atiya Mohamaden and Raghda and is based on the idea of skills exchange: skilled people can offer their help and those wanting to learn can make requests for assistance. Payment to the teacher can be financial or in kind, with the student teaching the teacher.

Ahmed Nabil, Annas Ahmed and Hussein Hamdy developed Kid-U-Save to help street kids. Passersby who see a street kid can take their picture and write some information on the case, and users donate to the specific child through a non-profit organization.

“Users donate the money and after a non-profit organization or a school picks up the case, the money donated in released to that organization,” Ahmed said.

And M3rafsh was built by Emad Gamal Attiya and Mohamed Mahrous. The two are studying engineering and computer science and suffer through Cairo’s traffic congestion regularly, so they built an application that crowdsources the best routes through the city.

Another traffic application named Za7ma (meaning 'crowded') received a one year support from CleanTech Arabia. The Therapist, a health application, won a three-month free working space with the Skills Lab and mentoring from Olkya until it raises funds.

Ghaleb and Jurkovskaja said the excitement from Cairo was encouraging enough to take the Hacka Mena tour further. They said that they were still receiving requests from different countries to start their hackathon events and they are now investigating how to expand it.