Pakistan is as misrepresented in the media as the Middle East and has an equally thriving startup ecosystem, but there is not much entrepreneurial activity between the two regions - yet.

In 2015, a handful of Pakistan tech startups expanded into Dubai and Saudi Arabia, revealing emerging links between the country and MENA.

Furthermore, a Wamda investigation found more with their eyes fixed on MENA.

Sweden’s Vostok New Ventures were part of a $9 million investment round for Pakistani property site Zameen.com in September. They contributed $2 million to the round, which invested in the holding company that owns 70 percent of Zameen and 100 percent of Bayut.com in UAE.

Zameen.com, a property site based out of Lahore founded in 2006, launched Bayut.com in 2008.

For them, being able to show their ability to scale to other markets was a great attraction for foreign investment.

“It was years before we received investment,” said Shehryar Qureshi, Zameen online marketing manager. “But it did play a very important role in helping us raise funds because when VCs and international players look at you they want to see if you have scalable solutions.”

Their plans for the expansion of Bayut this year include Saudi Arabia, Qatar and Bahrain.

According to Qureshi, Saudi Arabia is home to more than 1.5 million Pakistani expats who are already using Zameen.com. “Almost 4 percent of Zameen.com’s 2.1 million monthly users, to be exact,” he said.

Naseeb Networks International created the other deal that highlighted the ties between Pakistan and the Middle East.

They run a recruitment marketplace called Rozee.pk, as well as the Saudi recruitment site Mihnati.com and in May announced their third round of investment of $6.5 million.

Again, this was led by the Swedish and British duo Vostok and Piton Capital, respectively. Other investors included Silicon Valley’s Draper Fisher Jurvetson and ePlanet Capital. 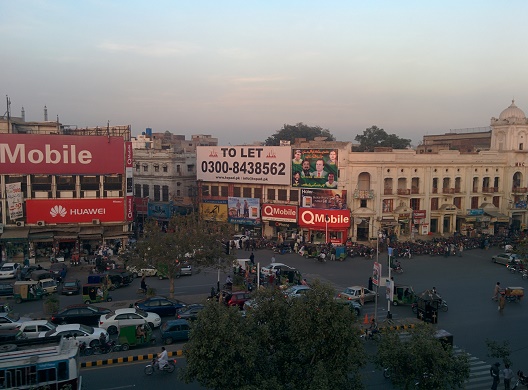 The start of a mobile market street in Lahore. (Images via Rachel Williamson)

Vostok sees Pakistan as on the verge of high growth when it comes to access to decent internet, like 3G. In a 2015 quarterly report they stated that “the launch of 3G in India proved to be the tipping point for a much broader set of people accessing the internet through smartphones and the 3G network.

“Pakistan is a country with a troubled past and has not seen anywhere near the amount of investment interest as neighboring India,” Vostok said. However, despite an immature market because of this, they believe that a country of 185 million “and a large and sophisticated middle class, the place obviously represents an enormous opportunity for an investor like us.”

There is also Frontier Digital Ventures, a Kuala Lumpur-based investors who, in 2014 took a 30 percent stake in Zameen.com, and raised $3.5 million for PakWheels.com.

And this is on top of receiving huge quantities of aid from the US and China, $7.5 billion and $46 billion respectively.

According to Bloomberg despite this interest, money, and a booming IT sector, Pakistan is what is known as a ‘frontier’ market. That means it’s not quite an emerging market, but it hopes to be soon. The UAE and Qatar were the latter until recently.

Pakistan, on a global scale, is also only a small tech player.

This year’s IT sales, worth $2.8 billion, of which $1.6 billion represents tech and IT services and software exported abroad, are just a drop in the $3.2 trillion global market, and dwarfed by India’s $100 billion worth of software exports per year.

It has about 1,500 registered firms and 10,000 IT graduates enter the job market annually.

Helpfully, however, tech takeup is high.

The expansion of 4G services throughout the country combined with China flooding the Pakistani market with cheap devices, is expected to lift smartphone penetration from its current 15-18 percent of the 180 million strong population.

But with an ecosystem that’s only a few years old and a comparatively giant market at home to conquer, the majority of Pakistan’s startups are still a few years off setting up outposts in the Gulf.

The advent of the global IT freelance industry is what many credit as the starting point for today’s Pakistani startup ecosystem.

Khurram Zafar is head of storeroom-turned startup hub the Center for Entrepreneurship at Lahore University of Management Sciences campus. 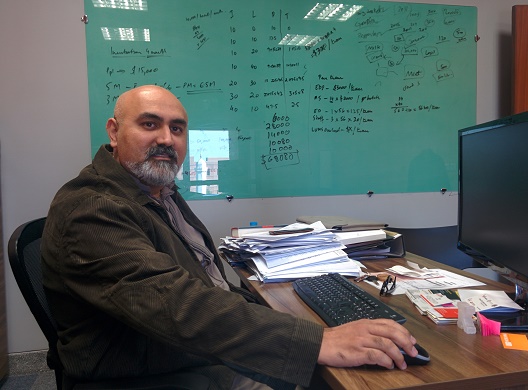 Khurram Zafar, head of (and driving force behind) LUMS' Centre for Entrepreneurship.

He told Wamda that when demand began to rise for freelance programmers in the early 2000s, many young Pakistanis began dabbling as a side job. Side jobs turned into full time one-man businesses and, gradually, a sense that starting a business was entirely possible.

The ecosystem was slower to catch up.

Three years ago there was a single coworking space in the capital Islamabad, which had started out as an incubator.

In 2012 the government-funded technology incubator Plan9 was set up. Since then at least 27 other separate support organisations have been set up with, according to Plan9 program manager Uzair Shahid, oversubscribed applications for every batch.

Shahid said 20 of the 80 startups that have graduated from Plan9 received funding from the local business community alone, and they were expanding the concept to other cities: at the time of writing there were five Plan9 incubators in universities around the country.

The key problem that startups are facing in the market is money: although there are plenty of foreign VCs and wealthy locals willing to sink $1 million-plus into a revenue-generating tech business, there is little angel funding and those support organizations are frantically trying to educate those Pakistanis in business on how to invest in early stage knowledge-economy startups.

The country has 57 registered business angels. 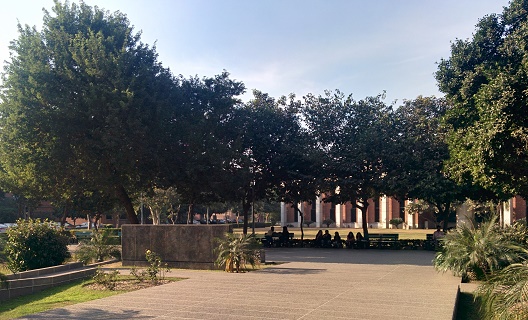 Relaxing outside the LUMS business school, which houses the Centre for Entrepreneurship incubator.

For many Pakistani startups the dream is to grow into India. Its 1.3 billion-strong population dwarfs Pakistan’s 188 million. MENA’s total population, from Yemen to Morocco, is 355 million.

Faheem Mumtaz founded PaperPk.com in 2007, a site that republishes classified ads and tenders from the country’s myriad newspapers online. He wants to expand into India, but told Wamda that as soon as potential media partners found out the business was Pakistani, they went cold. The only solution is to set up a separate company with an Indian partner.

As such the Gulf, for some startups (including Mumtaz, who said he could be convinced to go west instead of east) can be an easier market to head for.

Pantera Energy is a high-end solar panel importer and installer, cofounded by five guys and launched in 2014 to capitalize on Pakistan’s new enthusiasm for solar power. 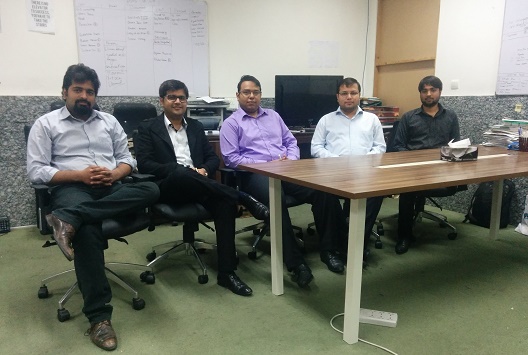 In 2017 they want to take over the Middle East.

Cofounders Taimour Tanveer and Farooq Saeed told Wamda that the region was the ideal next step for Pakistani solar companies - but not necessarily the Gulf.

Tanveer said that although solar wasn’t competitive now in the GCC area, because installing solar panels was more expensive than the heavily subsidized power, they had their eye on energy-scarce countries such as Jordan.

Pantera does have an advantage in this however, as they already have contacts in the Dubai business sector.

Importantly however, the ability of Pakistani startups to expand into the Middle East could be curtailed by the very potential of their home market.

He believes there are two kinds of startups in the country today: 25 percent are creating border-less software-as-a-service (SaaS) businesses that can be scaled worldwide, and 75 percent have ideas that cater purely to Pakistani market gaps, such as rolling out a national laundromat or oil change franchise.

The problem with the latter is that by the time it’s saturated the local market of 188 million people, it could be too late to scale globally.

Furthermore, the startups that have scaled overseas, are the small number who are large enough to do so, said Saad Hamid from Islamabad incubator invest2innovate (i2i).

Entrepreneurial ecosystems in MENA and Pakistan are both still young so it’s to be expected that ties between the geographically distant regions are not yet high.

However, the key ingredients are there for greater cooperation and mutual growth for the right startup in the right sector.