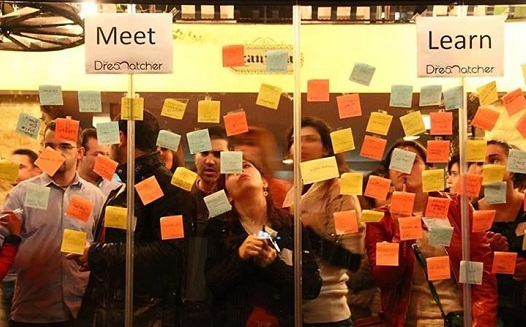 Dreamers writing their wishes on their 'dream wall'. (Images via The Dream Matcher)

For the past four years, The Dream Matcher platform has been connecting Lebanon’s dreamers with people who can make these wishes come true.

“We wanted to organize an event where people can actually have productive connections with the people they meet, not just to collect contacts and business cards,” founder Ali Chehade told Wamda.

The fortnightly events are held at Beirut coworking space AltCity, with more than 40 already taken place. The cost of attendance is $10 a ticket, which is how the organizers currently generate revenue as The Dream Matcher is not an officially registered company yet.

All participants write their own dreams on sticky notes, which are then placed on a ‘dream wall’ at the event. After that a ‘matching of dreams’ takes place: every dreamer chooses someone else’s desire to make come true. From publishing a book to meeting government ministers, learning photography or playing in a band, nothing is off limits. 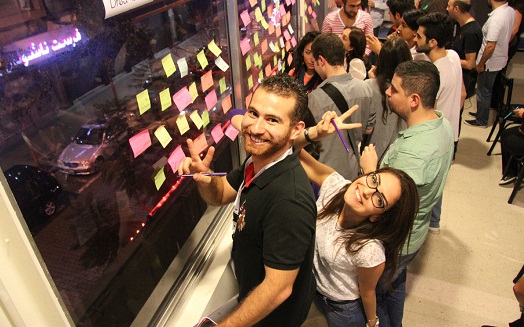 Chehade guiding the dreamers to write their wishes in the hope of making them come true.

What about the dreams that don’t match?

“A lot of the [dreams] end up without matches,” said Chehade matter-of-factly. “This is a natural part of the process. These participants are not compensated, per se.”

“A lot of people who have not found matches still came multiple times to our events, as they see value is social networking and meeting new people,” said Chehade.

Matar himself was able to start his own life-coaching and training business in 2014 after meeting founder of the SkillPills platform, Nour Atrissi, who is also a director at Startup Grind at a The Dream Matcher event. Atrissi encouraged Matar to take a course in neuro-linguistic programming (NLP), and helped organize events where he could be speaker and trainer as well, helping him attract clients.

Sana Kanaan was able to start a jewelery business after attending the 2012 entrepreneurship edition of the event and through it, securing a scholarship to the Amideast Entrepreneur Institute.

Dahdah credits The Dream Matcher’s entrepreneur edition for introducing him to his current team members, and to the entrepreneurial community in general. “I didn’t know there were communities to support web developers and entrepreneurs in Lebanon,” he said. “A lot of young people don’t believe they can achieve something on their own... the culture doesn’t support you much.”

Chehade agrees that Lebanese entrepreneurs face cultural barriers. When he first started organizing his events only a handful of people would show up, as his concept was not well understood. Events would be organized every couple of months, as opposed to the bimonthly schedule today.

“People would think that we’re trying to sell them something, or they would be embarrassed to share their dreams,” he said. “Dreams are not a topic people discuss much in Lebanon.”

Chehade has now toured Lebanon with the platform.

The Dream Matcher has been to Tyre, Tripoli, Zouk Mikayil, Zahle and Batroun. While some places, such as Tyre, did not receive a large audience, other areas such as Zouk Mikayil and Tripoli were more widely attended, with around 60 dreamers coming to each.

The last of these events was Zahle in the Bekaa valley in October 2015. Chehade plans to repeat the tour in a few months.

One factor that has helped Chehade go on the road was getting sponsors on board. In the entrepreneurs’ edition, startups would pitch to an audience in exchange for mentoring, branding, or consulting services from sponsors, such as Lebtivity, Eastline marketing, Vit-e and Altcity.

“You would be surprised to find about the companies willing to support entrepreneurship,” he said. “They see it as a cost-efficient way to market their services.”

He has also received licensing requests to replicate his idea abroad, from countries as far-flung as USA, France, Belgium, Egypt and Spain.

He said two of his friends, Zeinab Haidar, a student in Texas, and Lebanese entrepreneur Nadim Choucair, who lives in Madrid, Spain, have replicated his event abroad, with twenty to forty people attending each event.

“We received very positive feedback, as they saw it as a positive way for the community to get together,” he said. However, he could not give any examples of the dreams mentioned in these events, as he admits that he had “minimal involvement” in these events.

While he would like to continue replicating  the event abroad, his current goal is to grow the concept in Lebanon and add a feature that will allow him to stay updated on how each participant’s dream is evolving.

Chehade’s plans for 2016 include a corporate edition, where employees of large organizations can network and bond by helping their coworkers achieve personal goals.

“In large corporates that have many departments, people rarely interact, and they don’t really know one another” Chehade said. “We wanted to put them in an environment where they can add personal value to each other.”

“We had around 100 employees at two different events, and it was the first time we do something like that,” he said. “Again, they felt really connected. They felt that they can actually help their colleagues on a personal level.” He plans to have four more corporate events in Dubai this year, and he has already started reaching out to companies.