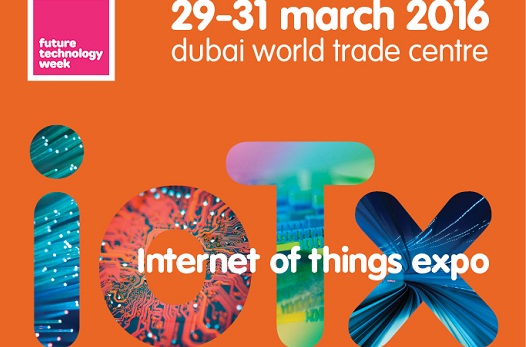 IoTX 2016 is the region’s largest and most innovative event covering advanced connectivity, smart cities digitalization and cloud based control of devices, people, and enterprise operations. In its second year, IoTX will feature technology leaders from across the world presenting on key IoT verticals and hot topics to more than 6000 visitors and 500 delegates.

The trends include IoT blueprint, connecting the unconnected, wearables, consumer behaviour, mitigating pervasive risks, and disrupting hardware. This year's conference will take place between March 29 and 31 at the Dubai World Trade Center. It is part of the Future Technology Week.

High-caliber speakers will be present to discuss their innovation efforts and opportunities, including Karine Suaz, vice-President of the greater Lyon area, Janusz Bryzsek, founder of Exo systems, Jamie Cudden, head of smart cities program at Dublin, Ireland and Ashi Seth, manager of enterprise platforms at Netflix.

Some of the most anticipated discussions include the following:

-Evolving from a connected city to a responsive and adaptive one. Speakers include Mohammad Azez, President & CEO of power generation services at GE.

-Oil & gas: understanding ways in which industial IoT is changing the oil and gas industry, by Wael Ali AlGhamdi, CEO of MachinesTalk.

-Robotics and other technology creating safer communities, cities and environments, by Prabhu Ramachandran, director of WebNM at Zoho.

-The first step for SME’s to monetise consumer IoT products, an interactive roundtable discussion, with Shuan Moore, CEO and founder of Chui , as one of the speakers.

-Mapping the value beyond the hype: printable sensors, graphene and transformative tech, by Aravind Vijayaraghavan, a lecturer in Nanomaterials at the University of Manchester.

Other highlights of IoTX 2016 include an exhibitor showcase of IoT solutions, a small cell conference discussing how small cell solutions make creation of digital landscapes simpler and uncluttered, a hackathon to allow innovative developers, designers and entrepreneurs to pitch, build prototypes, and compete, and an Innovation Hub to showcase solutions companies at the forefront of the Smart City development.

Register to attend the largest Internet of Things (IoT) conference in the region here.