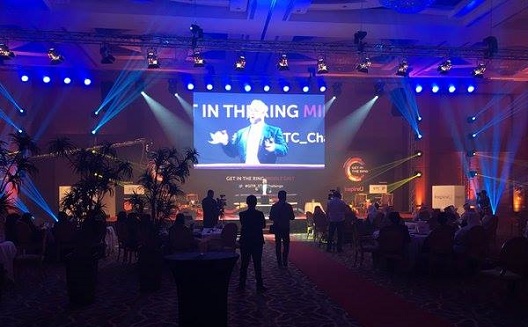 MC Keith Wallace kept the punches flowing. (Image via Get in the Ring)

The gloves were off last night in Riyadh at the regional final of the Get in the Ring startup challenge.

Seven pitches were delivered by four finalists and three runners up, from Saudi Arabia, Palestine, Bangladesh, Egypt, and Qatar, each trying to bruise their opponents’ argument with a stronger jab.

The location for the verbal boxing match, the Four Seasons hotel, was typically Saudi: big, beautiful and bling as guests walked into a haven of indoor palmtrees and lavish decor.

After a networking reception, the men took their places in front of the stage where a giant boxing ring had been set up, and the women were seated in a separate designated area to the side.

The host of the evening, Global Ringmaster Keith Wallace, conducted the event with charismatic ease, introducing the startups one-by-one, encouraging them to be fair with one another.  He gave the contestants equal time to pitch their ideas, making sure to cut them off with a ‘ding’ when the time was up, true to the rules of boxing rounds.

Some were more aggressive than others, throwing in occasional verbal punches at their opponents such as SolarizEgypt managing director Yaseen Abdel-Ghaffar’s “we don’t need any more of the kind of technology you are presenting!” Others were just grateful to have the opportunity to share their ideas in front of expert jury members. 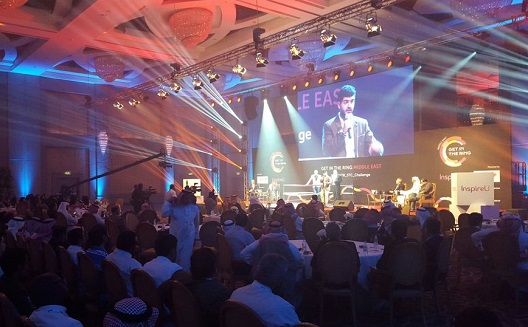 The middleweight contenders square off: SolarizEgypt and MyndPlay. (Image via Get in the Ring)

The judges were looking for resilience and, according to BECO Capital’s Youssef M. Hammad, humility - although that criteria didn’t seem to harm SolarizEgypt’s chances.

Throughout the evening the audience was subdued, except when they were asked to cast their votes by waving either a blue or a pink neon stick in the air to show their preference. This is perhaps a reflection of the fact that Saudis aren’t yet accustomed to these kinds of startup events, as the entrepreneurial ecosystem in the country is still very raw.

“The investment scene is more about networking and word-of-mouth for now,” said a Saudi investor who attended the event.

Yet in light of the comparatively small number of attendees - there were only around 150 at the evening pitching event, although organisers said overall they registered 400 people for the activities held throughout the day as well - there is clearly an interest that is developing, even for those that aren’t directly involved in the startup sphere.

Dr. Khalid Almuzaini from the National Center for Cybersecurity Technology, told Wamda: “It seemed like an interesting event so I decided to come and check it out.”

And the winners are...

The champions that emerged from the battles were Vanoman from Saudi Arabia and SolarizEgypt, both winners of different ‘weight’ categories. The former is a platform that connects truck drivers in the KSA with customers to facilitate the transport of furniture. The latter offers a range of solar solutions from off-grid to hybrid.

Both will be invited to the Get in the Ring final event in Medellin, Colombia, on March 15.

The audience cheered loudly for Vanoman, proud of the local who’ll represent Saudi Arabia at the big finale after beating Egypt's Slikr. For SolarizEgypt, the jury members seemed to appreciate the crystal clear pitch delivered by Abdel-Ghaffar versus that of MyndPlay.

SolarizEgypt are also gaining noticeable traction as they won the Seedstars World regional event at the RiseUp Summit in Egypt last December.

“We are starting with the GCC, then Africa and then why not the whole world!” Abdel-Ghaffar told Wamda. 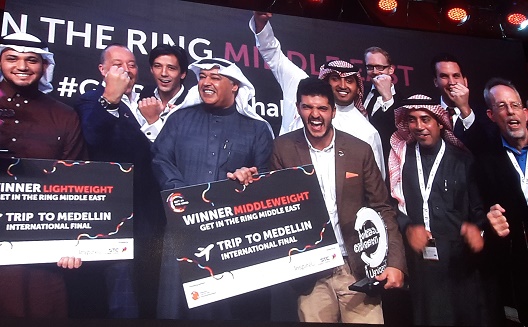 The winning teams: Vanoman in the 'lightweight' division, and SolarizEgypt in the 'middleweights'. (Image via Bérénice Magistretti)

A highlight of the evening was the pitching round that assembled the three runners up: Food For People from Bangladesh, Date Pits Filers from Qatar and Fadfid.com from Palestine.

All three entrepreneurs, two of whom were women, demonstrated a heartwarming social angle, striving to help people within their communities and around the Middle East: Food for People aims to redistribute food; Date Pit Filters wants to filter water in an eco-friendly way; and Fadfid.com helps connect people in need with trained psychotherapists via their online platform.

Even though they weren’t among the finalists who had the chance to win a ticket to the final in Medellin, Colombia, they still managed to wow the audience with their uniquely innovative ideas.

When asked why Get in the Ring chose Saudi Arabia to host the Middle Eastern regional final for the second time, organizer Erwin Koenraads told Wamda: “We found a great partner in STC that is extremely receptive to our entrepreneurial endeavor.”