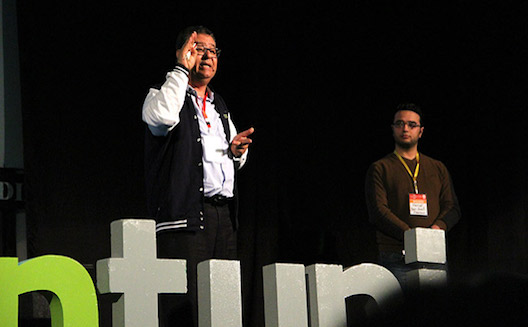 The Tunisian minister drop the suit for the fifth edition of Droidcon in Tunisia. (image via Tekiano)

Over the weekend, huge crowds of young people gathered in polite lines to get into Droidcon Tunisia 2016, a conference for software and mobile developers.

The high-mass of tech in Tunisia had, once more, been taking over by government officials whose announcements have been cheered by applauses from the techies.

For its fifth edition, the Tunisian edition of the international conference, gathered more than 1,500 developers, investors, renowned speakers and national and international officials on March 5-6 in Medina Yasmine Hammamet, making this the biggest Droidcon event in the world explained organizer Taher Mestiri.

The conference offered several workshops ranging from 'Game Design' to 'How to pitch your project'. More than 35 confirmed talks and 25 speakers were present, including top Android and Business Developers from Spotify, Google, and local success story, Walid Sultan Midani from video game studio Digital Mania.

The event was also a good opportunity to introduce younger generations to the tech world and organize coding workshops for kids.

More unexpected, an armada of government officials, CEOs of national companies and the big three telecom companies joined the event to learn more or present their programs and results.

The government gets into the game

Last year, and the very same stage, Minster for Communication Technologies and Digital Economy Nooman Fehri, announced the launch of an “international technologic card", an international bank card that would allow developers and tech professional to monetize their app by opening accounts on the app stores, and to buy softwares or subscribe to softwares they need to work.

It was launched in July 2015, after a test phase started in May 2015, said Khaled Bettaieb, general manager of Monétique Tunisie. Only 3,941 cards were sold which came as a surprise to the audience. Card holders cashed a total revenue of 22,404 Tunisian dinars (US$10,500) since the card was launched.

“In spite of the low return on revenue received by the international technologic card, it still had contributed to job and value creation on the local market, mostly through online advertizement,” he said.

The International Technologic Card is the first of many actions aimed at making Tunisia a digital country and help younger generations launch their own businesses and contribute to the creation of the startup economy.

“You guys are living in the real world, the 21st century’s world. [Officials'] ears are tuned to the 20th century. Our laws, some of them are from the 19th century. I will take it as a personal challenge to change this!” Fehri said, before he unveiled five main announcements.

He committed to link every school in Tunisia with Internet by the end of 2016, and said that by the year 2020, every single family in Tunisia would be connected to high-speed internet and that the government would subsidize DSL creating a “Social DSL” for families who cannot afford it.

By 2020 as well, he promises to have a paper free administration and that “government should be out of the way in business”.

He committed to keeping the internet as a free and safe space for everyone, saying that “nobody will shut your mouth when speaking on the internet” which was welcomed by cheering crowds and applause.

Finally, he announced that Tunisia is working on a new digital economy law with the support of the World Bank.

The odds are that next year, governments officials will be on this very stage to present the impact of those new measures.