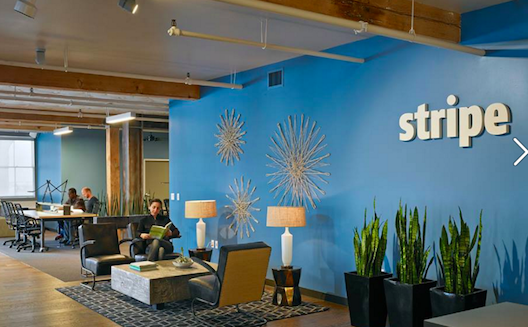 Inside Stripe offices. (Image via Stripe)

MENA startups will soon be able to register their companies in the US, as Stripe announced last week the launch of Stripe Atlas at the Mobile World Congress in Barcelona.

Patrick Collison, cofounder and CEO of Stripe, announced that the Irish mobile payment company wants to allow any startup in the world, aiming to expand globally to open a company in the US.

This can’t be but good news for MENA’s startups, especially those working in the ecommerce industry, as sending payment for businesses will become very easy and simple.

Through filling a web form on Atlas, and for $500, a company can be registered in Delaware in the US, within one week. In return, entrepreneurs would get a US bank account and a tax identification number.

Because it is not only about the paperwork, Atlas offers consulting services like legal advice from Orrick international law firm, tax advice from PriceWaterhouseCoopers and $15,000 in computing services from Amazon Web Services.

Today, six-year-old Stripe, cofounded by Irish brothers John and Patrick Collison, is valued at $5 billion and operates in 24 countries, serving clients such as Slack, Lyft, Kickstarter, and has sealed partnerships with Facebook, Apple, Twitter, and Pinterest. Its backers include Sequoia Capital, PayPal cofounders Peter Thiel and Max Levchin, and Visa.

Currently in beta and only available through referrals, Atlas seems to be promising a big market soon.

“Most economic growth over the next 25 years will come from the developing world,” Wired reported Collison saying. The team is now working with more than 60 investors, accelerators, and incubators to identify potential customers.

Rather than directly profiting from Atlas, the Collison brothers’ end goal is to build Stripe into the payments infrastructure for the entire internet.

"Globally, only about 2 percent of consumer spending takes place on the internet today; 98 percent is still offline," Patrick Collison said. But "the direction is so clearly towards kind of technology-enabled or internet-augmented services. Where we can do things better, we can make things available more efficiently, and we can do things that just weren't previously possible."

Start allows startups and SMEs to set up online payment services in a few hours. It is currently live in the UAE and being scaled to other regional countries. Its approach to solving payment problems for startups has more of a local flavor. “Start wants to make it easy for any local entrepreneur to accept online payment in a matter of days with no cost at all to setup their account or a need for a security deposit, coupled with PayFort team support in each local market,” PayFort managing director Omar Soudodi told Wamda.

“Stripe Atlas is an admirable effort and a good example of how companies can engage with external partners throughout the value chain in order to solve a business challenge,” says Soudodi.

According to the company’s website, the advisory board of Atlas includes former Deputy US Treasury Secretary Neal Wolin, Ben Lawsky, who was New York’s first superintendent of financial services, Linda Rottenberg, who runs Endeavor, and Fadi Ghandour, Aramex vice chairman and founding partner of Wamda.

At the Mobile World Congress, Collison said Stripe is not planning to limit its services to US and is already working on an additional jurisdiction.