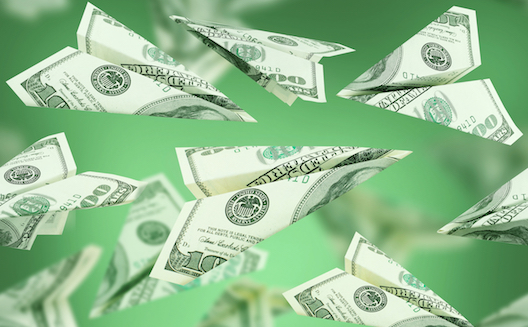 Several Tunisians want to help the diaspora help their country of origin. (Image via Shutterstock)

Distance can complicate relationships with one's country of origin, particularly when it comes to supporting family members back home.

In 2014, 30 million Africans sent remittances home, according to the World Bank.

Most of that $60 billion went through services such as Western Union and MoneyGram, which take average commissions of 12.4 percent. Compounding this steep cost is the issue of transparency as diasporans cannot know how the money they send home is spent.

Some members of the diaspora would like to support their home country in ways other than remittances, such as developing a stronger civil society, or financing cultural and business initiatives. But many hesitate to give due to transparency concerns: it’s often hard to ensure that one’s money won’t end up in the wrong hands and will actually reach its intended beneficiaries.

To combat this problem several Tunisians decided to develop new, more efficient solutions to help their loved ones and country in the aftermath of Tunisia’s revolution.

Working around the system

Several factors drive up the fees associated with transactions through money transfer companies, including the lack of competition and a high number of fees imposed by intermediaries. To cut these costs, the model has to change completely, said Link & Pay founder Ghazi Ketata.

“Our goal is cut those fees to inject more money in the African economy,” he told Wamda. According to the World Bank, dropping transfer fees down to 5 percent could put almost US $4 billion back in the hands of African diasporans and their families.

The 29-year-old Tunisian entrepreneur spent the past ten years in France. In late 2014, he joined the Founder Institute Paris to work on solving issues in the diaspora finance market. In early 2015, he launched Link & Pay.

The service allows Africans from abroad to directly pay for the items their loved ones would buy themselves back home. Loved ones select what they need from partner stores, and the diaspora purchasers abroad get a notification to pay the bill online or via their smartphone. 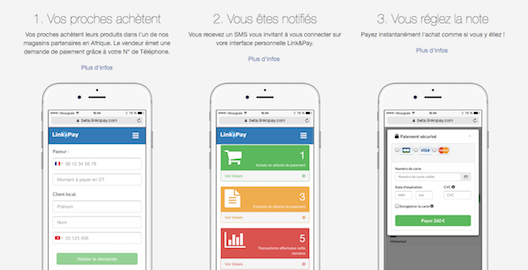 The startup has already signed partnerships with supermarkets and appliance chains, which, according to Ketata, were more accustomed to working with new technology than small local shops. He said it would be easier to bring smaller retailers on board once he gained the trust of bigger stores.

The service has not launched yet, and local consumers will be charged 5 percent of the total price and foreign payers will pay 3 percent or less, depending on the retailer.

Six months ago Omar Yaacoubi and Majid Bibi, two Tunisians who studied in the United States, launched TanitCash, a service with a similar objective but a different strategy.

Through TanitCash, diasporans can send money online to their loved ones in Tunisia who receive it on a virtual TanitCash wallet account. They are then be able to buy products at partner shops in Tunisia, through SMS.

Shopkeepers accept payment via a tablet that TanitCash licenses and receive the money from TanitCash at the end of each week. Transfer fees are fixed at 3 percent per transaction and cannot exceed 20 euros (US$22).

The service is currently available in 60 different shops, mostly drugstores, mini-markets, and other small retailers. According to Omar Yaacoubi, the service has already enabled 2,500 users to exchange $2.3 million worth of remittances.

To recruit more users, the entrepreneur opted to use a commission-based model with freelance sales people in Paris, Lyon and Marseille, who get paid when they convince a new user to join the service. The team expects to expand the service to the rest of the Maghreb through 2017, and later to the rest of the continent.

After the revolution Thameur Hemdane, a Tunisian entrepreneur based in France, wanted to support the cultural, social, and economic well being of his country of origin and looked to crowdfunding.

A year ago, he launched CoFundy, a crowdfunding platform dedicated to supporting projects from the Maghreb. Diasporans can give money to an array of projects they want to support. If a campaign reaches its funding goals the money is collected and, with no other intermediaries, the money goes straight to the project creators.

Launched only a year ago, the platform has funded seven projects to date, for a total of $34,000. Cofundy charges a small 2 percent fee on each funded project. 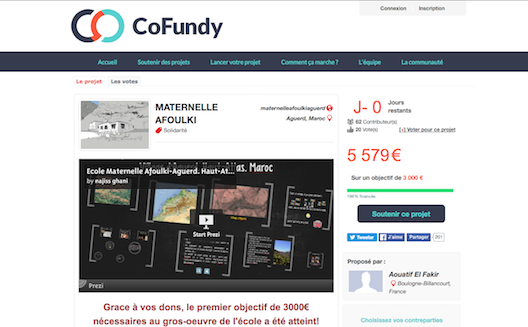 “Our goal was not to make money, but to get into crowdfunding in order to move to something bigger,” said Afrikwity cofounder Amina Nasri. “We felt that there was a need to give more, as well as a need from startups to get more money, so we thought we’d create a second platform dedicated to investment.”

A year ago, Nasri joined the CoFundy team to launch Afrikwity, a crowd-equity platform. Diasporans will be able to become investors in projects throughout Africa. For financial regulation reasons, the service will only be available to French residents, but this is expected to change in the future.

Afrikwity will be in charge of due diligence, selecting projects to fund, and organizing new shareholders within a holding they will all manage together. Afrikwity won’t take any fee or percentage from the capital collected, but will take a managing fee from the holding group. The Afrikwity beta is to be launched in the coming weeks.