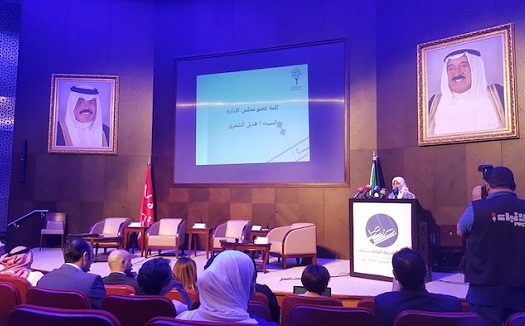 Her Highness Hind Al-Sabeeh during her opening speech. (Images via Reine Farhat)

This article is a crosspost with Nuwait.

It would be fair to say that women in Kuwait are making significant progress towards changing their status and contributing to the growth of the economy.

According to the World Bank Gender Statistics Data Bank, 45 percent of women in the country have contributed to the labour force, and that was in 2013. In addition to that, the number of firms owned by women reached 13 percent in 2014, according to The Global Gender Gap Report 2014 conducted by the World Economic Forum.

So what is stopping women from leading in entrepreneurship?

Four Kuwaiti women discussed just this, obstacles and opportunities for female leaders in the country, during a panel named ‘Women in entrepreneurship’ organized by the National Fund for SME Development on March 22 at the National Library of Kuwait.

“Kuwait is now witnessing growth in the number of women entrepreneurs,” said Her Highness Hind Al-Sabeeh, who also serves as the minister for social affairs and labor, as well as for planning and development, in her opening speech. “This reveals the role of women in diversifying the economy, creating new jobs and activating imports and exports.”

Supporting diversification in the economy, and women, is also a key objective for the fund, which aims to help SMEs in different fields like information and communications technology (ICT), manufacturing, creative and general services. It will also support women through mentorship and training programs, said Hadeel Al-Shammari, board member at the fund.

Over the past few months, we have met very inspiring women who led startups working in manufacturing and design,creative, ecommerce and more.

Yet the story of Mona Al-Shaikh was a bit unconventional and refreshing. Al-Shaikh, who could not make it to the panel but spoke in a video interview, is the founder of Engineering for Kids, programs designed to teach Science, Technology, Engineering and Math (STEM) for children. What was interesting about her story was her passion for cars, something that was revealed in her latest startup for car accessories, Bespoke Automotive.

Al-Shaikh admitted in the video that she did not know how to launch her business back in 2014, due to the lack of specialized mentorship services in Kuwait. Also, entering a male dominated field was not easy for her, she said, and people didn’t think she knew about cars enough or even expected to have a woman behind a car startup.

“Don’t expect money from year one. Think ahead. Your budget should last you for a year. There is no overnight success.”

Cars aside, women are launching businesses from the comfort of their homes, thanks to social media.

‘Instapreneur’, according to Hind Al-Nahedh, is a new term that came out of Kuwait. Due to the huge popularity of Instagram, “it has become an inexpensive method to test the market,” she said. “I get direct sales and transactions from the least cost possible.”

A good example of this is Je La La founder, Lulwa Al-Terkait, who launched her entire jewelry business on Instagram.

Kuwait’s high use of Instagram puts the country on the mobile map. “We are mobile 100 percent and tech savvy and we like to venture,” Al-Nahedh added.

Empowering women can take many forms. In the case of Fouz Al-Sabah, who is the cofounder of magazine Khaleejesque, it was through hiring a team of women only. 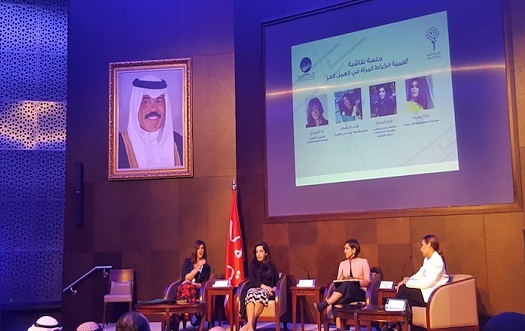 When asked if she faces challenges related to having a women-only team, she admitted that it was hard because “they all asked about working hours, overtime, working on weekends,” she said. “They are always scared because there are no guaranties.”

Al-Sabah is not pessimistic though. Despite knowing the hurdles of being at a startup, working for long hours and wearing many hats, she likes to be part of a growing community, instead of turning to the public sector which is saturated.

Rana Al-Nibari agrees. “80 percent [of the population] works in the public sector,” she said. “It is becoming a burden.” She calls for a reconciliation approach, that aims at reducing the cost of registering a company. “Opening a business in the US is done in one day for one dollar.”

Decreasing the cost of setting up might also help solve the problem of unregistered companies that are up and running despite it all.

Calling for more women in entrepreneurship was not enough. Al-Nahedh pushed women to help each other and get more involved in tech. Al-Nibari pushed them to be leaders, even at their own jobs. “I was never an entrepreneur, but any component for success is to fight the battle and work hard,” she concluded.

After the panel ended, local startups like 3DUtopia for 3D printing and prototyping, and a smart garbage bin that sorts waste automatically, were just a few of the female-led startups that were exhibiting their work in the entrance hall.