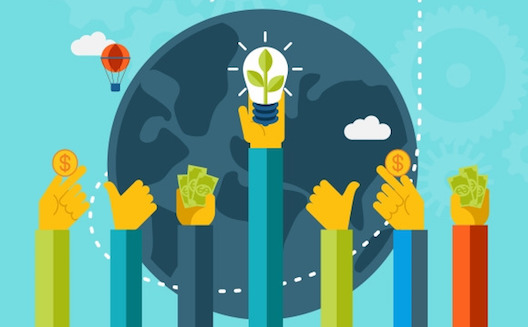 Since the launch of Indiegogo in 2008, which combined the power of community with the technology of Web 2.0, crowdfunding has been booming. One entrepreneur, Arnaud Pinier, wants to customize and focus this opportunity for the South Mediterranean region.

Pinier is the CEO of Morocco-based crowdfunding platform Smala & Co and consulting agency Happy Smala, specialized in collaborative consumption and open innovation. He recently published a report on crowdfunding in this region for SwitchMed, an EU-funded initiative whose objective is to ease the transition to sustainable consumption and production in the Mediterranean region.

Wamda asked Pinier his views on the future of crowdfunding in the region.

Wamda: Where do the funds collected in the South Mediterranean region typically come from?

Arnaud Pinier: Over the 2009 through 2015 period, 8 million euros have been collected through crowdfunding campaigns in the Arab countries of the Southern Mediterranean region. Until recently, most countries were using foreign platforms to get funding.

In the Maghreb, countries have to work with currency exchange controls [Editor’s note: They’re highly limited in their purchases and wires to and from foreign countries]. In Morocco, [local platforms] Afineety, which is still in the beta phase, and Cotizi, which has collected 75,000 euros of the 450,000 euros collected via crowdfunding in the country, are an exception; most of their funds come from abroad. It’s the same in Algeria and Tunisia.

Palestine doesn’t have its own platform, so funds come for foreign platforms and backers. Lebanon has a huge diaspora interested in giving back.

Wamda: What is the status of crowdfunding in the region today?

Pinier: We see three different stages in the Mediterranean. We have the Maghreb countries that have very tough regulations on this activity, a relatively weak entrepreneurial system, and a whole lot of online habits that are not favorable to the development of a web ecosystem.

In the Maghreb, we’re still at year zero of crowdfunding. Morocco has seen 450,000 euros collected via crowdfunding from 2009 to 2015. In Tunisia, it’s less than 300,000 euros, so we’re really at the early ages. Libya and Algeria are far behind Tunisia and Morocco.

The biggest funded projects in those countries are mostly charity or humanitarian. This is nothing disruptive or new. Associations have funded themselves via donations for 30 years.

The second group we can identify, and which is at a more developed stage, is in Lebanon, Jordan and Egypt. Overall, amounts average roughly a million euros over the same period [per country]. The types of players is centered around individuals and companies.

Palestine is more of an exception. A majority of campaigns are based on donations or are humanitarian in nature and are created by groups or associations. But, Palestine collects 1.8 million euros, almost twice as much as second-place countries Jordan and Lebanon.

Wamda: How do you explain the importance of charity?

Pinier: When you’re in a crowd-equity logic, you’re in it to make money and the collaborative logic almost disappears.  On the other hand, when it comes to donation, you’re confronted by the local culture; for many, donation only means charity, and it doesn’t make sense to them to donate for commercial purposes, or even cultural activities.

Regarding the lending model, there’s a fundamental problem of trust. With donations, you give and the interaction ends there. With equity, you’re in the mindset of having [shareholder] power.  But with lending, you’re dependent on the goodwill of the third party to reimburse its maturities. There’s almost no crowd-lending [in the local market], it’s less than 1 percent of all collected amounts, whereas in the rest of the world, it makes up 75 percent of the crowdfunding market.

Wamda: It seems like crowdfunding in the region is slow to take root compared to the rest of the world, why do you think that is?

Pinier: There’s one major block: online payment. As long as people won’t accept online payments, it will be complicated to develop a crowdfunding platform that respects the basic principles of transparency and security that any financial intermediary should follow.

Also, 99 percent of crowdfunding platforms in the world work on an all-or-nothing basis, meaning you only take the money if you reach the goal you set. It’s easy to implement with credit card payments, but with cash, it’s super complicated. [The absence of e-payment] is, in my mind, a real problem for the development of crowdfunding.

Wamda: What is the future for crowdfunding in the region?

Pinier: We’re in a sort of pivot phase because by May we should have legislation supporting crowdfunding in Morocco and this will be one of the first countries in the MENA a region to have a regulatory framework dedicated to crowdfunding.

I believe that if we’re able to put in place a regulatory framework and engage big local corporations, who act as a trust guarantor, it will be the ‘ahah’ moment for people.

If the bill passes, we [Happy Smala] should sign partnerships with banks, companies and foundations. For funders, it’s a different way to give money. Tomorrow, companies and foundations will use crowdfunding platforms to say ‘Ok we’ll give you the money, but we won’t give it to you unless you have an engaged community around you. And for every one euro your community gives you, we’ll give one more.” We’ll be able to make people leave the assistance or charity mentality and enter more of a market logic.

For banks, it’s about the issue of diversity of their portfolio. We’re discussing with a bank about the possibility of launching a crowd-lending platform because it can help a bank generate revenue and diversify its exposure to risk; if the crowd lends money, the bank doesn’t take risks and doesn’t have to immobilize funds.

Within one or two years, we could see the first crowdfunding platforms [in the region] supported by banks.

Wamda: That is if we can fix the trust issue, right?

Pinier: There’s a certain schizophrenia with the newest generation; there are the 15 to 45 year olds who already subscribe to the individualist ethos. Although they like to help out, this digital generation hasn’t quite adopted collaborative ways, in big part because of a deficit of trust. They’re fine with supporting the widow and the orphan, but supporting a friend or a smart kid looking to invent the computer of the future, it’s still very complicated.

We should rely on the previous generations, the over 50 year olds, who still give a lot of money and act as guardians of maintaining a supportive community based on mutual help. They have a role to play in the transmission of these norms to the younger generations.

In Morocco, the social and political model is also very bureaucratic. Institutions are strong here and have a huge influence on the engagement and actions of individuals. One doesn’t act without the approval of an institution, be it the father, the boss… all the way to the king. In this context, big national corporations have a fundamental role to play.

It’s up to you, big companies. If you don’t get the ball rolling, nobody will.