Panelists discuss the future of electronic and mobile payments in MENA. (Image via Sam Wendel)

For many finance industry thought leaders, it’s not a question of ‘if’ but ‘when’ electronic and mobile payments will flourish in the Middle East and North Africa.

Crucial indicators - like rising mobile penetration, a growing youth population, and improving technology - point to a future where MENA will follow global trends and transition towards cashless societies. As MENA approaches this critical moment in its economic evolution, the existing financial industry could be upended by this transition, or it could be the change agent.

At the 2nd Electronic and Mobile Payments in the Arab World Conference, held April 4 in Amman, financial industry players from MENA gathered to discuss how to lead the region’s transition into a world of electronic and mobile payments, rather than be left behind by it.

The event was divided into panels featuring experts from companies like Mastercard, Visa, the Central Bank of Jordan, Cairo Amman, and Uber, as well as local startups like Madfooatcom, Zoomal, and Liwwa. Here’s a rundown of the conference’s key takeaways.

Transitioning from cash to cashless

In a market where consumers rely heavily on cash payments, immature technology can discourage people from making the leap to cashless habits. One bad experience with a slow or unstable e-payment service can scare off a consumer permanently. 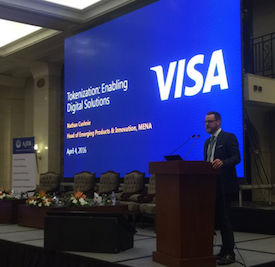 “The technology is there,” said Basel Eltell, the market manager for MasterCard in the Levant.

Financial institutions across MENA, like CBJ, are implementing the cutting-edge technology needed to foster a stable cashless economy. With infrastructure improving, the financial sector’s task now consists of education and advocacy. But that requires addressing cultural, logistical, and economic obstacles. And this is going to take some handholding.

One possible method raised at the conference were prepaid cards, which panelists suggested can act as a bridge between cash and cashless and make the transition less daunting.

Another mechanism championed were mobile wallets, which are essentially digital versions of physical wallets where users can securely store credit and debit card info on their phone. In the US, companies such as Google, Square, and Apple have all developed successful mobile wallets, and the technology is being trumpeted as the future of payments services.

In Jordan, the telecoms Zain, Umniah, and Orange all offer mobile wallets that allow customers to deposit money into an account and pay various bills from their phones.

Panelists highlighted this service as an innovative way to promote mobile payments by piggybacking on the growing acceptance of smartphones.

Financial regulations are generally enacted to protect consumers, but they can also inadvertently stifle innovation.

That’s because financial technology is a rapidly changing field and early regulation can cause unintended consequences as the industry evolves.

“It’s hard to regulate something that doesn’t exist,” said Ahmed Moor, the founder of peer to peer lending network Liwwa.

Too little regulation can also wreak havoc, especially when consumer data and large amounts of money are at stake.

“Preferably the market regulates itself, but it’s a given that this sometimes doesn’t happen,” said Basel Eltell.

Eltell also conceded that unless governments and central banks take an active role in implementing and regulating financial technology, then outside companies (like Facebook in India) can upend the market.

Panelists agreed that regulatory bodies like central banks play a pivotal role in establishing a healthy ecosystem for electronic and mobile payments.

"One of the main, tangible reasons for the success of e-payments is the government,” said Beidas.

The future of payments in the region

The conference’s final panel, fittingly, discussed the future by exploring the most fundamental obstacle preventing the adoption of e-payments in MENA: financial and economic inclusion.

"Many barriers for financial inclusion include, unemployment and our culture’s way of thinking,” said Dr. Adli Kandah, the director general for the Association of Banks in Jordan, earlier in the day.

Panelists stressed that improving data collection is vital. They estimated that there are 1.5 million bank accounts in Jordan, a country of roughly 7 million people.

Another issue raised was ‘access versus usage’, or how a person with a bank account can still be financially excluded. An example provided were individuals with bank accounts who only use their debit cards for ATM cash withdrawals.

Precise data is still scarce in MENA, or as illustrated above, can provide misleading conclusions. Filling the information gap is a crucial deliverable needed to solve the epayment riddle in MENA.

That was perhaps the day’s biggest takeaway. The technology exists. Unlocking electronic and mobile payments in MENA now depends on understanding consumers and what they want and need. And that is where the next frontier of financial innovation in MENA waits, ready to be found.