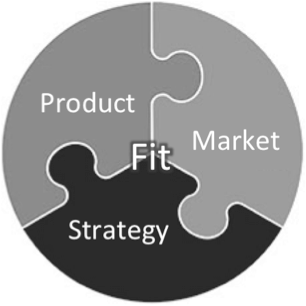 This is an edited version of an article that originally appeared on Medium.

Can strategy predict a big-time versus a small-time startup idea?

Assuming a product-market fit is found, can you fast forward and see whether your business will create and sustain monopoly-level profit margins? How can you efficiently search for a big-time idea with a product-market-strategy fit?

To evaluate your idea, check whether it has one or more of the following strategic levers:

Levers one and two apply for the early stages of a startup, and levers three to six can be reinforced at later stages but not at the beginning.

We can apply the framework I outlined in my article Starting from the end — Lean decision development:

When you form a hypothesis for an idea, run the following five minute thought experiment: Assuming my product-market fit is found and validated, how can I become the dominant player in this market? How can I defend and maintain such position? What strategic levers am I basing my decision on?

Iterate as much as possible in those five minute thought experiments before committing to a five day design sprint, followed by 10 weeks of business model canvas validation, and then about six months of building your minimally viable product.

Let’s take the example of Uber’s CEO. Before Uber, Travis Kalanick was approached to join Tweetbios, which allows Twitter users to have extended home pages. Even though Tweetbios was seeing growing user adoption, Kalanick quickly dismissed it as “a small-time idea”. So even if it supposedly had product-market fit, Tweetbios did not have product-market-strategy (PMS) fit.

On the other hand, it’s worth noting how Kalanick rationalized Uber’s PMS fit. As detailed by Fast Company, Kalanick saw Uber as a two-sided platform with cross-sided network effect, where the user experience improves as more people use the service.

Uber’s virtuous network effect cycle works like this: more users lead to more demand for drivers, which leads to less waiting time and better experience for users, which leads to an increase in demand from users. That’s a big-time idea.

As Uber grew, it started to tap into its economy of scope by expanding to goods and food delivery with UberRush, UberEats, and more, leveraging a small marginal drivers’ acquisition cost in this expansion of scope.

Product-market fit: necessary but not sufficient

Product-market fit as a topic and a concept has been widely discussed (see Marc Andreessen's blog 2007, Steve Blank in The Four Steps to The Epiphany, and Quora answers). If you examine Marc Andreessen’s post, there’s an implicit assumption that the market type being discussed is a new market type, versus other market types such as existing, resegmented, and clone markets.

For instance, startups working in a new market often inflate expectations in revenue growth forecasting by misreading traction signs from their early adopters and extending them to their mainstream adoption traction rates - when they still have a chasm to cross. The adoption pattern is different when targeting an existing market (see Steve Blank’s Market Type & Revenue notes).

For a new market, where no one has succeeded before, influential players in VC and entrepreneurship circles focus on product-market fit as strategy is less relevant if you have not even found a market to fulfill.

However, it’s very important to ask if you have what you need to win the market once you’ve developed a product-market fit. If not, can you plan to fill those gaps from the start? Are there threats in your value chain? Can you overcome them? Before spraying, praying, and potentially pivoting, can the product-market-strategy fit be a helpful measure for direction evaluation?

For an existing market, the market is there, the products are there. The discussion is more about how to enter the market, compete, win, and how this can be sustained with given strategic levers. Do you have a 10-times better technology or a 10-times better product? Are you thinking differently from the incumbent player?

Strategy is thinking differently: be contrarian and right

At its core, strategy is doing something differently rather than outdoing the incumbent in what it does best. This is an underlying theme in strategy courses.

Attempting to outperform the incumbent by playing the same game and saying that you will outperform him and that you will be more efficient is not a strategy. Operational effectiveness, for example better execution, is not a strategy. It is necessary but still not sufficient. Try to compete with Amazon on the only premise of becoming more operationally effective, and you will not win. You need different strategies to face the ecommerce bear.

In his book Zero to One, Peter Thiel searches for a secret, a contrarian truth, when he invests in startups and people. Without this contrarian truth, there is nothing novel. With a secret in hand, you should strive for a monopoly.

To plan for a monopoly-level profit margins, you have to look at strategy and know your strategic levers for your product-market-strategy fit. Can you know and play for a winner take all strategy?

The theme of being contrarian is so important and is often repeated by various influential individuals in the VC industry. The winners are the black swans who are able to win the market. Those winning ideas start as counter-intuitive, weird ideas. For instance, Paul Graham’s Black Swan Farming corroborated this idea, as did Ben Horowitz at his Columbia Commencement speech when he discussed Brian Chesky's secret in starting Airbnb, and so did Chris Dixon in his thesis on investing in the Weird Stuff.

A cautious note: there is no point in being contrarian if you’re wrong. Using the investment industry as an analogy - being greedy when you ought to be fearful when others are fearful - can be costly if you’re not right. Being contrarian alone is not sufficient, you have to be both contrarian and right.

The role of the founder-market fit

Once you form a hypothesis for a secret, try to iterate on it through quick thought experiments to refine it into a product-market-strategy fit. If you could not identify and defend the strategic levers of your idea, then more research and brutally honest thinking are needed before you move beyond the ideation stage.

Take Uber versus taxis, Airbnb versus hotels, Tesla versus traditional automakers - all are new players in established existing markets. The new players won because they knew a secret and their game was different.

For the long-term, a product-market fit is not enough. A big-time winning idea should have a product-market-strategy fit and the founders should be able to articulate its strategic levers.

How can you be the last mover and win the market? How would you build high barriers to entry for new entrants? How about big businesses, are you aware of your most pressing envelopment threat, and how can you plan and protect yourself from it? These are things to think about, search for, commit to, then reinforce and adapt through discovery by doing.

You should accept and be comfortable with the uncertainty and have a structured approach to deal with it. When you’re working at the bleeding edge, you draw, project, and build the future. When the struggle of uncertainty is your new normal, strategy becomes your best friend.

Strategy should be a core component and be given its own weight during the startup ideation stage, not be an afterthought once the product is built. Applying the filter of strategy can save entrepreneurs (and investors) valuable time and resources, and allow them to iterate faster and smarter to capture and maintain the value they create.