With nearly 80 million people in Iran you can imagine there is a huge internet audience waiting to be pounced upon.

Unfortunately, the Iranian gaming market doesn’t have a lot of useful insights for people in other Middle East countries and this is largely due to incorrect information coming out about an already foggy market.

In this article I’m going to cover some basic and exact information on demographics, politics and cultural context of Iran, as well as brief descriptions of the media, entertainment, telecoms and internet sectors. Tomorrow we will then take a look at the gaming market in Iran.

One of the main reasons is the lack of reliable data collection centers in Iran.

Thanks to this western data gathering centers, with their lack of direct access to reliable data sources, often estimate the statistics incorrectly. For example, Newzoo a global market research and predictive analytics firm with a primary focus on games, normally provides 100 percent correct revenue projections for various countries but for Iran, the percentage of information correctness would be around 60-70 percent.

According to Iran's Ministry of Communication & Information Technology, by the end of this year (the Iranian year starts March 21), the internet penetration rate will be at 65 percent.

When it comes to how Iranian internet users access the web, the primary tool is their mobile phones. Second to this is ADSL (asymmetric digital subscriber line), internet through your land line.

This statistic shows the mobile 3G network penetration rate has reached to 38.67 percent, this means that just over 29 million Iranians use mobile phones to access the internet.

According to other connectivity indexes in Iran, there are almost seven million users using dial-up connection to access the Internet, the penetration rate of this obsolete technology is 9.23 percent which has 3,467,380 subscribers. 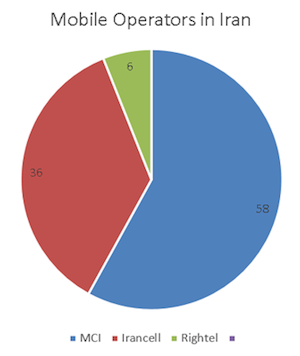 According to latest reports from Ministry of Communication and Information Technology there are nearly 70 million active subscribers to these three networks.

All three of them offer 3G-4G internet services to their customers.

Iran is forecast to account for 40 million users for the smartphone market by the end of this Iranian year (March 2017).

When it comes to the devices being used, approximately 78 percent of the population are on Android, with 13 percent on iOS and the remainder on Windows-based mobiles.

The most popular internet browser in Iran is IE (Internet explorer), although it’s old fashioned in many ways most of the Iranian official websites, which tend to belong to governmental organizations, are compatible with it - so it’s what you’ve got to use.
Check out the next installment tomorrow looking at Iran's gaming market.
All images via Hassan Mehdiasl.