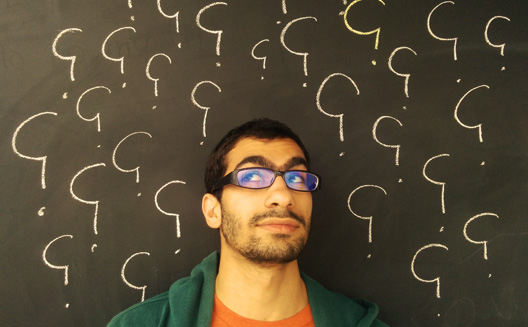 Have you got what it takes to be an entrepreneur? (Image via Rachel Williamson)

If you’re working in a corporate job and have a startup idea, you’re probably wondering: should I quit my job, wave financial security goodbye, and pursue the startup dream?

You’ve done your market research so you’re pretty sure it could work, the one thing you’re not sure about is you. Do you have what it takes? Are you ready for the sacrifice?

The Moroccan team behind Hidden Founders has released an app that could help with that answer.

Officially launched on Tuesday and available for iPhone and Android, Founder Test's 10 questions spits out a percentage that should give you an idea of your level of startup knowledge.

“The most important thing is that nobody found the test cheesy or easy to crack, most first time founders found it confusing a bit, and that's the idea, that's what we are looking for: to make them pause before jumping in the startup game and read, acquire knowledge that might help prevent months or years of mistakes.”

The questions include ‘what should you look for in cofounders’ and ‘how much time does running a startup take from your daily schedule’, and has wannabe entrepreneurs think about how relevant their idea is, the sacrifices they have to be ready for, whether they have the required traits to make a startup works, and if they have the right team. 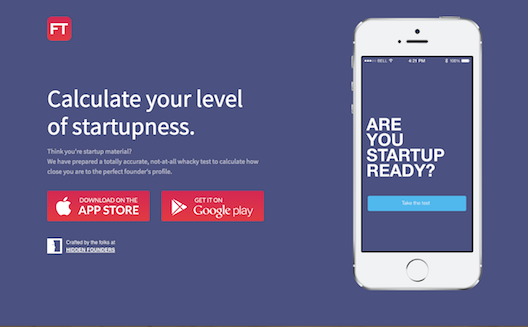 Founder Test will help you calculate your level of "startupness." (Image via Founder Test)

Based on the startup bible

The questions are based on the famous essays of Paul Graham, which, put together, are often likened to the startup scene’s ‘holy book’.

“I've always been a big fan of [Paul Graham] like most of us here. [His blog] was my first contact with the startup world and I'm glad I learned my basics there,” said Kachchani on Product Hunt.

Vice president of products Omar Madi explained on Product Hunt that they tried to formulate questions in a way that wouldn’t influence readers - as much as this is possible in a Q&A - and they used coefficients to calculate the answer rather than a right/wrong system.

“Launching a tech startup is no exact science,” Madi wrote. “Each context, stage, challenge requires a set of specific decisions.But still, there are best case practices that proved to be highly effective in most of the situations. Reason why, in the test there is no right or wrong answer. We gave to each answer a coefficient that is representative to how far or close it is from the field agreed-upon best practice advice.”

Although their official goal is “to point more wannabe founders to Paul's essays”, Kachchani admitted that they’re hoping this would attract aspiring entrepreneurs to their company website. “Giving back before talking business,” he said, in a very Paul Graham-way.

Hidden Founders is an agency acting as a ‘temporary CTO’ for international startups. Behind the company, which is based in Rabat, Dusseldorf and Cologne, is a team of serial entrepreneurs including LaCartePlz’s Kachchani, and hackers.

I personally got 73 percent at the test, I guess this is an advantage of the job! What about you?