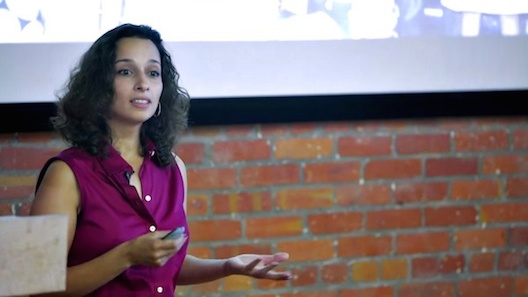 Yasmine Mustafa pitching her product, Roar For Good, during an event in Philadelphia. (Image via Tec.co)

This is a crosspost with Nuwait and part of a new series they have on expat entrepreneurs.

If entrepreneurs are born, not made, Yasmine Mustafa is a case in point.

When Mustafa was walking in the streets of Philadelphia one day, she saw a woman being grabbed and assaulted. No one came to help.

Traveling through South America made her realize that what she witnessed in Philly was by no means unique.

“I came back from a six month solo-trek across South America with a sad realization – violence against women was a worldwide problem,” she told us.

This has led her to cofound ROAR for Good in 2015, a startup that offers “smart” jewelry that sends an alarm when a woman is in danger. She crowdfunded on Indiegogo and raised 85 percent of her goal in just two days.

Roar for Good was not Mustafa’s first startup. In 2009 she launched 123LinkIt.com, a company that helps bloggers monetize their content. Then in 2011, she brought Girl Develop It to Philadelphia, an international organization that empowers women and teaches them web and mobile development.

This Philly entrepreneur was able to build a name for herself and empower other women through her work, but her path was incredibly difficult. In February 2016, she was asked to speak at TEDx Talk Philadelphia about her journey and how she and her family were part of the evacuation to the US during the 1990 Iraq-Kuwait war.

Mustafa left Kuwait when she was 8 years old. Her entrepreneurial streak appeared at an early age. She began selling candy to her classmates when she was just 9 years old.

Her many interests meant that she changed majors many times before she eventually earned her degree in entrepreneurship from Temple University.

She faced many obstacles, some typical, some not. Like many students, she took on a lot of part-time jobs so she could pay for tuition. Following the 9/11 terrorist attacks, her boss asked Mustafa if she knew how to fly a plane, and fired her a few days later.

Nuwait: Why did you change majors so often in college?

Yasmine mustafa: I couldn’t figure out what I wanted to do. My dad enrolled me as a mechanical engineering major when I started. I immediately rebelled, and after falling in love with my Photoshop elective the first semester, I switched to graphic design. [Then] I decided to enroll as a psychology major because I’ve always been interested in people and their motivations. After paying for the tuition, I realized it would cost me too much - after my bachelor’s, I would have to stay in school to get my master’s in order to get a well-paying job. That’s when I learned about the entrepreneurship major at Temple University.

Nuwait: How’s the ecosystem in Philadelphia?

Mustafa: The tech ecosystem here has grown by leaps and bounds since I started my first company. We [Girl Develop It Philadelphia] used to have one tech event a week, tops, and now there are multiple events a night. Our tech groups were siloed and while some are, they’re bigger and work together more than ever. There are economic incentives to starting businesses here from the local government, we have a lot of talent from UPenn, Drexel, and Temple. In fact, there are 102 colleges within 50 miles of Philadelphia, and the standard of living is cheaper than most other top cities in the US.

Nuwait: Being a woman in the tech field, did struggle to be taken seriously?

Mustafa: I get this question a lot and I didn’t notice it until it was asked. It hasn’t been enough of a challenge for me to ponder endlessly. There are moments when other people in the room look surprised when I introduce myself as the CEO of my company. Aside from that, I’ve talked to a couple of investors that didn’t seem to take me seriously at first impression but that changes when I open my mouth to talk about what I’m doing. I love what I’m building and it’s evident I know what I’m talking about. Then gender doesn’t matter.

Nuwait: What do you advise women looking to start their own business?

Mustafa: Build relationships with people in your industry and surround yourself with mentors who can help you with connections, advice, and inspire you when things get tough.

If you're a non-techie building a tech company, learn how code so you can make smarter decisions and communicate with developers better. Find someone that complements your skillset and challenges you to be a better person - you'll feel less lonely and be able to do a lot more.

It is unlikely that Mustafa will go back to Kuwait, however she’s planning a trip soon. She even offered to share her expertise with local entrepreneurs here in Kuwait, next time Nuwait plans an event. “I became a US Citizen three years ago and I am planning a trip to Kuwait and Jordan (possibly Egypt) in the fall of 2016.”