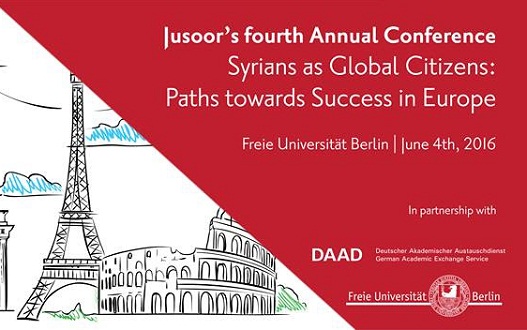 As the Syrian conflict enters its 5th year, thousands of Syrians have left their homes as refugees, with many settling in Europe. Jusoor’s fourth annual global conference will be held on June 4 at the Free University of Berlin in Berlin, Germany.

The conference will focus on higher education, innovative non-formal projects, career development, and social integration for Syrians in Europe, and will follow 5 themes of discussion:

Higher education for Syrians in Europe

Communities around the world continue to call for a no-lost-generation of Syrian youth, including access to university studies. We seek to shed light on the status of higher education for Syrians in Europe in general and specifically in Germany as a case study, looking at successes and challenges.

Social intergration and thriving for Syrians in Europe

An astounding number of Syrians have moved to Europe recently as refugees or forced migrants. This conference looks at how to foster and accelerate the creation of healthy relationships between Europe’s current citizens and their future citizens.

Career development and opportunities for Syrians in Europe

Thousands of Syrians have moved to Europe in the past year, including students, young and senior professionals, and previous business owners. The conference aims to shed light on how the European market has enabled this human capital through sharing success stories, challenges, and opportunities.

Similar to its last three conferences — New York in 2012, London in 2013, and LA in 2015 — Jusoor expects this conference to draw over 200 participants from around the world, including Syrian leaders in all fields as well as students. They have speakers lined up from Kiron, Ideas Box, Refugees on Rails, Workeer, NetHope, the German Academic Exchange Service (DAAD), Syrisches Haus, the Syrian Researchers initiative, Freie Universität Berlin, and many more.

The event will end with a fundraising dinner for the guests with performances by the Wajd Ensemble and Khaled Al Hafez, both of whom embody the art of prominent and emerging Syrian artists.

Register as soon as possible to confirm your spot - spaces are limited.