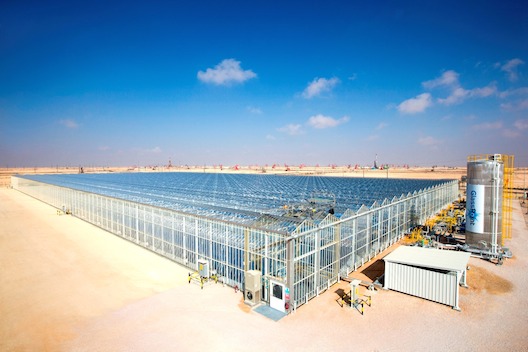 This article is an edited crosspost from the MIT Technology Review Arab Edition.

The $600 million Miraah project in southern Oman will deliver the largest peak energy output – 1,021 megawatts – of any solar plant in the world by harnessing the sun’s energy to produce steam that can be injected into an oil reservoir. Heating the oil makes extraction of viscous crude, also known as heavy oil, considerably easier and cheaper. Miraah, which will span three-square kilometres upon completion, will use concentrated sunlight to generate 6,000 tonnes of solar steam per day. The project is spearheaded by state-owned and Shell-led Petroleum Development Oman (PDO) which accounts for 70 percent of Oman’s oil output and GlassPoint Solar. Construction on the first of the 36 glasshouses that make up the project began last October with the first steam on track for 2017.

Economic and energy efficiency is particularly coveted this year by Oman and the wider Gulf’s energy centered treasuries, as a glut of oil has depressed prices by nearly 70 percent since June 2014 to around $30/bl this year. Oman’s 2016 budget outlines a 33 percent reduction in oil and gas revenues, to 6.15 billion Omani Rial ($16 billion) – an ominous outlook for the Sultanate that typically relies on the sectors for over three quarters of its revenues. In 2014, Oman’s State General Reserve Fund (SGRF) led a $53 million investment in GlassPoint along with Shell and others to ramp up the deployment of solar EOR and the potential benefits stretch far outside the Sultanate’s borders.