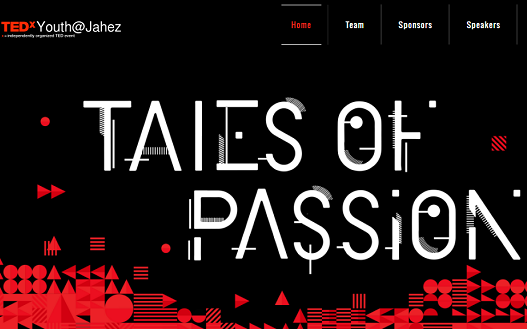 TEDxYouth@Jahez is Syria's first TEDxYouth platform. It will launch its first event on Saturday, May 21, at a private venue in Mazzeh, Damascus, and sponsored by UNFPA and MTN. The event will be themed "Tales of Passion".

11 passionate Syrian youth will be speaking about social, educational, technological and artistic innovation in the Syrian communities. They will speak about their own experiences in entrepreneurship and other initiatives launched to foster progress in the face of the debilitating Syrian war.

Here are some of the speakers:

A computer scientist at Damascus University, Ajjaj is currently experimenting in the field of Internet of Things (IoT). He has won several rewards and prizes, including second place at Startup Weekend Damascus.

Boran is an international educational development professional currently working at the Secretariat of the United Nations Secretary-General’s Global Education First Initiative (UNSG GEFI). As a former beneficiary of youth empowerment programmes herself, she is a strong advocate for the power of capacity building of young people through education. Boran will be sharing her story about finding her passion connecting the dots in her pursuit of it.

A passionate techie and self-taught graphic designer and translater, Ghalia helped in organizing several events across Syria, including those by World Merit Syria and UNFPA, before founding Magma.

Majd is a seventeen year old high-school student who is a self-taught  programmer and co-founder at Aprecademy. He is eager to share his various upcoming projects with the audience.

Tarek is a fifth-year medical student at Damascus University. He is not only passionate about computer sciences and tech entrepreneurship, but active in the medical field as an employee for the UK-based Cochrane collaboration, a healthcare company and project manager at the Ahyaha medical project in Syria.

TEDxYouth@Jahez is an independently organized TED event that brings together some of the leading minds and influential young people in Syria. Its organizers aim to hold yearly conferences and monthly/weekly meetings to spread worthwhile ideas. Indeed, three weekly meetings have been held so far in Syria's TEDxYouth@Jahez.

Each talk will range from 3 to 18 minutes, and attendance is FREE to all.

Don't forget to send an email to TEDxYouthJahez@gmail.com.

In conversation with Alfred Chuang