The world of entrepreneurship news is a complicated one to navigate. To help, here’s our roundup of what we’re reading on Elon Musk’s Mars colony, rebranding Brangelina, and a little something to lighten the end of the working week.

Elon Musk feels fear “quite strongly”. In an interview last week with Y Combinator, the SpaceX CEO wanted his audience to know that he is not without fear… but there are times when something is important enough that you do it in spite of fear. “People shouldn’t think I feel fear about this and therefore I shouldn’t do it. Something that can be helpful is fatalism. If you accept the probabilities, then that diminishes fear,” he said. As Musk prepares to conquer Mars and beyond, we would say that strategy is working. Catch him on September 27 when he is expected to finally disclose how on Earth he plans to found a Mars colony.

Speaking of the skies, DARPA seeks order for overhead drones. Dubbed Aerial Dragnet, the US government’s defense research agency wants to develop a system similar to air traffic controllers for passenger planes, but for drones. Many of DARPA’s programs, like the internet, eventually trickled down to civilian hands and the agency predicts just that for this program. It’s also preparing for an inevitable reality: drones hovering above urban cities is our future. Excuse us while we wash off that feeling of privacy violation.

In other US news, young startups are on the decline. Ten percent of the world’s public companies, among them Apple, Alphabet, and Microsoft, generate 80 percent of all profits. Firms with more than $1 billion in yearly revenue make up around 60 percent of total global revenues and 65 percent of market capitalisation, according to the McKinsey Global Institute.

With those numbers, it’s no surprise that it’s a hard-knock life for a US startup. According to a study published in December by the National Bureau of Economic Research, entrepreneurship in the US has declined across several decades. The report argues that since 2000 there’s been a “decline in dynamism and entrepreneurship [...] accompanied by a decline in high-growth young firms.” Old, white men still dominate the tech scene, what’s new?

Wamda of the week: Speak your own language. Mohamad Najem, cofounder of Social Media Exchange, wants MENA companies to up their Arabic game. In 2015, the population of the Arab world reached 375 million, of which 41.5 percent use the internet. Digital Arabic content stands at 3 percent of global content since 2015 with no growth since. It’s a lost opportunity to reach the 50 percent of the MENA region that only speaks Arabic. 3eib.

Travel tech: numbers vs. hype. Travel tech is looking pretty good right now. In this week alone, Google launched their new travel app and Airbnb acquired Trip4real. According to CB Insights, travel tech startups in 2016 raised over $2.5 billion across 196 deals. "However, deals are down, while dollars are ticking back up, albeit far from the peak we saw in 2015. Also, an increasing number of travel tech deals are moving overseas — 67% of deals occurred outside the US thus far in 2016.” The crux of that funding has been allocated to Airbnb. Here’s a chart on the top 10 most funded travel tech companies. 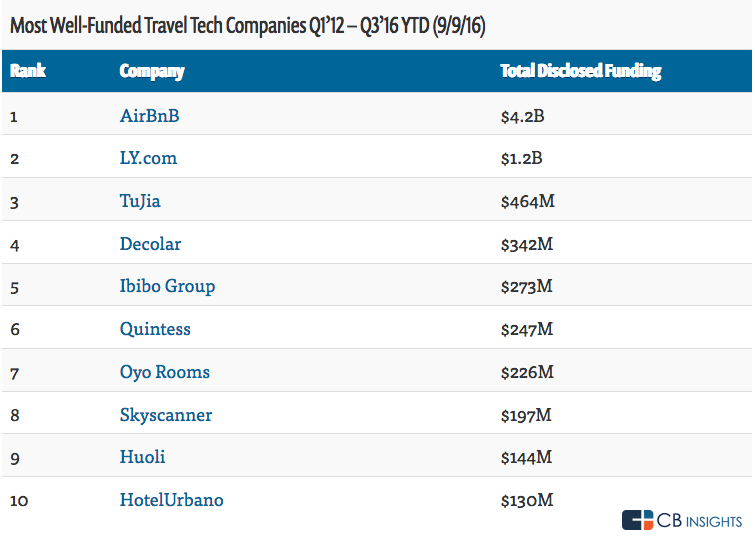 Brangelina, a lesson in personal branding. Both Jolie and Pitt’s public images were reframed and boosted when the hot couple got together 12 years ago, so it will be interesting to see how their public identities change post-divorce. While the news is still fresh, the celebrity couple may take a page out of companies like Volkswagen’s playbook, who’ve had their fair share of PR hiccups lately. For starters, how will the Jolie-Pitt Foundation, which has given millions to organization like SOS and Doctors Without Borders, be renamed?

Saudi teen wants a hijab emoji. Seeking a more inclusive and accurate emoji representation of herself and her peers, 15-year old Rayouf Alhumedhi sent a seven-page proposal for hijabi emoticons to Unicode Consortium, the organization that reviews and develops new emojis. She also took part in an unnecessarily heated Reddit AMA, noting that the emoji will represent millions of women across the world. “Roughly 550 million Muslim women on this earth pride themselves on wearing the hijab. With this enormous number of people, not a single space on the keyboard is reserved for them,” her proposal notes. That’s what we call taking initiative.