Fourteen years ago a group of Arab scholars drew a sobering picture of the Middle East: that it would need 140 years to just double its per capita income.

Fast forward to 2016 and the region has gone through changes that can only be described as epic: revolution and war have upended entire countries, yet technology adoption has provided people with a vast array of opportunities.

During that time, from when that first Arab Human Development Report (AHDR) was published in 2002, the factors affecting the region have changed, influenced by politics and technology and have bred the conditions for entrepreneurship to flourish.

The 2002 report highlighted three key deficits that impede human development in the Arab world, an area that spans Oman to Morocco: “freedom, knowledge and woman-power”. The authors said “only 0.6 percent of the population uses the Internet, and 1.2 percent have personal computers”.

Fast forward one decade and the internet had become widely available. ‘Digital’ Arabs began to share news. They started to speak their mind. Then they took to the streets.

This became known as the Arab Spring. Its scale surprised its own activists. Its aftermath scared them.

Half a decade later it can be framed as the beginning of a deep transformation, one that is less obvious than millions of people gathering in Tahrir Square but much more likely to succeed in the long run.

A society's values form the decisive factor needed to build democracies: this is why foreign interventions and protests by educated urban minorities most often fail. It also explains why democratic constitutions on paper don’t necessarily translate into democratic societies.

Instead, it is technology in general and the internet in particular that has played a prominent rule in driving emancipative values around the world, thus facilitating what German political scientist Christian Welzel calls human empowerment. This is why the effect of the internet is felt the strongest in the Middle East, today’s most unfree region in the world.

It is in this context that the emergence of 1,000 - 3,000 tech startups in the MENA region over the last decade is a historically unprecedented event. They advance most goals of the uprisings: startups attempt to solve pressing problems, its founders think bottom-up, they create jobs in the knowledge economy, drive transparency, further digitization and inter-regional trade.

This emerging knowledge economy is a historic chance for failing rentier economies.

For a variety of reasons, the modernization and industrialization project failed in the Arab world. Its economies are largely build on “unearned income streams” of natural resources, remittances and foreign aid.

The global rise of tech companies shifts the emphasis from large scale manufacturing clusters to innovation clusters. In fact, a 10 percent improvement in the region’s entrepreneurship ecosystem could add $700 billion to the region's economies - the equivalent of adding another economy of the size of Saudi Arabia’s to the region.

As 2016 comes to an end, two trends emerge. Combined, they could severely hinder or significantly accelerate the role of entrepreneurship.

(1) The arrival of big money. For years, entrepreneurs and investors rightfully complained about the small amount of money that went into the digital economy compared to real estate, retail and logistics. Then came 2016. Oil prices reached historical lows and two tech unicorns emerged.

Saudi Arabia created a $100 billion fund, a volume of money larger than the total GDP of Oman. If only 1 percent of this money was being invested into MENA startups it would exceed the combined disclosed funding from 2011-15. In the same vein, the chairman of Emaar announced the launch of an ecommerce platform with an initial funding of $1 billion.

In a positive scenario all of this will create wider support for entrepreneurship, starting with data-driven decision making to address bottlenecks and catapult the region closer to its true potential.

In the worst case, this amount of money will destroy much of what has been achieved over the past decade. The network effect - where the more users a job portal, social network or ecommerce venture has, the more attractive it is for new users and sellers to join - creates oligopolies that could sweep away many otherwise-sound startups. 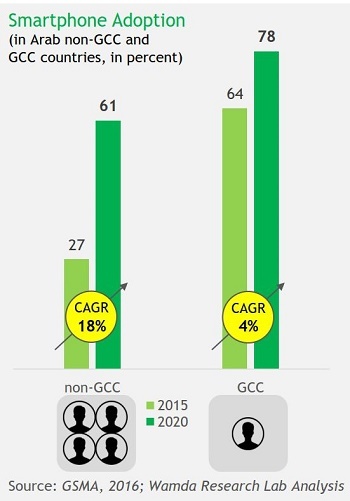 (2) The arrival of smartphones. The GSMA estimates that by 2020 smartphone take-up in the Arab non-GCC countries will reach thecurrent adoption rate seen in the Gulf. This is significant because these countries represent 80 percent of the region’s population and half of its GDP.

Low-end smartphones, as well as faster and cheaper internet access, give access to the digital economy to less affluent majorities and those living in rural areas. For both, technology is less about convenience and more about the potential for better access to education, information, energy and health services, and financial inclusion.

The  latest edition of the AHDR, published at the end of 2016, warns of more unrest to come. The highly recommended read provides a shock, a warning, and a vision.

The warning: By 2020 almost three in four Arabs will live in a country at risk of violent conflicts. As the cycle of poverty, corruption, exclusion, extremism, repression and the diversion of development budgets into arms purchases continues, entrepreneurship remains far below its potential.

The vision: Youth and the development of its capabilities and opportunities needs to be put at the center of national strategies across the Arab world. Ministries need to hold consultations with youth organizations and representatives. Civil society needs to be encouraged and public-private partnerships designed to provide youth with access to resources and skills. Decision makers can seek inspiration from international examples where countries started to leverage innovative solutions including micro insurance, mobile money, and e-learning.

The report goes to good lengths to propose detailed steps along this way. If a couple of nations follow Tunisia’s example, development and entrepreneurship will go in hand, forming a positive, self-reinforcing cycle.

As of today, the number of startups serving the bottom of the pyramid are relatively limited. Most fast growing, well funded companies work in ecommerce, content, travel and leisure.

But even the rise of those startups took time - it took traditional investors a decade to understand that ecommerce was a viable investment.

With this vision, national security could be improved and economic growth accelerated through increased interregional cooperation. It sees a long-term goal with the free exchange of goods, capital and people inside a union of Arab nations.

Entrepreneurship concerned with solving socio-economic problems can’t wait another decade. A part of the huge amounts now being set up for startups in the GCC region need to be invested in the Levant and North Africa. This can help to rebuild destroyed countries and positively contribute to local development. Stability and the return of investors’ confidence is in the interests of all.

In addition, startups catering to the masses will need more support from ministries, universities, corporations and the diaspora. The moment that happens, entrepreneurship wins. Otherwise everything will stay as it has been in the past, that is, widespread unrest will hit North Africa in 2017, as it did in 2001, 2006 and 2011.

We are either in the midst of a ‘calm before a storm’ that will undo much of the achievements of the past years, or the growing entrepreneurship ecosystem is integrated into an action plan that can improve the lot of Arabs throughout the region.