Every month, someone opines that MENA has a “relatively nascent” startup ecosystem, while others spot the “next Silicon Valley”.

So where does MENA really stand at the beginning of 2017?

The Global Entrepreneurship Index 2017 (GEI) puts it at dead center, globally, and suggests that if the region made a 10 percent improvement in the conditions for entrepreneurship, the collective economic benefits would be worth $700 billion.

By taking a deeper look, however, it becomes clear that overall there’s been no progress over the last year.

The GEI is an annual report by the renowned GEDI Institute. It’s the most exhaustive, academic framework in the world that offers benchmarks such as economic freedom, urbanization and technology adoption to measure a country’s readiness for the digital economy and tech entrepreneurship. Among the 137 nations assessed are 13 countries in MENA.

For each country, three sub-indices are calculated based on a total of 14 pillars. Each pillar consists of an individual and an institutional component - for example, the pillar ‘startup skills’ is calculated based on the share of respondents who think they have the skill set to start a business, and the national share of university graduates in a country.

So, where do we stand today? Based on the latest edition of the index, there is an easy and a complicated answer to our question.

The easy answer: MENA is the world’s third most developed region

Out of six regions, MENA takes the third place. Scoring close to 40, MENA stands almost on average between North America (60) and Sub-Saharan Africa (20). It is notable that this is driven by its strong aspirations, but held back by relatively weak abilities. 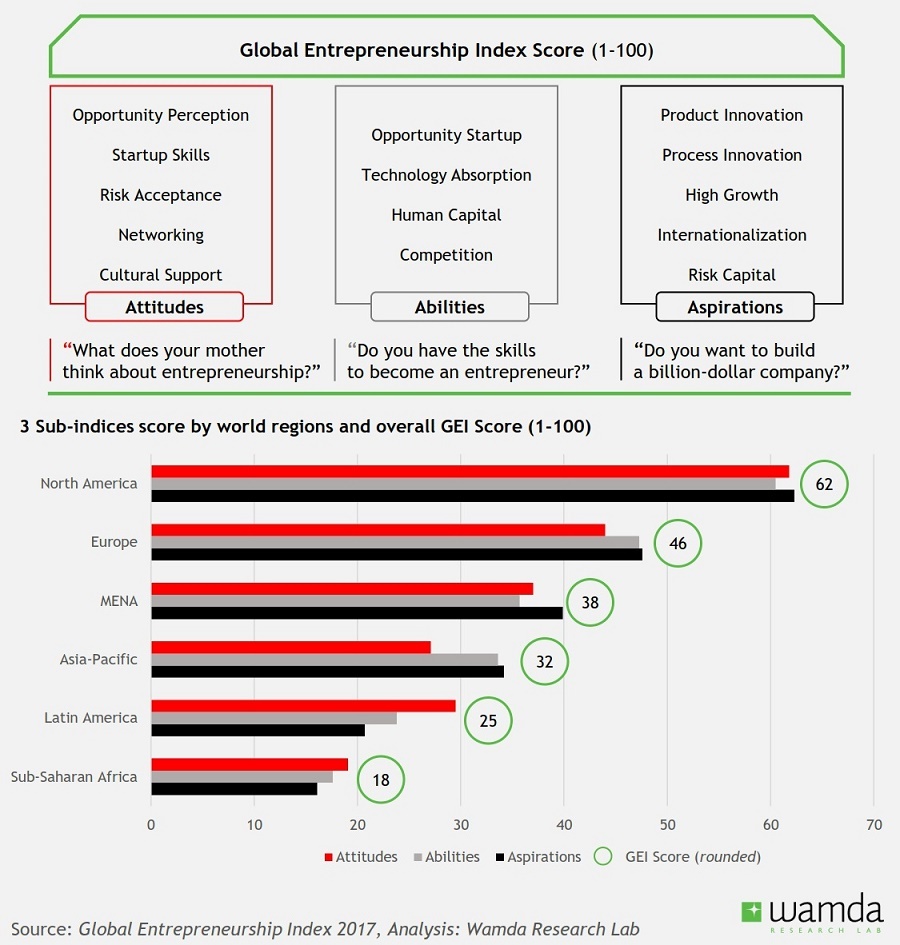 The complicated answer: MENA is the world's most diverse region

The GEI finds that generally the regions it measured are relatively homogenous. Not so in MENA. It turns out that the 13 nations cover the whole strata of socio-economic conditions, with some scoring almost 60 (the average of North America) to others with scores of barely 20 (the average of Sub-Saharan Africa).

Six of the 13 countries are GCC nations and seven are outside the GCC. GCC economies account for half of MENA’s GDP, yet they only account for 20 percent of the population, so the official MENA average gives Bahrain the same weight as it accords to Egypt (0.5 million inhabitants versus 90 million inhabitants). 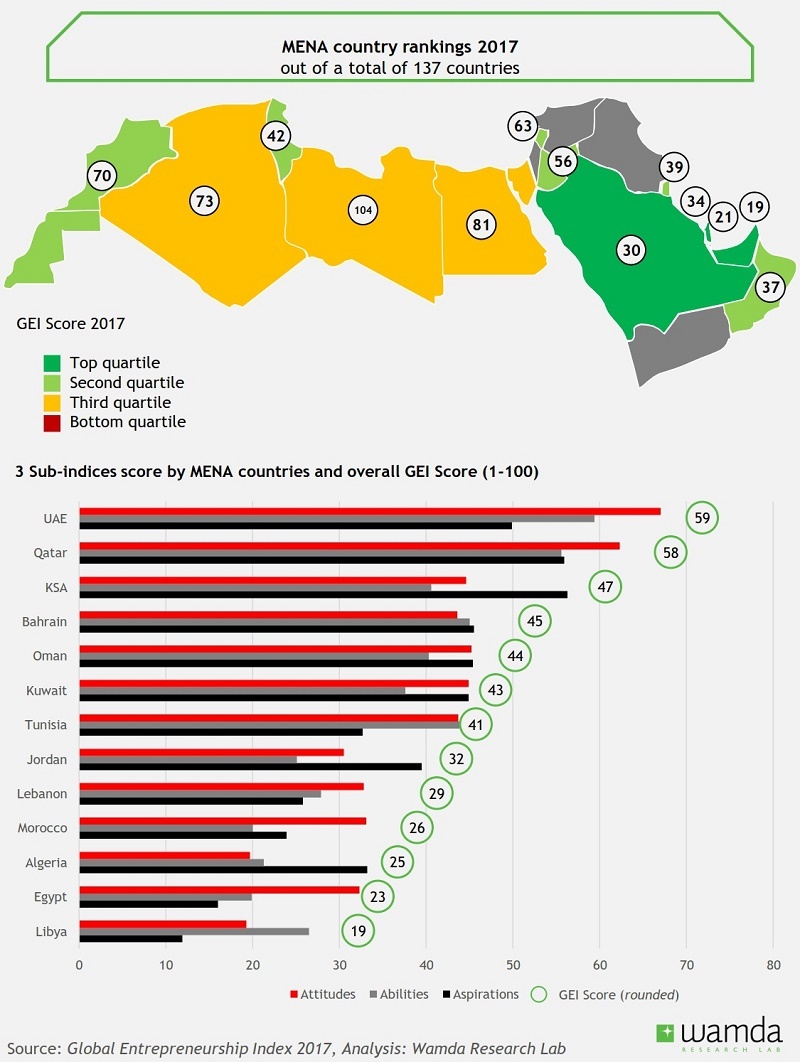 The bottleneck curse and the $700 billion opportunity

The GEI uses an algorithm that penalizes significant inequalities within a nation’s ecosystem.

A country that has a relatively even score across the 14 pillars can unlock synergies, whereas a remarkable disparity between, say, its human capital and the available risk capital creates a harmful imbalance.

Bottlenecks that remain unaddressed can, over time, lower the performance of other indicators. For example, a lack of risk capital holds back the number of scaling companies (internationalization), accelerating brain drain (human talent) as well as technology absorption, which also lowers networking, leading to less risk acceptance and diminishing cultural support. 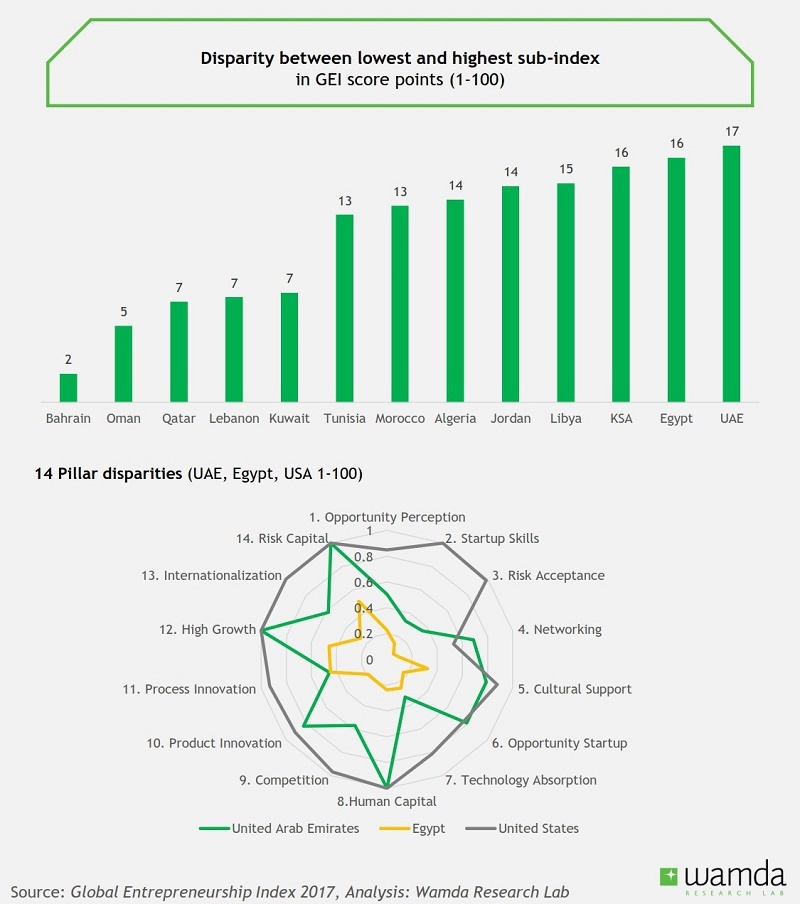 The US - definitively the world’s most developed ecosystem - has a relatively even performance.

In MENA, by calculating the difference between the highest and lowest score across the three sub-indices of each country it becomes clear that two in three national ecosystems display a disparity of 13 to 17 points on the 100 point scale. What is striking is that this imbalance includes the best (UAE) and worst ecosystem (Libya).

This should serve as a wake up call for policy makers, business executives and ecosystem stakeholders.

The authors of the GEI estimate that, if the 13 countries achieved a 10 percent improvement in the conditions for entrepreneurship, the total benefit would amount to over $700 billion - a figure equivalent to the GDP of the region’s largest economy, Saudi Arabia. 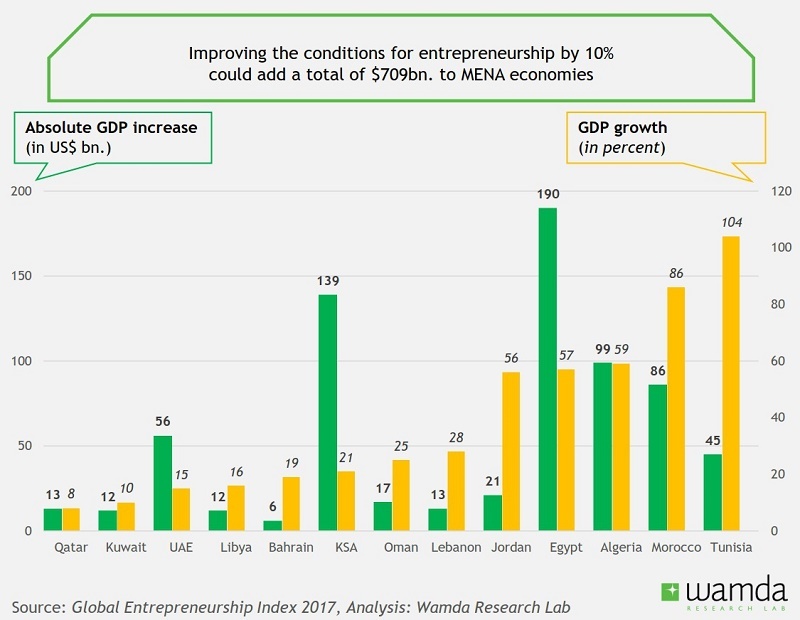 Tunisia, within only a year, jumped from 62 to 42 in the index. This made the country the second fastest improving ecosystem globally, and should be noted by MENA ecosystem stakeholders that haven’t looked beyond the Egyptian frontier so far.

The jump is great news for Tunisians. If they were to achieve that 10 percent improvement estimated by the GEI report they would generate a 104 percent growth for the economy, making the country the largest beneficiary of such an improvement based on the size of its economy.

The ranking changes of the other countries, however, is sobering. MENA’s average deteriorated from 41.1 from last year to 37.5. In fact, Tunisia is an impressive exception in a region where all countries fell back during 2016. 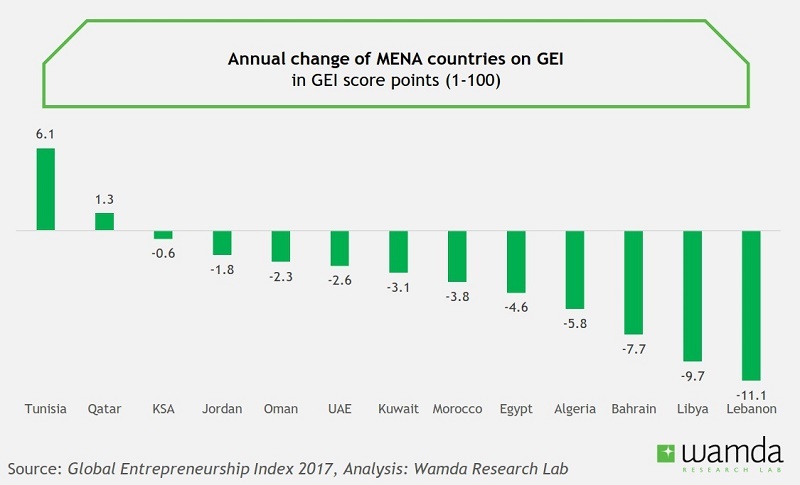 What the index doesn’t show

The authors of the report concede that the ‘hard’ facts of the GEI don’t take into consideration the ‘soft’ facts each country exhibits. This explains why all GCC countries rank higher than their peers, although no MENA ecosystem comes close to that of the UAE (similarly, the Economist was surprised about the low ranking of Hong Kong in the index).

The index measures the degree to which countries advance their full potential, so the 100 score index can be read as the percentage of unlocked capabilities.

Upcoming research by Wamda and others clearly shows that the UAE, followed by Lebanon, Jordan and Egypt, account for the majority of startups and the vast share of investments both in deal numbers and size. Viewed through this lense, the four countries have witnessed clear improvements year on year, with 2016 marking the emergence of the first Arab unicorns: Souq.com and Careem.

However, what the GEI index says is that Egypt (23), Lebanon (29) and Jordan (32) still haven’t even reached 50 percent of their full potential.

What needs to be done

The GEI offers a powerful tool for researchers and policymakers to identify bottlenecks and understand their countries’ standings compared to regional and global peers. An ecosystem is not build with more fancy coworking spaces, nor with annual talk of a global star in your local city, and not by throwing large amounts of money at two or three fast growing startups.

Building a thriving ecosystem requires, first and foremost, a clear understanding of what works and what doesn’t and this, in turn, requires sound methodologies, more reliable and openly accessible data, as well as public and private research. In fact Iran, the fastest improving country in the world last year, had used the GEI report to address critical barriers to entrepreneurship.

Every researcher on entrepreneurship, especially in the data-scarce Middle East, should study the findings carefully.