Recently, we published a feature on the battle of the startup hubs in the Middle East. There are several cities across the region, attempting to lure startups to their lands in a bid to boost and diversify their economies. But in their attempts at doing so, the competition might derail collaboration between them than encourage it.

A hub is not so much about the city but rather a location that can cater to multiple geographies and provides easy access to market. There are many factors that contribute to this and while some hubs in the world have emerged organically, like Silicon Valley, others have been purpose-built in a bid to foster innovation and collaboration between the different stakeholders.

As entrepreneurship has grown worldwide, this helix has developed into a pentagon, adding entrepreneurs and their lifeline – capital to the mix.

But in the Middle East there is another essential aspect to ensuring the success of a hub and that is the quality of life. In a part of the world that has more experience with conflict than innovation in recent times, attracting the best quality talent requires offering better living conditions and good infrastructure. 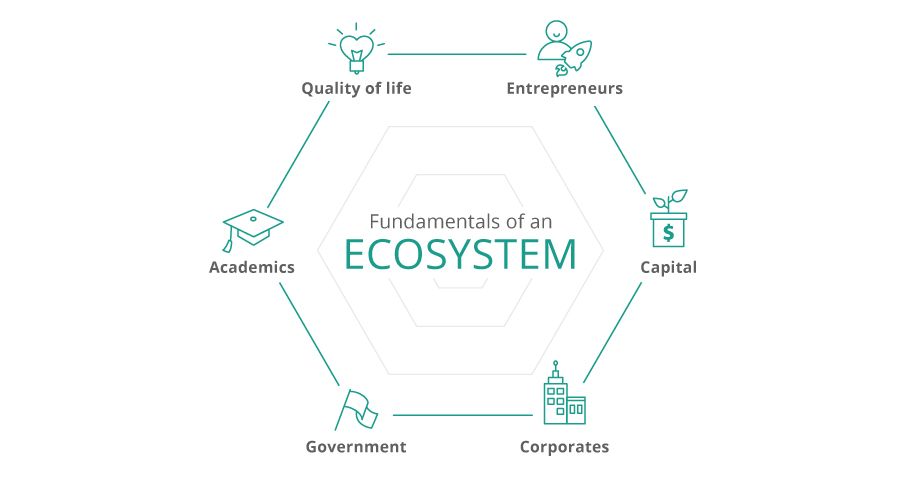 This is where Dubai in particular has excelled, attracting global and regional talent, providing a tax-free lifestyle, security and robust physical and telecoms infrastructure. It has, more so than any hub in the region, managed to draw global corporations to set up their regional headquarters, who have provided the experience necessary for budding entrepreneurs.

Other hubs, like Jordan and Egypt have managed to create their own talent pool with strong university programmes and a slew of engineering graduates every year. Yet neither country provides the quality of life that some of the other GCC hubs offer, nor do they have the same access to capital, rendering them the back office for many startups in the region.

Cairo, which is abundant in startups and new ideas, has become a hub for the rest of Egypt, but not the wider Middle East for this very reason.

Saudi Arabia, the market that almost every company wants to access, has the capital and an improved regulatory environment, but its conservative societal laws make it a difficult destination for the expat community and thus the talent pool is lacking in the country.

Bahrain provides an interesting proposition to startups, particularly ones in the financial technology (fintech) sector. It has good infrastructure, a competitive telecoms environment and a regulatory environment that is very encouraging of entrepreneurship. But it is a late starter compared to Dubai, its talent pool is small and ecosystems and hubs take time to grow, they don’t appear overnight just because the government wants it to.

Where Bahrain can succeed is if it positions itself as a hub for Saudi Arabia. Around the world such examples like this exist, Hong Kong is a hub for China and Singapore is a hub for Asia.

A hub is essentially an aggregator of companies, talent and capital. It requires a robust governmental and regulatory environment to support all aspects of this and the region’s hubs would do well to work more closely together to offer entrepreneurs different characteristics and focus and a more collaborative environment to ensure easier access to the region’s markets.