While there are many benefits to running a business from the UAE such as zero income tax, world-class broadband and a multilingual workforce, these attractions count for little if a prospective company cannot afford to get started.

“The biggest difficulty is money. It’s extremely expensive. To start a company in the UAE is the same whether you’re IBM, Amazon or a startup. Compare that to the US where you can get a trademark online for $200 and you can start a business from your mum's garage,” says Joy Ajlouny, co-founder of Dubai-based delivery app Fetchr, which has raised $52 million in funding according to Crunchbase.

The World Bank’s Ease of Doing Business rankings place the UAE 25th globally for starting a business. To set up an onshore business in Dubai costs a minimum Dh34,340 ($9350), the rankings note, and requires payment of myriad fees. These include Dh15,000 for a general trading licence, plus fees of Dh10,000 to Dubai Municipality, Dh3,000 to the Ministry of Economy and Dh1,200 to Dubai Chamber of Commerce.

There are other expenses such as renting office space – a prerequisite for all free-zone trading licences, which are overall cheaper than offshore licences – and visa fees to hire staff.

“Some young companies need as much as $25,000,” states a 2019 Google-commissioned report co-written by Wamda and OC&C Strategy Consultants. “Business setup and first-year operating costs for tech startups are some of the highest globally, although the low tax nature of the ecosystem means that ongoing costs are lower than in other places.”

PointCheckout is an online payment gateway that enables consumers to use their loyalty points and air miles to buy goods online with participating merchants across the Middle East and North Africa (Mena) region. Founded last year by Bashar Saleh and Tarek Ghobar, the company recently raised $600,000 and has more than 1,000 registered merchants.

“Even though I’m very familiar with the process of setting up a company, it’s still very frustrating,” says Ghobar. “The difficulty comes from the complexity of the requirements, coupled with the application process and the fees you have to pay. The rules and steps are clear, but the process is still overwhelming.”

PointCheckout is a member of in5, a startup incubator in Dubai, through which it could pay reduced fees. It paid Dh14,000 for a trade licence and 12-month hot desk rental, Dh11,000 in visa fees and deposits for the two co-founders, and Dh5,000 in medical insurance, which is another prerequisite to launch. In all, it cost Dh30,000 before PointCheckout began operations, lower than average launch cost of Dh46,255 highlighted in the Google report. 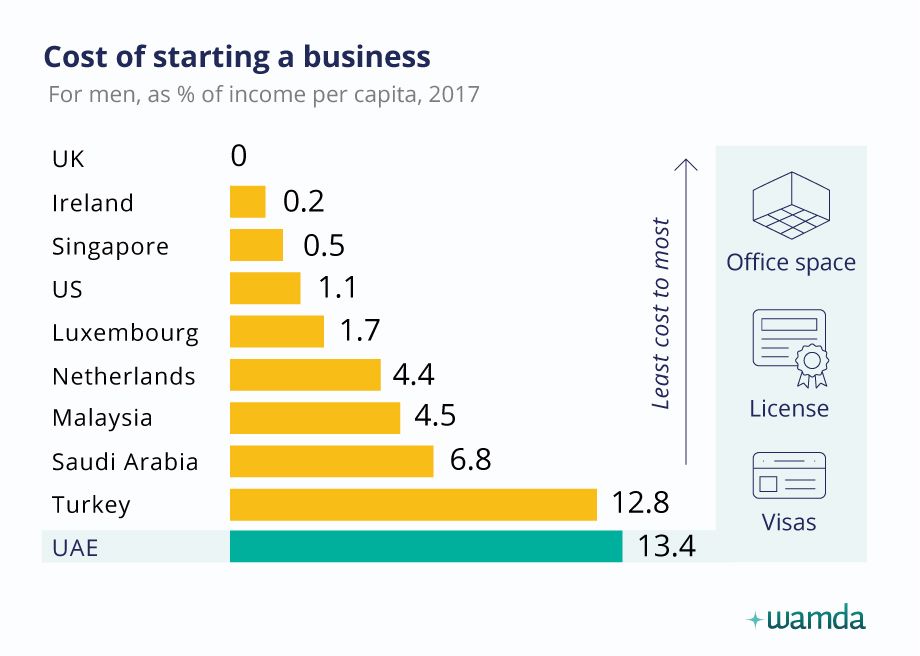 Another inconvenience is that the minimum office space a company must rent depends on the number of employees, regardless of whether those employees will be based in the office. Rent must also be paid one year in advance.

“We were fortunate in that we already secured funding before we formed the company,” says Sudipt Shah, co-founder of Dubai’s Digital of Things, the Middle East’s first user experience lab. “But say you’re starting an e-commerce business from scratch and don’t necessarily need or have outside investors, these startup costs are significant.

If I’m a new graduate in the UAE and I want to set up a business, the costs would be prohibitive. Although a lot is being done and many initiatives are being discussed, the rules as they are today are deterring young entrepreneurs – it’s a missed opportunity.”

Cost is not the only major deterrent for would-be entrepreneurs, with time another significant inhibitor.

“There’s a process you have to follow, and each step is dependent on another. So, you may get your provisional trade licence, but it’s not finalised until you rent your office space,” says Shah.

For Digital of Things, it took six months from wanting to launch the business to starting operations, so Shah continued working full-time until his company was ready.

“Until the rules changed a few weeks ago, ADGM was treating us as if a global financial house was opening a new office – the regulator seemed very sceptical about robo-advisors, so put in some very tough pre-conditions,” said Yacoub Nuseibeh, co-founder of WealthFace, which will launch services before the end of 2019. “While I understand the amount of due diligence that is needed when approving a company (in the UAE), it still takes several months, and you only get in-principal approval.”

The Google report recommends the UAE develop a general-purpose tech innovation licence for startups that are still experimenting to finalise their business model – changing a licence incurs additional costs. It also suggests that fledgling startups be exempted from having to rent office space.

Tech startups require top-quality connectivity, which is abundant in the UAE, but expensive. Mobile broadband costs $22.30 for 500 MB in the UAE, which is about triple the price of the same package in the likes of Britain and China, and four times the price of Ireland and South Korea. Fixed broadband costs are among the highest globally at $55.40. That compares with $16.80 in Turkey, $12.60 in Britain and $33.20 in Singapore.

The UAE’s ban on unlicensed Voice over IP (VoIP) applications such as Skype also creates costs that startups elsewhere do not have to contend with. Meanwhile, a generic .ae domain name costs $44.99, while the same .com domain costs just $0.99.

“The situation in terms of the high cost of starting a business has improved slightly but not dramatically over the past few years, (although) they do want to improve, and they know something needs to be done,” says Fetchr’s Ajlouny. “There's a disconnect between the people who can make the change and the struggling entrepreneurs who understand what needs to be changed, but I have huge faith that we will get there. I just hope it comes sooner.” 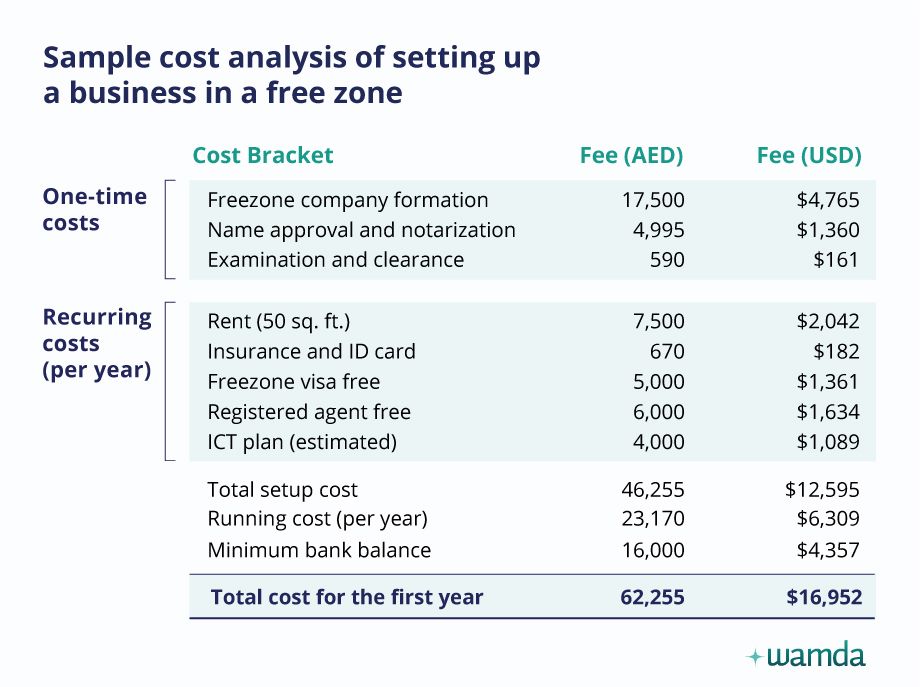 The UAE’s reliance on fee income, rather than taxes, is problematic for startups.

“In the West, startups don’t pay taxes until they begin making a profit, but in the Gulf, you have to pay huge fees upfront whether your business ever makes any money or not,” says Ajlouny. “The cost of doing businesses is painful. The setup fees are crippling, America has 300 million people, so once you set up a business you have a market of that vast size to address. In Dubai you’re paying huge fees just to get access to a market of a couple million, and then you have to pay similar fees or higher to set in other Middle East countries that also have small populations.”

It costs about Dh6,000 in fees to hire an employee, an expense that makes companies more wary of firing underperforming staff due to the added cost of recruiting a replacement.

“You think 50 times before you let somebody go, and for startups, the ethos is to fail fast, but you can’t do that in the UAE,” adds Ajlouny.

Digital of Things’ Shah highlights the difficulties that UAE startups face in managing their cashflow, especially with business-to-business invoices often taking up to 60 days to be paid. In Europe, payment is usually within 14-30 days.

“Cash flow is critical,” he says. “If banks could provide with innovative solutions, like invoice financing or bridge loans that would really help. Right now, you just rely on your clients paying you on time.”