Venture Capital (VC) investments in the third quarter of 2019 have not made as much fanfare compared to the second quarter of this year. The top five disclosed investments amounted to $27 million in Q3 compared to a total of $99.1 million last quarter. For the first time this year, however, the top five deals this quarter were the most diverse in terms of country, with a Saudi Arabia-based startup taking home the biggest VC deal. As ever, e-commerce and transport startups dominated the top deals.

Here are the biggest five VC disclosed investments in the third quarter of 2019 in the Middle East and North Africa (Mena):

Nana Direct, a Saudi Arabia-based online grocery platform, raised $6.6 million in its series A round in August, making it the biggest investment this quarter. The investment was co-led by Middle East Venture Partners (MEVP) and Impact46. Other investors included Watar Partners, Saudi Venture Capital (SVC) Company, and Wamda Capital.

Nana said that it will use the new capital to accelerate its growth plans, onboard new stores, continue to build its team and further develop vendor relations.

MaxAB, an Egypt-based business to business (B2B) e-commerce marketplace, secured seed funding of $6.2 million in September, in one of the largest ever seed rounds raised by an Egyptian startup and the second biggest deal this quarter. The investment was co-led by Beco Capital, 4DX Ventures, and Endure Capital, with participation from 500 Startups, Outlierz Ventures and other local investors.

The startup said that it plans to use this investment to reach 50 per cent of Egypt’s population within the next two years before expanding across different geographies in North Africa.

Washmen, a UAE-based dry cleaning and laundry service raised $6.2 million in a Series B round earlier in July. The round was led by Russia-based AddVenture and was also joined by Germany-based Henkel, Cedar Mundi Ventures and B&Y Partners and UAE’s Clara Ventures.

Washmen said that it will use the investment to solidify its operations in UAE and expand its technology development office in Beirut.

TemTem, an Algeria-based ride-hailing startup, raised $4 million in a Series A round in September. The round was led by Tell Venture Automotive and other undisclosed investors in the largest Series A investment raised by an Algerian startup.

The startup said that it will use the funding to launch new services and boost its growth.

Ecomz, a Lebanon-based e-commerce management platform raised $4 million in a Series A round in July. The round was led by Cedar Mundi Ventures and joined by iSME Lebanon and BLC Bank.

The company said that it plans to use the funding to enhance its platform with artificial intelligence and machine learning capabilities and to expand its reach. 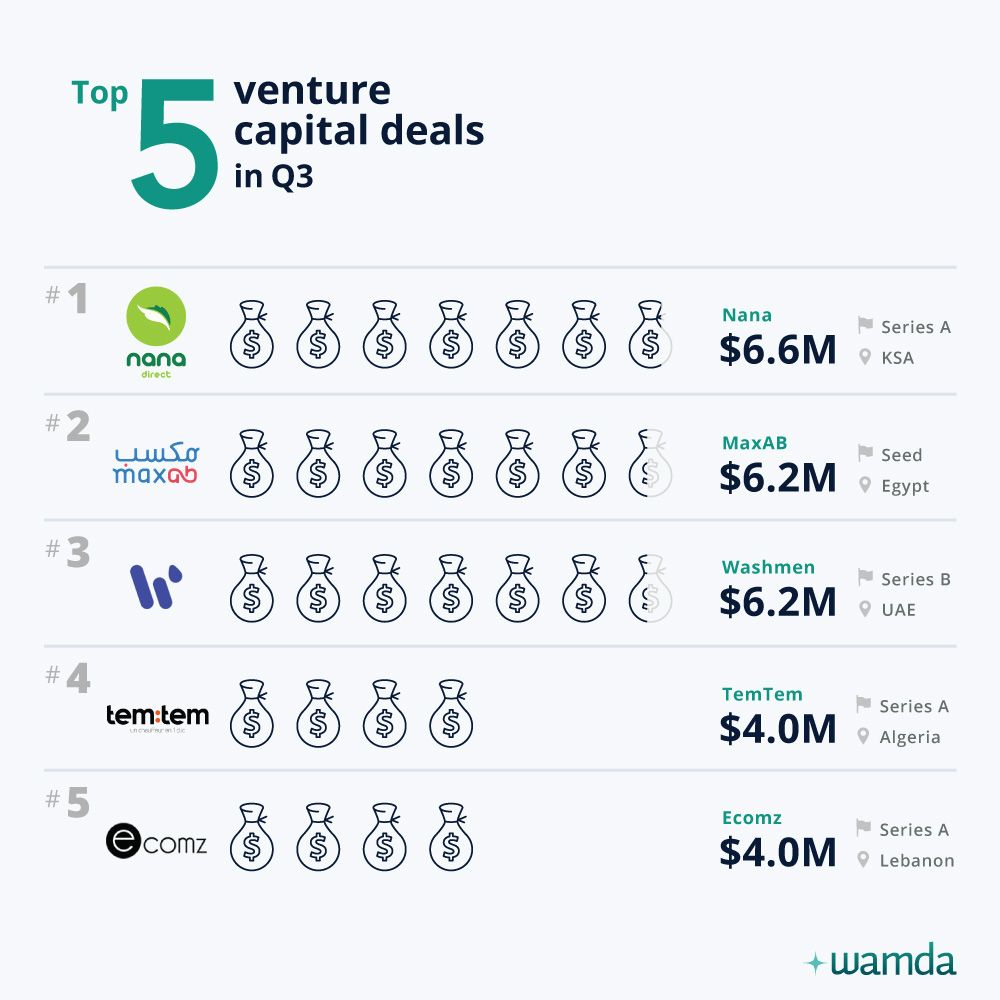