A third of all the food produced for human consumption is wasted every year around the world. That is roughly 1.3 billion tonnes of food according to the Food and Agriculture Organisation (FAO) of the UN, worth an estimated $2.3 trillion – enough to feed the 820 million hungry people four times over. The amount of food lost is so vast, that if food waste were a country, it would be the world’s third biggest source of greenhouse emissions, after the US and China.

Among the biggest food wasters in the world is the GCC, where in Saudi Arabia, the average person wastes 427kg of food, and in the UAE the average person wastes 197kg every year. More broadly, the entire Mena region wastes up to 250 kilograms per capita a year of food. When compared to Europe and the US, where 95kg to 115kg is discarded annually according to the Food for the Future report from E&Y and HSBC, the region’s food waste issue becomes particularly stark.

Now, governments in the Middle East are making a more concerted effort to tackle the issue. Both the UAE and Saudi Arabia have pledged to cut down 50 per cent of their food waste and loss by 2030, aligning their policies with the United Nations’ 12.3 Sustainable Development Goal.

Startups with innovative solutions have emerged across Mena to address local food system inefficiencies across the entire value chain where 32 per cent of food waste occurs at the consumer level, and up to 68 per cent occurs at earlier stages like production, distribution, and retail according to FAO.

From farm to fork

Tackling wastage at the farming stage is Jordan-based Decapolis, which uses data analysis and blockchain to help farmers produce fruit and vegetables compliant with global standards. Farmers in Jordan typically lose a lot of their crops due to high pesticide usage which can sometimes render them non-compliant for export requirements.

“We are working with 100 farmers in Jordan, we give them all the measurements and safety and quality parameters for the entire planting programme, including water, soil and seed,” says Abedalrhman Habashneh, founder of Decapolis. “We use our technology to generate data to decide the best times to plant seeds, to control pesticide and fertiliser usage. This helps to keep their yield positive and compliant with global standards.”

Country regulations, supermarket requirements and customer expectations typically lead to waste after the produce has grown. Fruit and vegetable deemed “imperfect” is wasted, sometimes due to their size or odd shape. There are several startups in the region who, using biotechnology, repurpose these crops to produce fuel or fertiliser, while composting is also becoming popular.

One UAE startup looking to save “ugly”, soon-to-expire and surplus produce is EreoGo, which describes itself as a conscious grocery shopping app.

“Even though our core primary focus is to fight food waste and allow people to buy good food that is about to be thrown away, our focus is also to ensure that people get great information that food which is about to waste doesn't mean bad food, sometimes it just mean that this food doesn’t have a place to land,” says Daniel Solomon, co-founder of EreoGo.

The startup will be operating alongside other last-mile grocery food delivery companies in the UAE like Instashop and Trolly, with a goal to create a “community of conscious consumers who are able to know the impact of their purchases”.

The startup’s strategy to reshape regional perceptions around ugly produce is to offer as transparent of a platform as possible to engage users and encourage their environmental contribution.

“What we’re doing is also allowing users who buy food that is about to expire to have that feel-good element, to be able to have real metrics, to see how they've been able to contribute to solving the green gas emission problem we have in society. How much CO2 has been saved, how much water is saved, how many people have been fed, for the user, this is what we call ‘the sustainability’s call’,” says Solomon.

Reducing emissions, water usage and increasing shelf life has become the focus of many sustainability startups around the world. These startups have also attracted substantial venture capital (VC) investment, one example includes US-based Apeel Sciences, which has raised $390 million for its technology that uses plant derivatives to extend product shelf life.

In Saudi Arabia, food preservation startup Uvera is operating in a similar method by using FDA-approved UV light exposure to extend the shelf life of meat, baked goods, and fresh produce by 20-60 per cent. With an in-house built-in device for food providers to install, and a household device for individual customers, the startup plans to raise a second fundraising round in May this year and officially launch in 2022, although it has already gathered notable traction within both Silicon Valley and Saudi Arabia.

“The market size is literally huge, we are talking more than 5.4 million households and this is only in Saudi Arabia,” says Asrar Damdam, founder and CEO of Uvera who plans to expand her business to other countries in the GCC, starting with its B2C model for all Saudi households.

Consumer and cultural perceptions play a critical role in food waste overall. While public and regulatory strategies across the region are mainly focused on food loss initiatives that tackle produce loss at the farm and supply chain level, sustainable foodtech startups are dedicating their efforts to reimagine more sustainable consumer practices.

Gaining popularity across the Mena region is the segment focusing on redistributing excess or rescued food to achieve a more circular food economy and change consumer habits.

“People still don’t have the awareness about wasting food, it’s not common. There are still more than 30 per cent of people below the poverty line [in Egypt]”, says Menna Shahin, co-founder of TeKeya. “But we are so generous, we like to cook a lot, and serve. We’re so generous with food.”

Founded in 2019, TeKeya is a social enterprise that offers restaurants two options for the redistribution of their surplus food.

“If you are a food provider you can sell your imperfect, untouched, healthy food on our application for a 50 per cent discount to people,” says Shahin. “We also have the subscription model because sometimes restaurants want to donate their food instead of selling it. Through our application, we check which charities need this food and we provide it.”

The startup claims to have increased the customer base and profits of the 65 restaurants it has partnered with in Egypt and is now talking with investors to acquire its first funding by the end of this year to assist its expansion into the UAE and other countries in the GCC.

Citing the success of global foodtech startups like  Sweden-based Karma food app, which raised a total funding of $16.7 million, and UK-based Olio app, which raised a total of $10.1 million in funding, Shahin is confident in being the “first movers” in Egypt and the Mena region and aims to “cover all food waste elements in the food value chain”, including industrial and water waste.

“Being sustainable and more circular in your business practices actually makes money,” says Greg Ohannessian, founding partner at SOMA MATER, a UAE-based food security consultancy. “When we are talking about food waste specifically, for every dirham that a restaurant spends on cutting or reducing their food waste, every dirham on just trying to reduce their food waste, they get Dh7 back. That’s a global number, the return-on-investment (ROI) is immense.”

Despite the high returns, raising investment as a food waste startup in Mena is not easy.

“The first challenge is how you can be a sustainable business while you make profit and have traction. There are many ideas but making a sustainable idea a profitable idea is not easy to do,” says Shahin.

For EroeGo, which is looking to raise a pre-Seed round, there is still a sense of hesitancy towards sustainability-focused startups among regional investors.

“Everybody understands fintech, they understand a marketplace where if you buy X you pay X and it's something very comfortable. When you talk about sustainability, or sustainability funds, we don’t have a lot of ventures in the region who are really looking at this actively. They’re just like the consumers: they would want to do it, they want to be involved, but I think the market is really early,” says Solomon. “We want to make food waste a profitable marketplace that fights for sustainability.”

In the less developed startup ecosystems of the region, the challenges are further pronounced.

For Foodeals, operating in Morocco where the local ecosystem is still in its earlier stages, local VCs are limited in number and appetite, which forms an additional challenge for various startups in the Northwest African region.

“In Morocco we don't have a mature ecosystem like in Saudi Arabia or Qatar or Egypt. We don't have many VCs or government or private initiatives, it's really limited,” says Yassine Bentaleb, founder and CEO of Foodeals.

“Developing our B2B is really hard because we have to sensibilise more people on the impact of this problem. In places like France, as with the case with Phenix, food professionals give food and then governments give them back some credit or compensation. In the Mena region or Morocco or Africa, we don’t have subsidies from the government. This way the food brands don’t have the motivation to give,” says Bentaleb, citing the Paris-based Phenix food-waste platform that raised a total amount of €15 million ($17.9 million) since its launch in 2015.

Opportunities for sustainable startups in the region are growing and relying on local farming as well as food waste is a strong business model for these startups. But as both Ohannessian and Solomon highlight, and as Bentaleb came to face, effective steps to fight food waste require heavier partnerships between foodtech businesses, regulatory authorities, and every participant in the food supply chain.

“When you look at the size of the issue, it doesn’t need one market leader, it needs a lot of people coming together from production to farming. I think businesses are starting to understand that they can do more with each other than against each other,” says Solomon. “When you have such a big mandate and such a big problem to solve… you want more companies to partner with each other to be able to solve this issue.” 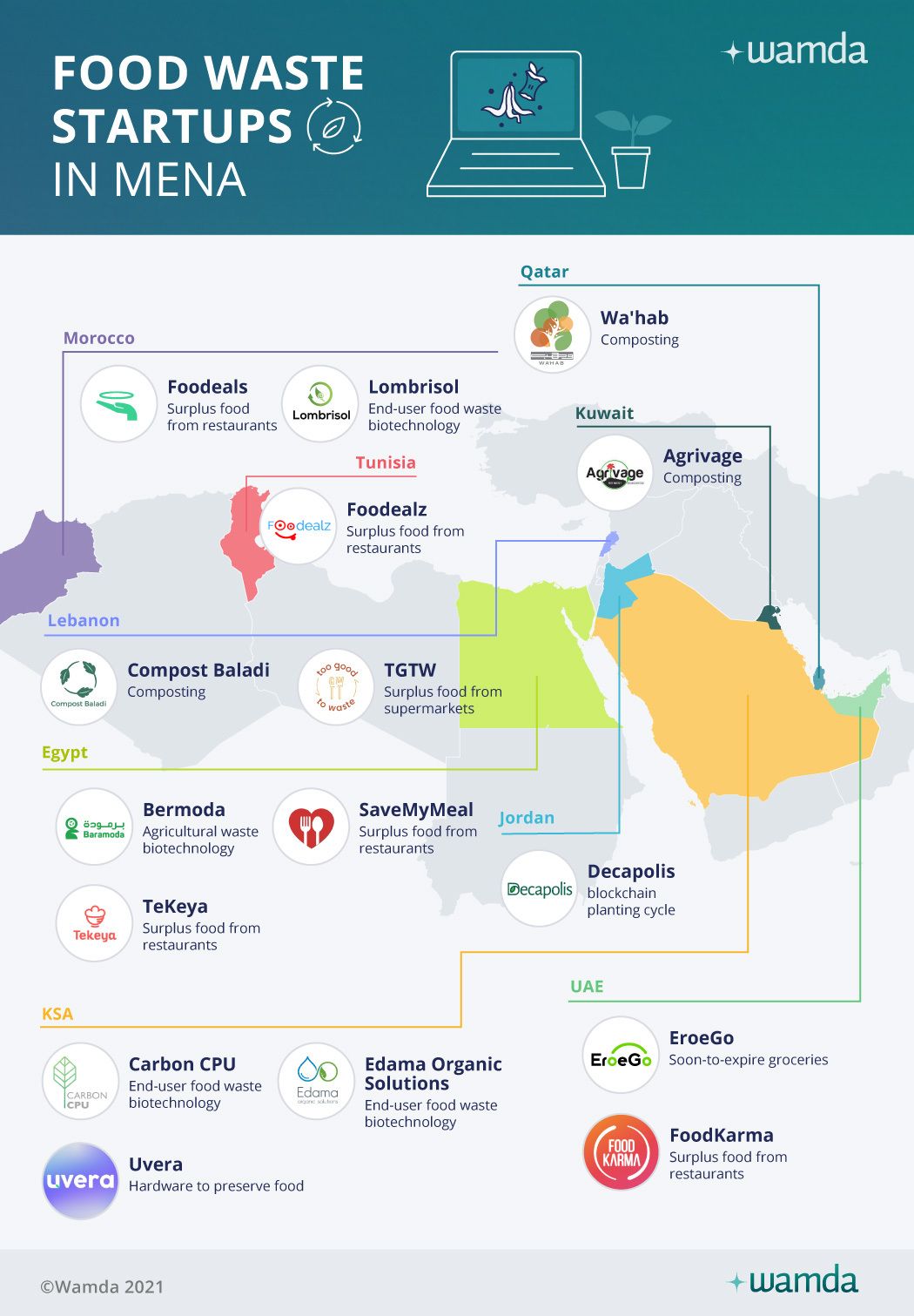