It was during one of his evening jogs that Kamal Al-Samarrai wondered why he found himself in a position of financial difficulty. At the time, he was working on a recruitment startup that was quickly perishing during the pandemic and he was worried about his next paycheck. It dawned on him that his financial woes were rooted in his childhood and his lack of financial literacy and grounding.

“I have worked at banks, I have had my own businesses for many years, why was it when Covid came about, I was worried about where my next paycheck would come from?” he says. “I laid that back to my childhood. When I was younger I had my credit cards and bought my first car with the credit card and then I got another credit card to pay off the first, then I got a loan, not realising anything about interest rates, APR rates and what the asset depreciation was on the car.”

Al-Samarrai racked up a debt of GBP22,000 and with no job, he had no way of paying it off and was forced to turn to his parents to help him out of his situation. Inspired by this lesson and wanting to give his young daughter a better footing, he began to look at financial literacy for children.

He connected with former Wamda partnerships director Omar Al Sharif, who at the time was considering his next career move, to discuss his idea for a financial literacy app for children. Al Sharif had had a similar conversation with Dina Shoman, who had previously launched Nahji in Jordan, providing financial literacy programmes and content for games and apps for children. And so Al Sharif brought his two co-founders together and the trio developed Verity, a financial banking and literacy app for children and teenagers aged eight to 18. Its mission - to teach them how to earn, save, give and spend responsibly.

“People don’t realise it’s [financial literacy] a basic life skill, it’s not all maths,” says Shoman. “We live in an instant gratification world with marketing all around us, that doesn’t help when children or even adults are trying to make financial decisions.”

The Organisation for Economic Co-operation and Development (OECD) defines financial literacy or financial capability as a combination of awareness, knowledge, skill, attitude, and behaviour necessary to manage financial resources effectively, as well as the ability to make sound financial decisions for a lifetime of financial wellbeing.

“We are teaching the difference between wants and needs. Every purchase we make, having that [thought] in the back of your head - if this is a need or a want - for a child would make such a difference,” says Al Sharif.

The team researched the key problems facing children in the region and found that about two thirds of the regional population are financially illiterate.

“In this part of the world, nothing is built for kids, everything like the digital wallets, is for [those aged] 18 and above,” says Al-Samarrai. “Parents don’t know how to teach their children about financial literacy and the final problem is cash.”

The Arab Youth Survey 2021 found that 37 per cent of Arab youth say they usually struggle to meet their expenses in full, while 42 per cent can meet their expenses but are unable to save. Nearly three-quarters of respondents overall admit to worrying about personal debt and with rising living costs, this worry will likely grow. The survey also found that a third of Arab youth are currently in debt.

Verity’s app, which is now available to download, incorporates education and money management solutions, while allowing parents to control the overall family account. Parents can top up their digital wallets directly from their bank accounts and then allocate a set amount to each user in the family through pre-scheduled monthly or weekly allowance or through one-off transfers. Children also have the option to ‘earn’ money by completing chores and tasks set by their parents. Once they have received their funds, the children are prompted to decide how much they would like to contribute to personal or family savings goals, causes or charitable initiatives, or their spending budget. 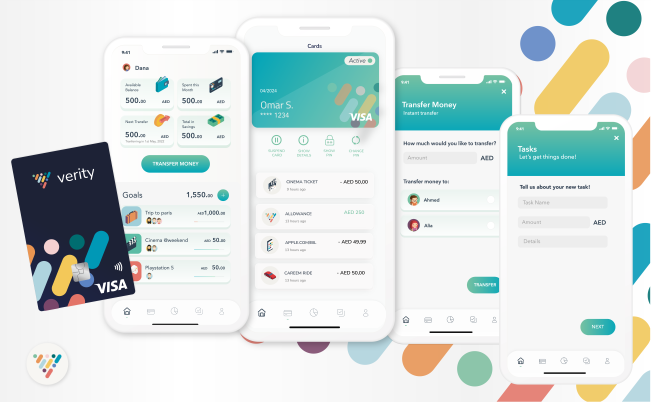 The fintech has also partnered with Visa and UAE-based banking-as-a-service (BaaS) provider, NymCard, to facilitate the digital banking experience and issue personalised debit cards that are fully integrated into the app to allow children to make purchases online and in store within parameters set by their parents.

“We are trying to reduce the anxiety of opening a bank account,” says Al Sharif. “Children learn these financial traits early on by the age of seven. Once they learn those traits, they become better at managing money and savings. A lot of adults fail to pay their bills, learn about savings, earning and valuing money. A lot of children don’t have allowances so they get money when they need, and that doesn’t prepare them for the job market.”

Verity is not alone in its mission to teach children how to manage their finances. Over the past couple of years, several players have emerged in the UAE including Edfundo, Savii, Zywa, Amwali and neobank YAP, which recently launched its own children-focused app. Many have been inspired by the likes of UK-based GoHenry, which raised $66 million, reported revenues of $42 million in 2021 and has a customer base of over two million across the UK and US.

Competition is expected to grow regionally, once more financial regulators become comfortable with introducing open banking regulations. Saudi Arabia has been working on its own open banking policy framework, which once introduced will mark a significant shift in the region’s market.

“Saudi will become more agile and there will be a shift to the country. The biggest two markets every fintech is eyeing is Saudi and Egypt. The UAE is looked at as very progressive in terms of regulatory framework, but Saudi is catching up,” says Al Sharif.

To date, Verity has raised $1.2 million from regional and global investors, among them Wamda Capital. Its recent bridge round will be used to develop new app features and facilitate customer acquisition activities, while also fueling the company’s expansion into new markets across the Mena region.