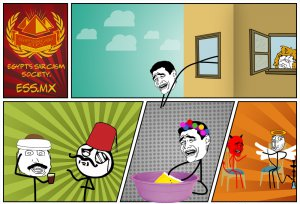 Egyptians are known for their sense of humor, often using sarcasm and irony to describe and get through tough situations. But what if someone could turn this humor into a profitable business?

Egypt's Sarcasm Society (ESS) is an online community built to create sarcastic and humorous social comics. Started in 2009 as a closed group on Facebook, with a few thousand members, the original project was restricted to users under the age of 25, who were mostly students in the upper class, fluent in English and using the “Franco-Arab” alphabet (writing Arabic with English characters).

Since creating the original group, the content boomed following the Egyptian revolution in January 2011, prompting the group to create a public page resembling a forum crowdsourcing humorous content, cartoons, and illustrations from the community. As users continued satirizing the events unfolding in Egypt, the page reached nearly 80,000 fans by late 2011.

“After the revolution all the satire focused on politics, which helped to spread a sense of sarcastic humor among the people, who continued to share it,” says 17 year old Rami Omar, Business Development Administrator and high school student. With the expansion of its audience, and its inclusion of more than just the upper class, one of the team members created the “Asa7be” character in March 2012 to better appeal to the new audience, which quickly went viral among Egypt’s internet users.

With huge popularity and tens of thousands of fans joining the page, the founders started thinking about monetizing the page and decided to participate in the StartUp Cup competition.

Through the competition, they received offers for potential investment and incubation, prompting the launch of their website in May 2012, reaching half a million page views per day. Today, there are 70,000 registered users on the website who have contributed with more than 112,000 sarcastic illustrations or photos.

Kareem Sami, a final-year medical student in Ain Shams Faculty of Medicine registered ESS as a joint stock company under the name of “Sarcastech” with no outside investment, depending solely on the funds of the eight partners, all in their twenties. At this point they don’t feel ready for investment: “As new business founders we don’t feel that we have enough experience yet to ask for investment,” says Omar honestly. “We want to build the platform and our experience before seeking outside funding.”

“The Business Model we chose is based on ads,” says Sami noting their large user base; they have already planned two creative ad campaigns that involve audience interaction to recover their costs and start making profits. This year, the company plans to expand and replicate its model in the region, starting with the UAE.

Sami explained that the company is also working on a simple tool that allows users to build comics, making it easier for them to create humorous content to engage with a larger audience. Soon they also plan to produce video material as well.

The ESS team is concerned about the lack of respect for property rights in Egypt, which has resulted in the theft of several comic figures and their attribution to other groups who gained fame through their work. It’s a challenge to secure their content, which is completely public and created by the community, while still trying to craft their business model and keep content exclusively theirs.

But it’s a challenge they have to overcome and perhaps, with some ingenuity and mentorship, the young team can find a way to turn a sarcastic community into a sustainable business.