After visiting their offices, I was surprised that Lebanese app company apps2you never made it big in the media. Powered by MT2 and launched in 2010, the company has built apps for Alfa, a local telecom operator, news portal Al Jazeera, the Lebanese Ministry of Health, and many other local restaurants and services, while managing to stay out of the public eye.

However, it started becoming more visible after it released an application for the Lebanese Armed Forces 10 days ago. The app, called LAF Shield, is the only official application that the Lebanese army has released. Given the current security situation in Lebanon, the army deemed it necessary to have an app that allows users to report any suspicious activity or potential crime that citizens might suspect, or so the reasoning goes. 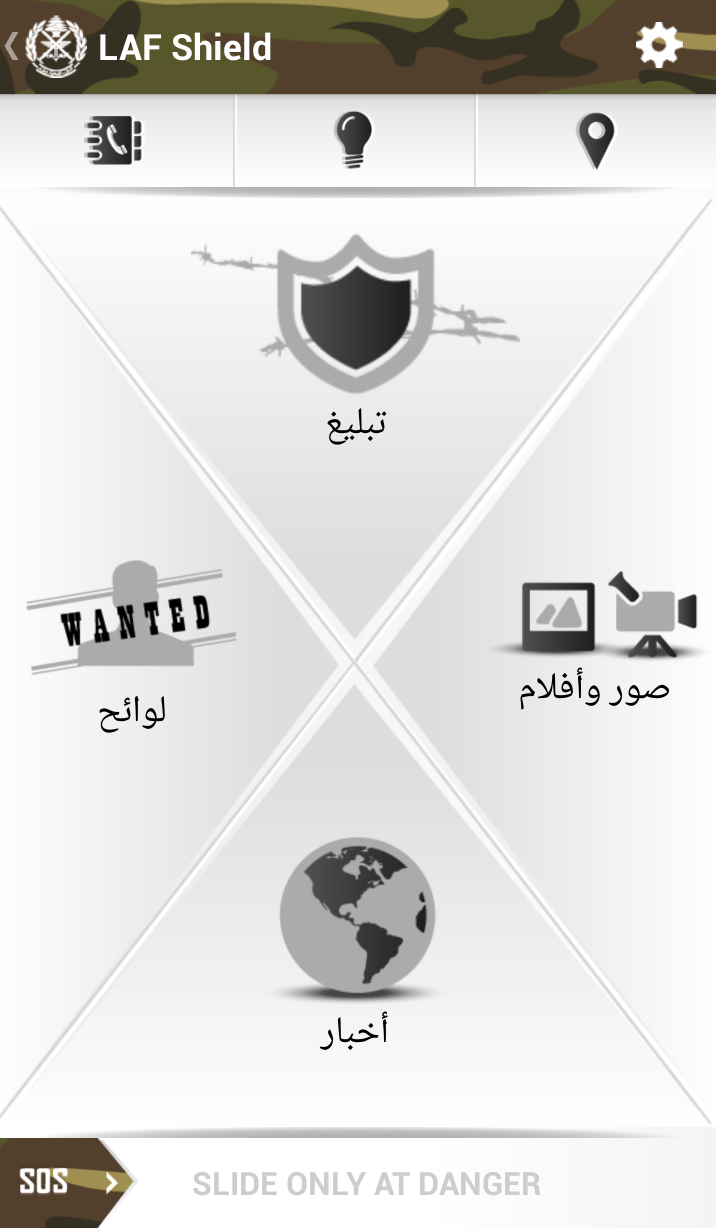 The all-Arabic app is very simple to use, once you enter your name and phone number on its opening screen. This unlocks the home page, which features four main categories: Reporting, Pictures & Videos, News and the public Wanted List (which, users will note, is completely empty thus far).

At the top of the page, the app offers three buttons: emergency numbers, a flashlight, and a map. The map, which is not yet complete, is supposed to reveal areas of security concern in Lebanon. The flashlight is for “gamification purposes,” say Mario Hachem, the Managing Partner at apps2you.

At the bottom of the page, you have an SOS button that should only be swiped in case of emergencies to direct you to the LAF hotline. If the SOS button is swiped by accident, the following Arabic message will appear on the screen: “Do not make this call unless it is extremely urgent. Any abuse will lead to a prosecution.”

The primary function of the app is Reporting, which offers various situations to choose from: suspicious vehicle, suspicious object, armed robbery, fight, robbery, breach of limits, fire, drug use and other incidents. Once you choose a category, the app asks you to take a picture or describe the situation before submitting your report. The app tracks your location via GPS and sends your report directly to the army's IT team.

“The army has dedicated a huge team to work on the app’s reports,” says Hachem. He also emphasized the fact that all content and updated news in the app are provided solely by the Lebanese Armed Forces, not apps2you.

The app may seem like it's been released in response to a few recent explosions in Lebanon, but apps2you began working on it four to five months ago, putting it through a long process of approvals and testing. The actual development took six weeks, resulting in a user interface (UI) that's very intuitive and somewhat cute. Since its launch, the app has seen more than 10,000 downloads on Android.

Should you worry about your security? 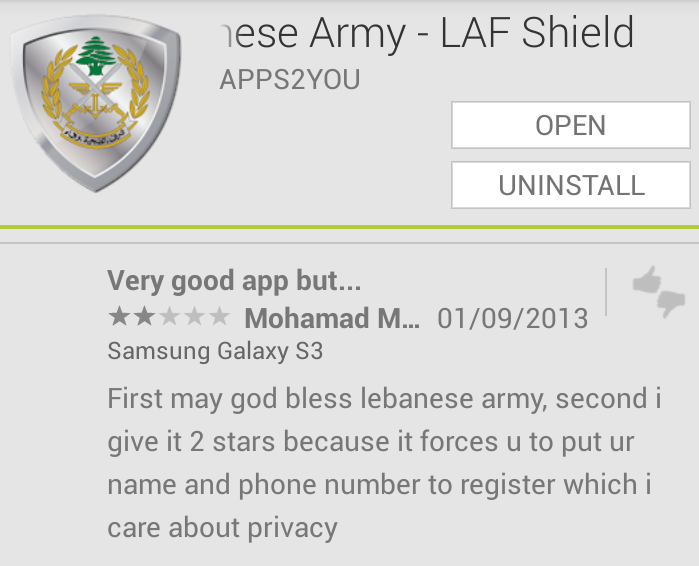 Since the launch of the app, there's been general buzz in Beirut about security concerns; many don't like the fact that the app demands a name and phone number before you can use it. Others have simply been  too scared to send reports to the Lebanese Armed Forces. Comments in the Google Play store revealed some concerns, so we asked apps2you, should users really worry about security?

Unclear. On the one hand, the LAF already likely has your information; if they wanted to hack or tap your phone, they might already be able to. Users also don’t need to put their correct number or name to use the app.

“Did you get an SMS confirmation when you entered your phone number?”, Hachem asked me during our interview. No you didn’t, he pointed out, because the army doesn’t care whether the number you entered is correct or not; what matters to them is receiving reports from citizens. It also allows you to disable notifications and edit your username and phone number.

The reason for building in a registration form that allows for misinformation is unclear; the apps2you team claims that it's both a remnant of a standard mobile app strucutre (not a particularly convincing argument) and an attempt at marketing. "The army is interested in gathering users’ phone numbers because they want to start a channel of communication with them," says Hachem.

When it comes to security, it's more likely that the army is more interested and more able to track dangerous incidents than to track the motions of all of its citizens; however, without more information, it's difficult to understand the actual intentions behind the app. Having your location tracked- if the army has the ability to connect identifying information to a GPS location- could still pose a risk.

Why not a hotline or an SMS service?

The app also begs the question: why the Lebanese army launch a smartphone app, as opposed to telling citizens to call the Ministry of National Defense hotline (1701) to report a suspicious activity, which is likely faster than installing an app, signing up, taking a picture and submitting it? Other countries have stuck to reporting over phonelines; one example is the U.S. campaign, "If you see something, say something”, which encourages citizens to report unusual behavior to a local number.

The app will help LAF know your exact location, Hachem answers, arguing that a picture is more accurate than an oral or written description. Yet, again, if you don't provide your name, the idea is that your reporting will be anonymous.

Personally, I liked the idea behind the LAF app and didn't find it invasive; it also could help citizens feel engaged and responsible in a time when there are few other methods for feeling in control of one's own security. The app might improve, however by making push notifications optional.

Crowdsourcing reporting on dangerous circumstances may only be a small part of the app's true intention, howvever. The Lebanese Army may be looking to boost its own profile, Mohamed ElDahshan argues on Foreign Policy: Transitions. The app development team confirms this; LAF Sheild is not just for protecting citizens from dangers; it's also for building a channel between citizens and the Lebanese Army.

When you see members of the army on the streets daily, how often do you strike up a conversation with them?, Hachem reasons. With this app, the army will add 4 million people to its family, he says.