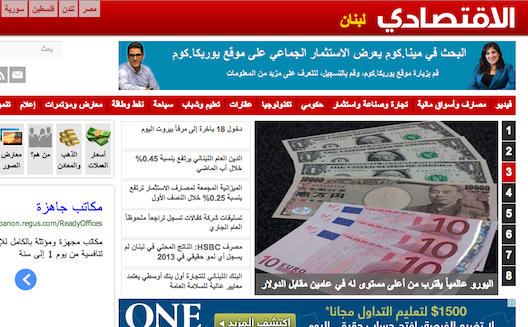 Aliqtisadi, the business magazine based in Damascus, Syria, announced its launch in Palestine and London last week, at the Abu Dhabi Media Summit.

The first private business magazine to launch in Syria, in 2004, Aliqtisadi went online in 2008. It has survived the crisis in Syria in part by relocating its management to Abu Dhabi this January, and venturing into new markets, opening sites in Lebanon last June, the UAE last December, Egypt in February, and Saudi Arabia this March, although the bulk of its readers are still in Syria.

At Aliqtisadi Palestine (@Aliqtisadi_PS), the goal is to cater to an underserved market, where the publication can bring its reputation for trusted, neutral, investigative reporting to a market in which business leaders and entrepreneurs are building a new ecosystem. Part of the team’s agenda- as it is in all markets- will be to report on inspiring new economic initiatives.

From London, Arabic-only Aliqtisadi (@Aliqtisadi_UK) will target the 300,000 to 400,000 Arabic speakers in the UK market. “It’s a smaller market, but our proposition is unique,” founder Abdulsalam Haykal told Wamda, hinting that broader expansions were coming. “If it works, we’ll go to other western markets.” This is a six to 12-month test period, he explained, noting that the publication’s positioning in London is also designed to attract advertisers. “It we demonstrate to advertisers [in the Middle East] that we are able to reach this population, it will give us a unique position and will increase yield.”

Despite hosting its core team in a very polarized media environment, Aliqtisadi's mandate remains focused on highlighting facts and resisting any political partisanship. "[Our vision] is about job creation, wealth creation, and stories of inspiration,” says Haykal. “This is what people want, after the Arab Spring. They want to be able to create wealth for themselves and their communities.”