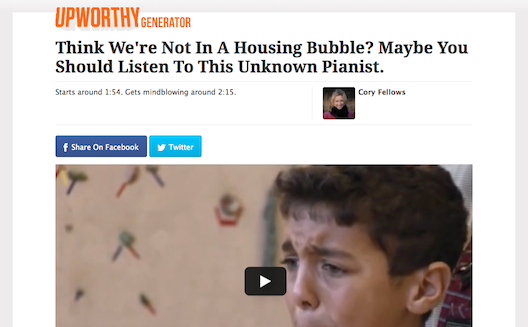 How many times in the past month have you clicked on a BuzzFeed list or an Upworthy headline promising to make you feel amazed and/or outraged?

If you're like most of us, you've succumbed (at least) a few times. By this point, content creators know, at least in theory, how to write clickable content. Based on a recent interview with University of Pennsylvania marketing professor Jonah Berger for The New Yorker, Maria Konnikova has isolated several key qualities every viral story has (some of which should come as no surprise to those who read the internet, not to mention to those who write it). They are:

Sites like BuzzFeed and Upworthy, ranked #1 and #3 respectively in this December 2013 list of sites with the most-shared stories on Facebook, owe their relatively sudden popularity to the fact that their editorial teams have isolated these qualities of a clickable story, now proven by science. 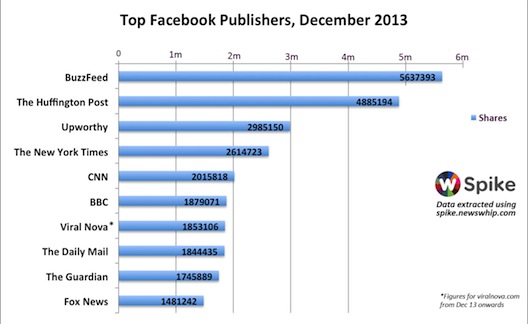 But will this algorithm break? Or get worn out? In other words, if every content creator on the internet publishes an article called ‘5 reasons this video will make you cry,’ will anyone click on any of them? Even if people get wise to the fact that their emotions are being manipulated, will they care?

The backlash against Upworthy, in particular, has begun in earnest. The site, launched less than two years ago with backing from Facebook co-founder turned New Republic impresario Chris Hughes, has an ‘about’ section that is filled with earnest-bordering-on-cheesy sentiment (“social media with a mission,” “things that matter,” “check out our mission statement… which features an adorable kitten” etc.) that, along with headlines transparently engineered for maximum clicks, have proved rather easy to make fun of. The backlash ranges from parody (such as an Upworthy Generator site that instantly creates Upworthy-style headlines) to mockery (in The New Yorker’s Shouts & Murmurs section) to, of course, hashtags (comedian Kyle Ayers recently tweeted “This man just finished his third bowl of Corn Pops for dinner. He then reached for the box again. What happens next will shock you #upworthy”).

In the Middle East, Rama Chakaki has founded and runs the Dubai-based site Baraka Bits with a similar mission to Upworthy: reporting stories that will make people both feel good and want to change the world for the better. But Baraka Bits’ ‘good news’ content – one article currently on its homepage carries the headline ‘9 reasons for #GoodNews from the #MiddleEast’ accompanied by a picture of two adorable kids – is made all the more unique by the dominant narratives regarding the Middle East that have been ubiquitous in media for the past decade or so.

But rather than using “shock value” to get attention for its content, Chakaki says, Baraka Bits prioritizes fostering a community based on productive change rather than aiming solely for shares and clicks. She’s even willing to sacrifice page views to appeal to the type of readers who are “genuine, engaged, asking follow up questions, and clicking through to the cause we’re writing about,” even if articles are only garnering 300 views. “It’s a long-term investment,” she says. “We want to avoid people being surprised when they read an article that doesn’t match the headline.”

Of course, in the content game, page views are and will remain one of the primary ways success is measured. This does not exclude Baraka Bits; for the coming year, increasing traffic is one of Chakaki’s main goals. But gradual growth, and cultivating trust in people who will become long-term Baraka Bits consumers, is a better indicator of success for Chakaki than a meteoric traffic increase that might not last.

So how do content sites walk the line between immediately gratifying, possibly exploitative headlines and maintaining long-term credibility and traffic? The truly successful sites, in terms of reputation, impact, and profit, will need to do a little bit of both.

In the long-term, Upworthy sees this headline hacking as a temporary means to a noble end. By its own admission, not only does their editorial team “care about headlines a lot,” according to a blog post written last month, but the team feels that “‘clickbait’ – overselling content with outrageous headlines in order to get people onto a website – is a totally viable (if totally annoying) way to get a bunch of initial views.” Also, as noted in a New York Times article by David Carr about the site’s first 100 days, the editorial team operates along the same lines as satirical news site The Onion, coming up with dozens of headlines and narrowing down the stories based on what might garner hits.

The upshot of all this (for lack of a better term) research is that content startups can learn what virality will and won't gain them. But in order to maximize this impact, they will need to apply it to congrete goals. When it comes to profit, heavy traffic can bring in more money, but reaching a niche audience and building trust can support better sponsorship and partnerships.

No one yet has hit the sweet spot between the clickable headlines and high quality, positive content. If Chakaki and her team attain this goal, as she says she intends to do over the next few years, Baraka Bits might pave the way for a feel-good media model that does more than just tops a chart of Facebook shares.