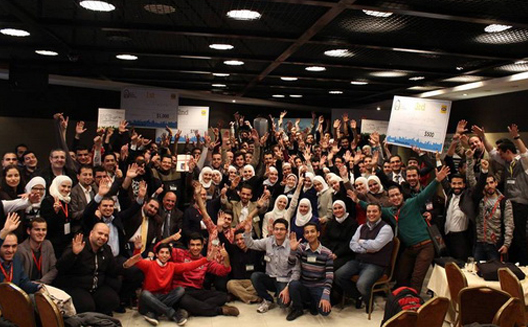 At long last, Startup Weekend, the global entrepreneurial competition, has found its way to Damascus, in spite of the three-year war that has ravaged the country and scattered its population. Last week, more than 125 Syrian entrepreneurs gathered together for three days to work on developing their startups in Damascus’ Technology Garden.

On the first day, entrepreneurs pitched around 40 ideas. Some were traditional, like an idea to develop e-stores to connect factories with customers, or one to build a new gaming app. Other ideas involved providing solutions to problems and challenges caused by the current war in Syria, such as an app to help deal with mobility problems within the city, or an app to get in touch with NGOs that help refugees.

Attendees voted for 19 ideas, then the teams formed and the work began. Many mentors were present to support the teams and give them advice, in addition to sharing their experiences. Others couldn’t make it to Damascus and provided insight via the internet.

Hani Tarabichi, one of the business and marketing mentors, praised the importance of this event, especially the teamwork aspect, saying that “this event is important because it gathers minds under one roof where they can learn, develop, and achieve.“

On the third day, teams pitched their projects to the jury and the following three projects won:

1. T3D Maker won the first prize. The team built the first 3D printer in Syria with very simple tools and accessories in only three days.

2. The second prize was for Pharmgram, a mobile app which helps users get to the nearest pharmacy.

3. Daraty is a game that combines between fun and learning, won the third prize.

One of the event sponsors, Al Badia Cement, surprised the participants during the last day by announcing two additional prizes that reflected the company’s goals of social responsibility. The awards went to:

Regarding the challenges, one of the organizers, Ahmad Sufian Bayram, told us that the “lack of space and problems with the internet connection didn’t make it easy for the teams and reflected the difficult circumstances in Syria. Overcoming these issues is the main purpose of this event.”

al-Amjad Tawfiq Isstaif, one of the organizers and the main coordinator of Wikilogia (a platform for Syrian youth to coordinate on entrepreneurial projects, and a partner of Startup Weekend) revealed to Wamda that the community organization is planning for further upcoming events to support the winning entrepreneurs in developing their projects.

At the end, One of the judges and mentors told the group that Syria is like “a tree that lost a lot of its leaves. But this event witnessed the birth of new green ones reflecting the future of this country.”