Amidst the economic crises and political tensions from which the countries in the region are currently suffering, unemployment rates have risen, particularly in Egypt, home to the highest rate of global and local company’ shut downs.

But despite this, Egypt is where Elance, an American multinational company, decided to remove geographical barriers for job seekers in Egypt as well as to create a direct communication channel between prospective employees and companies looking to hire from around the world.

Ever since launching in California in 1999, Elance has scaled to serve 75 countries around the world. The website has more than 3 million subscribers and 800,000 hiring companies of various nationalities which have, since launch, transferred more than 995 million dollars to freelancers working through the Elance platform.

During an Elance event at a hotel in Cairo, Heba Allam, Elance’s representative in Egypt, reported figures representing the company’s success. “The company scaled in Egypt after it saw a pressing need for freelance services. Egypt managed last year to progress in the ranking of Elance services’ biggest beneficiaries, [moving to 18th place] with more than 20,000 subscribed Egyptian users, [a number that has increased] by 31% [since] 2012,” she said.

The website has brought $2,600,000 USD for Egyptian subscribers since 2006. “The service contributes efficiently in solving economic issues, such as the inflow of foreign currency to the country, and other unemployment-related social issues,” Allam continued.

Allam, an Egyptian herself, confirms that a country such as Egypt, with a population of 88 million people, should have a much bigger number of subscribers. “We are hoping to reach at least one million subscribers in 2014. Our country is packed with talent and it is one of the biggest Arab countries in terms of internet users. Thus, we have high hopes for it in the coming phase,” she adds.

Elance’s vision is to see one employee out of three working as a freelancer by the year 2020. The website is counting on social media marketing campaigns to spread the word at a broader level, especially in Egypt and the Arab world, where it is still necessary to raise awareness on the benefits of freelancing. 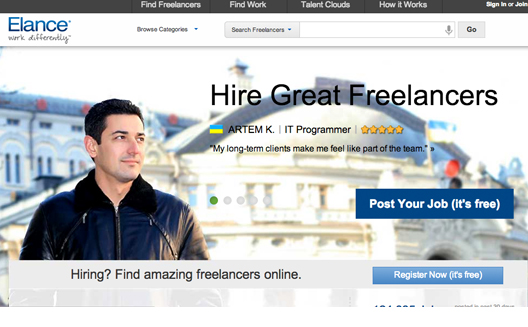 Elance is not the only online freelancing platform in Egypt and the Middle East; it competes with a range of freelancing websites such as Nabbesh, Jobzella and Laimoon. Nabbesh is a direct competitor, targeting the free professions sector and allowing freelancers to search for jobs based on their skills. Since its launching back in April 2012 and until now, its user database has grown to over 37,000, with more than 1,300 projects posted on the website.

The website works on a bidding basis: applicants apply to a vacancy post and mention their hourly rates. The employer then chooses the best among the candidates.

Elance earns its profits by adding an 8.75% fee to the hourly rate that the freelancer quotes. The service is free for job seekers.

After the freelancer completes their task, the employer posts a public evaluation of their performance, allowing outstanding freelancers to raise their rate, given the public record of endorsements that reflect their competence.

The subscription process might take some time on the website, but it is not complicated at all. All the user needs to do is to sign up using their LinkedIn or Facebook account, or fill an application form. Then, they upload their resume and photo. Afterwards, they go through an identity verification procedure, accept the website’s terms and conditions, to become then eligible to apply for the convenient job.

There are four available ways for the freelancer to secure payment, including wire transfer, PayPal (which is expected to be available in Egypt within a year), Money Bookers, and Payoneer, which are all platforms that offer online payments.

Egyptian Andrew Osama graduated as an Electronic Programmer from Cambridge in 2005. He realized that working in this field for a single company for years would limit his expertise to just one field. So he decided to work as a freelancer on Elance, which he hoped would grant him diversified expertise in various fields, sometimes as an application developer and sometimes as a website developer, he stated.

Osama recommends beginners not to raise their hourly rate at first and to go through this experience at an early stage: “I recommend young graduates and students seeking to acquire expertise before stepping into the professional world to start working from now and to set a modest hourly rate in order to have an advantage over others. In time, clients’ evaluations will allow them to raise their rate, especially after they have acquired some expertise.”

Will the website’s projections for success make it easier for young Egyptian graduates and full-time employees to overcome their fears of working remotely?