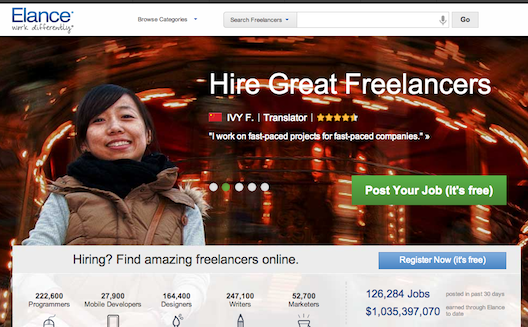 Nearly two years after hiring a Startup Mobilizer based in Cairo, multinational online staffing platform Elance has moved to hire a similar position in Dubai, reflecting a regional increase in qualified job seekers, and the subsequent importance of the region to freelance service providers.

“In 2013,” said Kjetil J. Olsen, Elance’s Vice President International, on a call with Wamda, “we had close to 20,000 job posts coming from clients in the Emirates who hired 50,000 freelancers to do work for them.” There were also 9,100 new client sign ups during this period, “a massive increase” according to Olsen.

“Undoubtedly the Emirates is an extremely important market for us,” he said.

The company is hoping the new hire can execute similar magic in Dubai to what Freelancer Mobilizer Heba Allam has done in Egypt. During an Elance event earlier this year in Cairo, Allam told Wamda that in 2013, Egypt advanced in Elance’s rankings of its biggest beneficiaries, moving to 18th place with more than 200,000 subscribed Egyptian users, a number that has increased by 31% since 2012. Olsen added some statistics to this already impressive list: 2013 saw 24,700 freelancer registrations, 1,300 first-time hired freelancers, and 12,350 jobs awarded.

Elance was so pleased with Allam’s performance last year that they awarded her the prize of best mobilizer – along with a weeklong visit to Silicon Valley.

But Egypt’s positive numbers are perhaps as reflective of the regional market’s excess of qualified job seekers as they are of Allam’s prowess. The rise of job search giant Bayt.com since its founding in 2000 to become one of the region’s biggest internet companies, as well as the relative success of regional job listings sites like Nabbesh, Jobzella, and Laimoon with models similar to that of Elance, speaks to the sheer number of people in the region who are looking for work. The first-time hired freelancers numbers, Elance’s most important metric according to Olsen, denotes the number of these who are highly qualified. Olsen concurs: “MENA is very interesting right now because there’s a huge amount of talent across the region. We want to bring more opportunities to these people.”

Regionally, Elance already has startup mobilizers in Turkey, as well as 13 other countries including Egypt. “Eventually,” says Olsen, “we’re planning to expand this to 20 countries and 40 mobilizers.” This might take a while, however; Elance is in the midst of a massive merger with oDesk, another giant online freelancer marketplace. Olsen wouldn’t comment on the status of the deal, but the original announcement said it should be on track to close this month.

But regardless of the timeframe, Olsen is confident that “we’ll continue to expand activities in MENA…. We’ve noticed a massive increase in entrepreneurial activities across the region, in Dubai and everywhere. It’s an exciting time for the region, that’s for sure.”