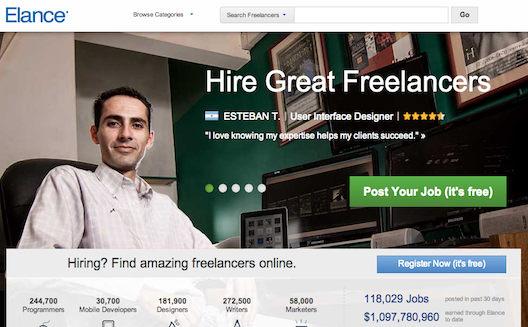 This article was amended on June 5th 2014 to include increased contextualization of Elance-oDesk within the regional freelancer services ecosystem.

The world’s largest online staffing platform, Elance-oDesk formally launched yesterday at Dubai's in5, an innovation hub for entrepreneurs. With over two million clients in nearly 180 countries worldwide, Elance-oDesk’s expansion into Dubai follows a successful ramp-up of activity in Egypt over the last two years, in which the platform achieved approximately 80 percent annual growth. As Elance-oDesk freelancers' earnings are expected to total $1 billion USD by the end of 2014 and are projected to hit $10 billion USD by 2020, the platform is set to harness the growth potential for the regional freelancer economy.

“All signals indicate that online hiring in MENA is growing faster than any other region in the world, a combination of both growing client interest and the increasing availability of freelance workers,” explained Rich Pearson, Senior Vice President of Categories and Geographies at Elance-oDesk.

He added, “The UAE is ranked fifth in our country portfolio, with some 25,000 UAE-based jobs on our platform and nearly 60,000 UAE-based freelancers. Elance-oDesk is excited to be a part of the employment evolution in this region, providing an advanced and credible platform for talented freelancers and forward-thinking companies in the country.”

But Elance-oDesk is not entering into an empty marketplace; it competes with a range of freelancing websites such as Nabbesh, Jobzella, and Laimoon. Nabbesh is a direct competitor offering the same services as Elance-oDesk, and it already has an enthusiastic regional following (as several commenters on this article have attested). Since its launch in April 2012, its user base has grown to 40,000 freelancers and connected people with over 4,000 jobs.

According to Pearson, one of the key factors for the hiring evolution is that today’s professionals (particularly the Millenial generation) seek income security versus job security. He commented: “The days when folks joined a company to stay for two or three decades are now long gone. Today, talented workers expect to maintain a robust skillset and will look outside of their regular day job for opportunities that enable skill development and increased earning potential.”

Pearson also attributes the bullish growth projections in the online staffing industry to steady growth among startups and SMEs. “Ninety percent of our clients are companies with less than twenty-five employees,” he added. “Small businesses are readily responsive to hiring freelancers because it’s imperative for these enterprises to work smarter and more cost effectively in order to meet the bottom line and succeed in a competitive market.”

Pearson alludes that the workplace of the future would constitute a hybrid arrangement, wherein core functions (such as sales, marketing, legal, and finance, for example) remain in-house with seasonal or specialist tasks assigned to freelancers on an as-needed basis, citing the example of Elance-oDesk which maintains approximately 250 full-time employees and 500 freelance staff worldwide.

And what kinds of jobs are companies seeking freelancers for? “In general, 44 percent of listings are for IT and programming work, 22 percent for design, and 16 percent for writing and translation projects. The remainder of the jobs comprise administration and Customer Service, sales and marketing; finance and legal work,” shared Pearson.

Guests at the launch, including existing and prospective clients and users, expressed uniformly positive sentiment towards the platform while highlighting concerns regarding arbitration in the case of performance/quality disputes between clients and users and the need for additional options to enable clients to hire a team of freelancers and users to form collaborations with other freelancers and bid on jobs as a team.

Sameer Abdulrehman, who runs a fledgling mobile app development startup said that he consistently uses Elance to hire coders and graphic designers, primarily from the Philippines, India, and Pakistan. “My business is just starting to find its feet and this platform is the best thing for entrepreneurs like myself. It eliminates the costly and tedious process of hiring full-time or part-time staff and allows you to find the right folks to get the job done, at a fraction of the cost and time. Such platforms are vital for small business that need to source talented workers quickly and cheaply.”

An overwhelming concern that remains is of how Elance-oDesk can legally operate in the UAE given the country’s labor law pertaining to freelance work. “We have lately been made aware of the legal requirements for freelance work in the UAE and are working through our City Manager, Walied Albasheer, to determine how our platform can best serve professionals seeking freelance work and interested clients within this mandate,” vouched Pearson. “Delivering the best product to our clients and users is our first priority. Anything that builds transparency in labor sourcing, promotes workforce development and productive utilization of the labor force is something we support.”