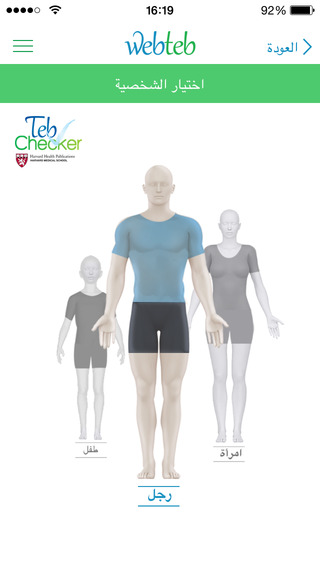 Leading Arabic health and lifestyle portal Webteb has announced the launch of its mobile WebTeb App, the first of its kind in Arabic. The app, which targets Arabic speakers in the Middle East and North Africa (MENA) markets, contains information about health and wellness that seeks to enable users to make informed health decisions. It also allows users to interact with health practitioners, hospitals, doctors, dentists, pharmaceutical companies and health education institutions.

WebTeb was founded in 2011 and licensed by Harvard Medical School and the Mayo Clinic. The mobile app is currently available on iOS.

As previously reported by Wamda, health-conscious visitors are accessing the site in increasing numbers. Since last year, the application has added new sections including diet and lifestyle programs, disease and treatments, and content related to pregnancy.

Driven by the support of the Siraj Palestine Fund, the Amman-based startup launched the mobile app in Arabic so as to take advantage of high levels of mobile penetration among Arabic speakers, particularly in the Gulf (Saudi Arabia and the UAE these have very high smartphone penetration rates, at 60% and 62% respectively).

“Our traffic comes primarily from the GCC and our site is accessed through mobile devices,” said Dr. Mahmoud Kaiyal, founder and CEO of WebTeb. “As people access health information through their mobile devices, we want to make our information even more accessible."

As mentioned in a press release, the WebTeb app contains a feature called TebChecker, a symptom checker that helps patients identify their conditions, a doctors’ directory which lists doctors according to the users’ location, several indexes including drug, disease, treatment, and tests indexes, as well as the only Arabic language drug interaction tool.

The company expects to launch an Android app in the coming weeks, and launch additional apps for diet, lifestyle, pregnancy, and more. You can download the iOS app here.