At the start of October news broke on social media websites that Voice over Internet Protocol (VoIP) applications such as Skype, WhatsApp and Viber would be blocked in Egypt.

Twitter user Amr Khalifa posted a message from Vodafone saying Skype had been blocked until further notice. While companies such as Mobinil were blocking Skype over 3G networks last year, 10 days ago the Twittersphere began complaining about blocked access to WhatsApp and Facebook voice services while using ADSL internet as well. 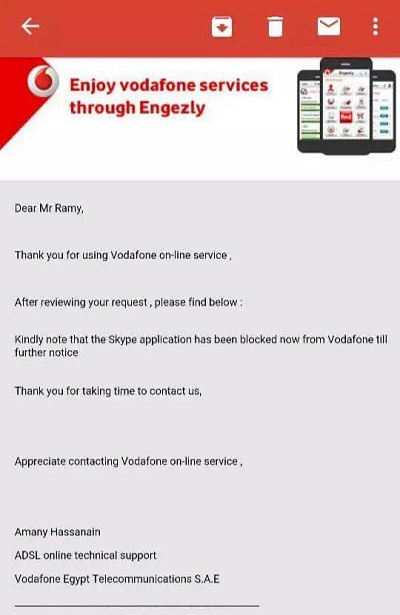 The message Twitter user Amr Khalifa received after trying to use Skype on October 5. (Image via Twitter)

The reasons given for this surprising move were that financial losses in telecommunication companies, caused by a shift away from regular calling and text messaging, made it necessary.

Neither Skype nor WhatsApp were able to respond to queries before publication.

The National Telecommunication Regulatory Authority (NTRA) issued a statement to state-owned news agency MENA saying that what was circulating on social media websites were just “rumors”.

The statement, however, did not subdue the uproar on social media.

But what would it mean for entrepreneurs if VoIP connections were cut?

“We are an online call centre which provides communications services through VoIP applications,” El-Husseini said. “After this rumor started many of our clients, such as Buffalo Burger and Shawerma Elreem, were concerned about how we will go about our business with them.”

El-Husseini pointed out that another problem was that their clients paid annual subscriptions for the User Talk service. It would create an additional problem for the startup in that it would be unable to to provide contracted services to subscribers.

Essam Maged, cofounder of web design and development agency Unplugged, said they relied on VoIP services as their main means of communication because 20 percent of their client base was abroad. He said they used it to communicate with some of their customers on a weekly basis.

Maged added that he had experienced issues with Skype calls in the past, but when he contacted his internet provider they stated it was due to “a cable that was cut”.

He pointed out that the importance of those applications doesn’t relate only to the voice features, but to the video and sharing features as well.

“Such features help us offer remote assistance to customers,” he said.

Maged said no solution was available at the moment if all VoIP services were cut in Egypt.

O’Donnell suggested that entrepreneurs would find a way to get around blocked VoIP applications, saying that this move “will also drive everyone to set up proxies and VPNs, and everyone will find a way to bypass any restrictions - operators once again trying to monopolize voice and they will fail”.

Tarek Ali Zanad, founder of advertising design studio Zanad, uses VoIP applications two times a week but maintained that business will proceed even after the VoIP blocking . He added that even though VoIP was important for the company, at the end of the day it was a tool and “another tool can always be created”.

“We learned that with changes in Egypt, or the world, we [entrepreneurs] can always adapt,” Zanad said.

Without a clear response from the Ministry of Communication and Information Technology, the issue seems to not have been resolved yet. Some users still suggest that they experience difficulties using VoIP applications.

For the time being, however, a ban on VoIP services is a concern many entrepreneurs share.