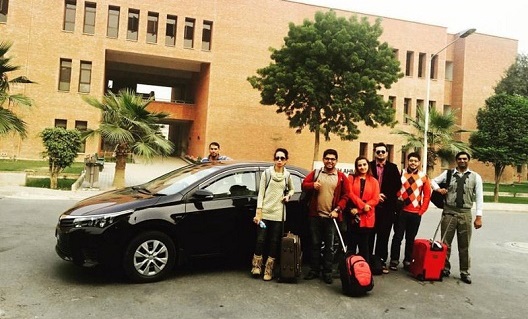 Visitors to Lahore from the Islamabad incubator i2i test out the Savaree service. (Images via Savaree)

Madeeha Hassan, founder of Pakistani taxi-booking app Savaree, ‘passenger’ in Urdu, is at the beginning of a fight for territory against two multinational companies who are muscling in on her turf. She describes what it’s like to build a market from nothing, then have to fight for it.

Uber has officially announced plans to scale to Pakistan, beginning in Lahore where I’m based, and my life is topsy turvy.

Of course, I’ve known about this for months. In the last year and a half, the ins and outs of ride-sharing, taxi rates, and driving logistics have been my life.

My inspiration? You guessed it. Travis Kalanick - the founder of Uber.

As some of you may already know, Savaree is the darling of the Lahore startup scene; we’re Pakistan’s indigenous rideshare platform with an on-demand cab booking service as well. Savaree is on a mission to build a community of people who do not want to ride alone.

So when someone from Uber flew all the way to Lahore to assess the Pakistani market in August this year, he was taken aback by my obsession with them.

Within a week of his flying back to the US, there was an email in my inbox from him, asking me to submit my CV to potentially work for them. At first, I was thrilled. My team was thrilled. Our team at Savaree pioneered the idea of ridesharing in Pakistan, and later taxi booking.

But it was a lot to think about. Would Uber enter Pakistan and dominate the market, a market that Savaree helped create? Would I be better off working for Uber, versus competing with the market giant?

After a lot of thought, I realized I was not ready to give up my baby and all the hard work we had already done.

I said no. Savaree created the niche. We know the market. We know competition.

But then came Careem

VentureDive launched Careem in Pakistan in May this year.

After my cofounder left, one of VentureDive’s founders contacted me with an offer to become the marketing and design head of VentureDive.

He said it would be difficult for Savaree to raise investment since the market was already saturated, and without investment I’d find it difficult to compete against the newcomers who were bigger and better funded than me. Basically, I might as well cut and run now.

Obviously, that wasn’t an offer I was going to accept.

The road we built

In the last few months, Savaree has gone on to take over the taxi scene in Lahore. We grew from just three rides a week to 70 rides a day, which was not an easy task in a city like Lahore where there was no existing 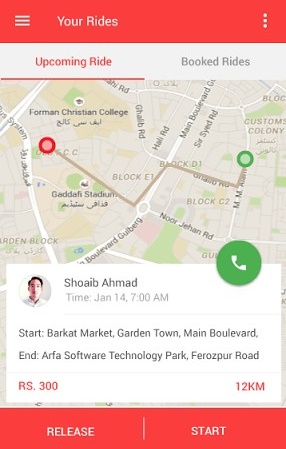 We started with students because the original inspiration for Savaree’s idea came from when I was a student and had to wait hours for a ride back home. We visited universities, signing up one user at a time, and even got students to sign up in return for chocolates (who said you shouldn’t take candy from a stranger offering you a ride?).

We also went from office to office, explaining Savaree to people with a 9-to-5 schedule and went to parking areas of schools pitching to people waiting to pick their kids.

Today people from all walks of life, from celebrities to foreigners to students, are using Savaree because we are affordable, reliable, and safe. We have built the ridesharing and taxi app market in Pakistan.

But then the worst happened.

When we deemed the time just ripe enough to start negotiating for investment, Uber updated its jobs page - with work opportunities for Lahoris.

The next morning, the investor backed out.

So there we were, waiting for Uber to do its magic in Pakistan.

For a day and half, I couldn't really move. I felt like I was in a dark tunnel as all my effort to build Savaree seemed to be disappearing. I’ve never been this demotivated in my entire entrepreneurial career.

It took a while for me to recover from the shock, and get ready to face the challenges.

One thing was for sure, it wasn't easy for me to let Savaree go like this. I pulled myself together, and got in touch with my mentors, who pushed me to keep things in perspective.

We’re up to the challenge. We’ve got a plan. We ain’t letting Savaree slip away. It's a dream I am carrying inside.

At this critical point, we’re almost running out of resources. We’re pursuing funding to keep the pioneers of ridesharing alive in Pakistan as we’re in need of someone to fuel this startup to keep it alive.

Whatever ends up happening when Uber steps in is a different story. We need to get our feet firmly on the ground before that happens, whether it’s by setting up strategic partnerships with other startups or joining hands with whoever can help us get in shape for the big fight.

That makes me think; would it be a fight after all? What if the big fish decides to eat this smaller fish? Would I agree to that? It’s hard to speculate anything right now. Till then, we’re ready to see how things evolve. It’s going to get exciting from here on out.

People once told me that it would be impossible for me, a Pakistani girl, to leave my family, to live alone in a big city and run my own startup. I’ve already done the impossible. Now I’m ready to take on the giants.