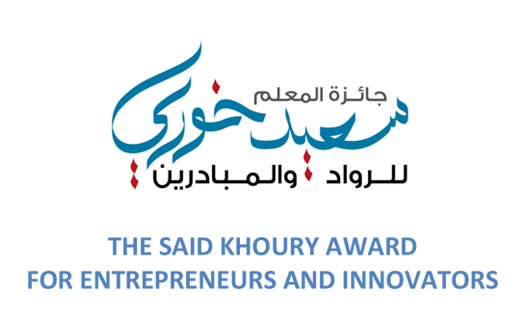 The Said Khoury Award for Entrepreneurs and Innovation are accepting applications for their new batch of entrepreneurs. At tribute to Palestinian business mogul Said Khoury, the awards are organized by his international venture, the Consolidated Contractors Company (CCC), and Al-Iktissad Wal-Aamal. This year's prizes will include a founding capital of 25,000 US dollars for four entrepreneurs. The deadline for submissions is April 30. All Arab innovators are encouraged to apply.

Said Khoury founded a school of values based on entrepreneurship, leadership, self-initiative and perseverance. His experience and values took shape as he co-founded the leading Consolidated Contractors Company (CCC) currently run by his sons, partners and a group of Arab elites, and he presided Al-Iktissad Wal-Aamal group for a quarter of a century.

As a tribute to Ma’alem Said’s journey, his national achievements and support for Arab skills and competencies, especially young entrepreneurs and start-up owners, both the CCC and Al-Iktissad Wal-Aamal have launched the annual Said Khoury Award for Entrepreneurs and Innovators among Arab youth.

The candidate must be the owner of a new business or start-up conceived through a unique idea, or the owner of an already-established business that went through its earliest stages with a clear-cut expansion plan ahead.

The submission can be made online here.