This quarter’s top five disclosed venture capital (VC) deals amounted to $99.1 million, with Egypt’s Swvl accounting for almost half of the total, the highest amount ever raised by an Egyptian startup. This quarter's top five were more diverse in terms of location, with two based in the UAE, compared to four in the last quarter.

In the first quarter of 2019, the top five disclosed deals amounted to $191 million, bringing the top 10 deals of the first six months of the year to $290.1 million, with the UAE accounting for $221.5 million of that.

Here are the top five from the second quarter: 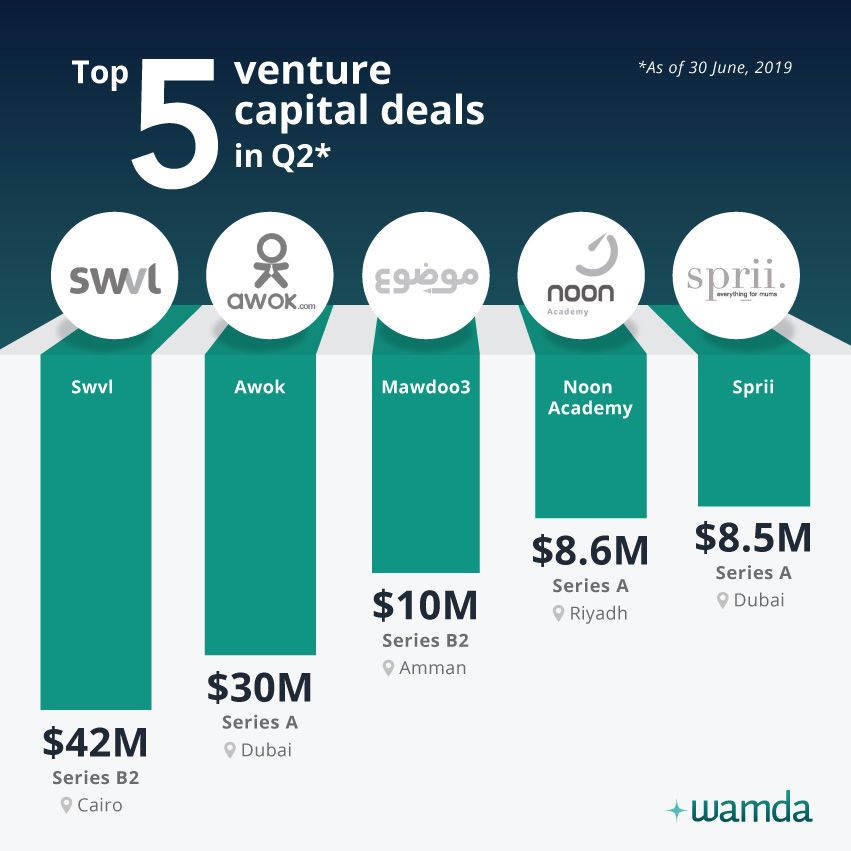 The biggest investment in the second quarter of 2019 went to Swvl, an Egyptian application for booking buses, raising $42 million from VC firms including Sweden’s Vostok, Dubai-based BECO Capital, China’s MSA and Endeavor Catalyst, based in New York.

The fund is also the biggest investment in an Egyptian startup so far. The startup that currently operates in Cairo, Alexandria and Nairobi said that it will use the funds to expand to different parts of Africa including Nigeria.

The UAE-based e-commerce platform AWOK.com came second in the list with $30 million in a round jointly led by StonePine ACE Partners out of its StonePine ACE Fund and Al Faisaliah Ventures.

The startup said that capital raised will mainly be used for further geographical expansion into Saudi Arabia, to enhance the AWOK platform, to reinforce the team and to increase AWOK’s offering across multiple product categories to cater to the growing demand in the region. AWOK also said that in the near future, it will scale its operations across growth markets in the GCC countries and North Africa.

Amman-based Mawdoo3, an online Arabic content publisher, secured $10 million in May. The startup had secured an initial closing of $13.5 Million in July 2018, closing its series B with a total of $23.5 million. The investment came from UK-based Kingsway Capital, US & Egypt-based Endure Capital, Endeavor Catalyst, Choueiri group’s investment arm Equitrust, and Amman-based AdamTech Ventures.

The startup said that the fund will be used for the launch of Ujeeb, a Quora-like digital Q&A platform that allows users to ask questions and receive answers in Arabic from different individuals.

Riyadh-based online learning platform Noon Academy raised $8.6 million in a Series A round co-led by Raed Ventures and Saudi Technology Ventures (STV), making it the fourth biggest investment this quarter and the largest ever funding round raised by an education-technology startup from Mena.

One of the more recent and fifth biggest investment this quarter went to Sprii, a Dubai-based e-commerce platform that connects mums to different global brands. The startup raised $8.5 million in its Series A funding.

The startup said it will use the fund to accelerate its expansion across the Middle East and invest in new technology and recruitment to enhance its customer experience.