Following DAPI’s open letter to the UAE Bank Federation Advisory Council penned by co-founder Mohammed Aziz over a month ago, open banking in the Middle East and North Africa (Mena) has come under the spotlight, raising questions over regulatory frameworks and whether they enable or cripple innovation for financial technology (fintech) startups in the industry.

DAPI has yet to receive a clear response from the concerned authorities, but the founders hope to be able to sit with the UAE Central Bank soon to discuss “a way forward for open banking and fintech collaboration” with the banks.

“We would like to see an ecosystem where regulators recognise that if you're going to kill innovation from now, banks are going to take time to eventually have those [application programming interface] APIs available. We want regulators to recognise the fact that there is a transitional period where you need to support third-party providers (TPP) until open banking standards are finalised and banks actually have APIs available,” says Aziz.

Like other open banking platforms, DAPI provides the financial infrastructure and API to enable other fintech and neobanking services to operate. It essentially serves as the backend infrastructure for innovation in fintech by opening up access to bank data to allow these TPPs to offer services to end consumers.

Apps like Dubai-based Ziina, a peer-to-peer (P2P) payments app which uses Dapi’s technology is one such example. The technology allows Ziina to make transfers on behalf of the user using just their username as opposed to making the transfer via a bank which would require entering copious amounts of data like account number, swift code or IBAN.

Another example is Wally, an expense tracker that pools user’s spending habits directly from their credit cards and bank accounts and offers artificial intelligence (AI)-driven insights into budgeting and spending habits.

According to consultancy firm A.T Kearny, there are three main models for open banking: 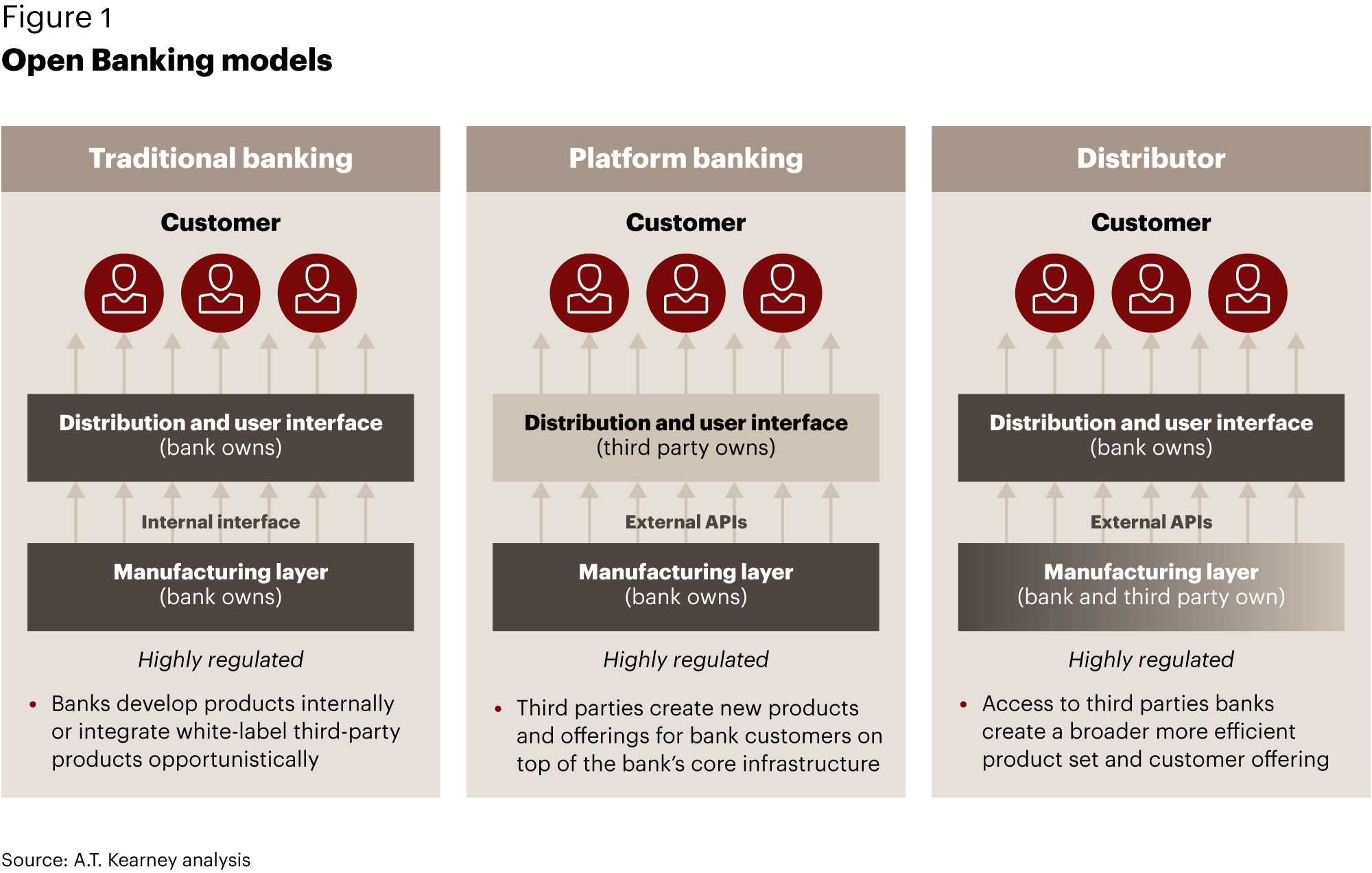 Globally, open banking has been a disruptive force, one that has either been mandated by the regulators (as is the case in the UK and Europe) and requires banks to cooperate with authorised TPPs or, as in the US where there is no open banking licence, it has been embraced by the banks who voluntarily share their data.

Perhaps the most successful open banking platform is US-based Plaid, whose API is used by the likes of P2P payments app Venmo, mobile investing app Robinhood and cryptocurrency exchange Coinbase. Visa has made a $5.3 billion bid to acquire Plaid, which was founded in 2012 with $297 million raised in funding. The US Department of Justice however, is currently investigating the acquisition on grounds of antitrust laws.

The development of open banking has also been the catalyst for neobanking in much of the world, a sector set to be worth $35.5 billion by the end of this year according to Business Insider and comprises some of the biggest fintechs including Brazil’s Nubank, which has amassed 36 million users, raised $1.4 billion in funding and is currently valued at $10 billion and the UK’s Revolut, with 10 million customers, $917 million raised in funding to date and valued at $5.5 billion.

The innovation that has erupted as a result of open banking has benefited consumers around the world, offering them greater choice and providing incumbent banks with the opportunity to tap into new services and customer segments, subject to their readiness to adapt to technology swiftly and efficiently.

Banks generate a massive amount of data every day from different sources, hence, they need an effective solution to manage that data and extract value from it.

“Your bank today knows where you drink coffee, where you have dinner, what you spend on a monthly basis, yet they treat you like they know nothing about you,” says Abdulla Almoayed, CEO and founder of Tarabut Gateway, the technology provider to the Central Bank of Bahrain’s (CBB) open banking initiative. Tarabut Gateway this week opened an office in both Abu Dhabi and Dubai with the aim to accelerate the opportunity for open banking in the country.

Driven by real-time data, fintechs have the potential to better understand the digital behaviour of each of its users and extract value from this data that is generated by the incumbent banks. As a result, this tracking helps them create  a more relevant and tailored user experience.

“Certain banks here started realising that no matter how much you process the user’s data from within your silo, you don’t get a clear picture – you need all data points to get all of the data points. This new infrastructure will allow banks to create real, customised products that suit people based on their habits,” says Almoayed.

Regionally however, there are only a handful of open banking startups including DAPI, Tarabut Gateway and Saudi Arabia-based Lean and overall, the concept is one that is viewed unfavourably by the majority of banks in the Middle East. One main issue is the data and who it belongs to. In Europe, with its stringent GDPR law, it is the customer who owns and has rights and access to their data. In the Middle East, this financial data belongs to the banks and opening access to third parties therefore sits uncomfortably with them.

“At a very high level, you've got a perceived momentum towards open banking. But what the region is lacking is the use cases that open banking can serve. Central banks won't just mandate banks to invest hundreds of thousands of dollars in changing their infrastructure to allow for APIs. I think they will do it if they see there's a reason for doing it,” says Samir Satchu, Public Policy Advisor to Mena fintechs.

It is on the agenda of regulators across the region, including the UAE Central Bank, to implement and have open banking eventually, as global experience shows that banks are better-off getting ahead of and defining the trend rather than crippling it.

“I think banks in the UAE, and the wider region, haven't got comfortable with what is the economic outcome of open banking to them, what is the return on investment of doing things like this,” says Satchu.

As such, open banking remains in its infancy across many markets in Mena, including those that have taken actions to develop standards and regulatory frameworks. Awareness is needed for both traditional institutions and consumers alike to allow for better adoption of open banking solutions.

In the second part of this feature, we take a closer look at the regulatory landscape for open banking in Mena