Amid today’s challenging labour market and lack of access to high quality education, young people across the Arab World are increasingly turning to entrepreneurship as a viable career path and alternative to formal employment, according to findings of the ASDA'A BCW Arab Youth Survey 2021, which comes as part of a report titled "Hope for the Future", released on Tuesday. The report highlights that 43 per cent young Arabs intend to start their own business in the next five years, up from 40 per cent last year. This intention is highest in the GCC at 49 per cent and North Africa at 48 per cent, but in the Levant, where the economies of Lebanon, Palestine and Syria continue to suffer, the intention to start a business is the lowest at 34 per cent. 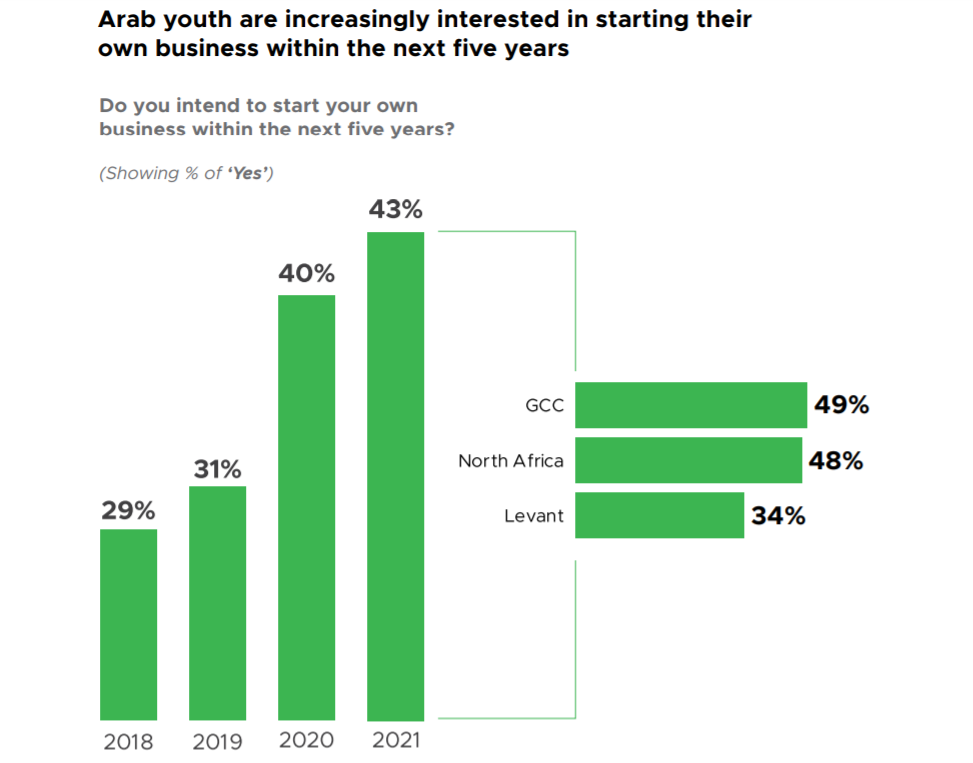 “An estimated 127 million young Arabs expected to join the Mena workforce by 2040, and as many as 17 per cent of all jobs at risk of disappearing by 2030 because of digitalisation and other Fourth Industrial Revolution trends,” the report stated. It adds plugging gaps in quality education attainment is key to helping young Arabs achieve their entrepreneurial aspirations.

While the interest in entrepreneurship continues to take off among Arab youth, the report showed that the sustained appeal of public jobs can put a drag on the growth of the technology sector. A significant fraction of young Arabs stated that the sense of security coupled with incentives that government employment offers is among the reasons why they are unlikely to start their own businesses. 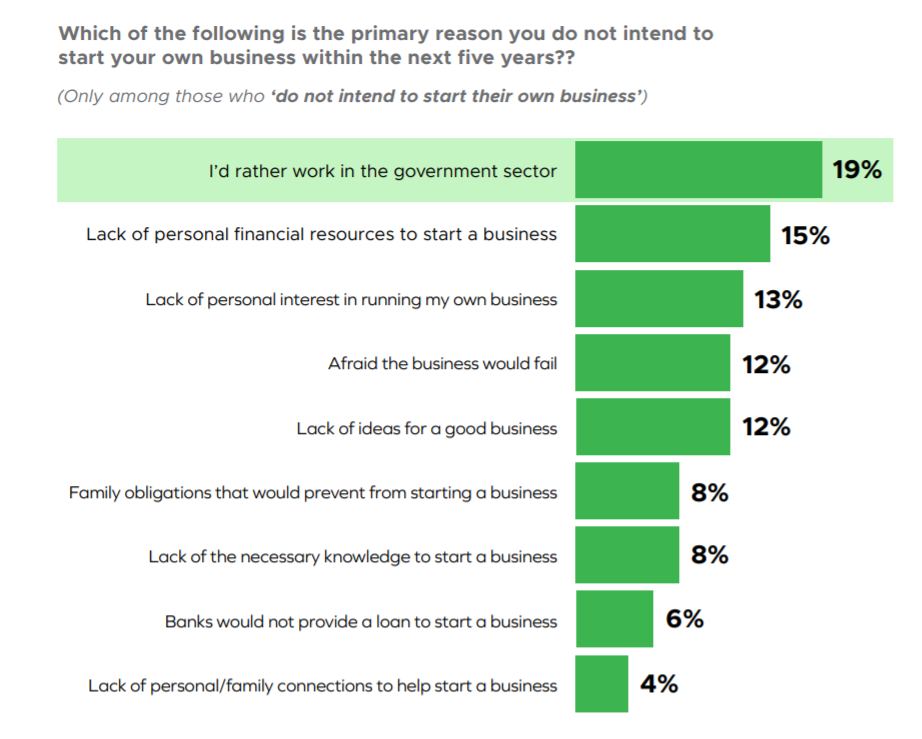 Limited capital, lack of personal interest, fear of failure and not having a good business idea are among the top personal reasons deterring young Arabs from pursuing entrepreneurship, the report highlighted while bringing light to the necessity of addressing other existing market-related challenges faced by early-stage entrepreneurs including the unskilled labour, non-existent or inefficient regulatory frameworks and limited access to funding.

For the technology sector to be more attractive for aspiring entrepreneurs, young Arabs participating in the survey suggested that regulations that can reduce red tape and facilitate affordable lending should be introduced and put in place and that continued investment in young talent is a must-have ingredient to enable the tech ecosystem to move forward. 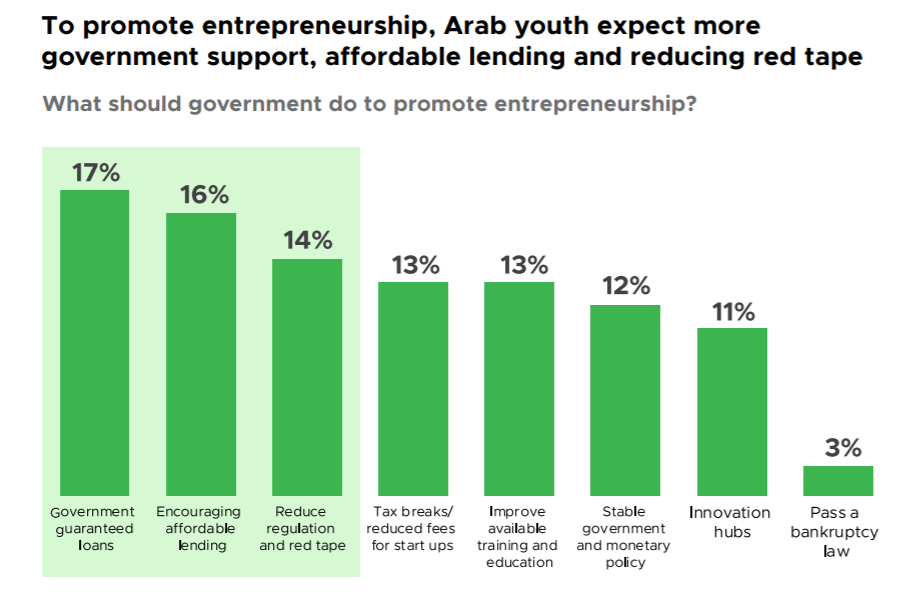 Additionally, the report shed a light on the continued growth of e-commerce activity among the youth, fuelled by the rising adoption of digital payment methods.

According to the survey's findings, about 75 per cent of the respondents said they have purchased a product or service online over the past year. In terms of products, food is the most purchased, followed by beauty products and groceries while music, books, movies and luxury goods are among the least popular online purchases. 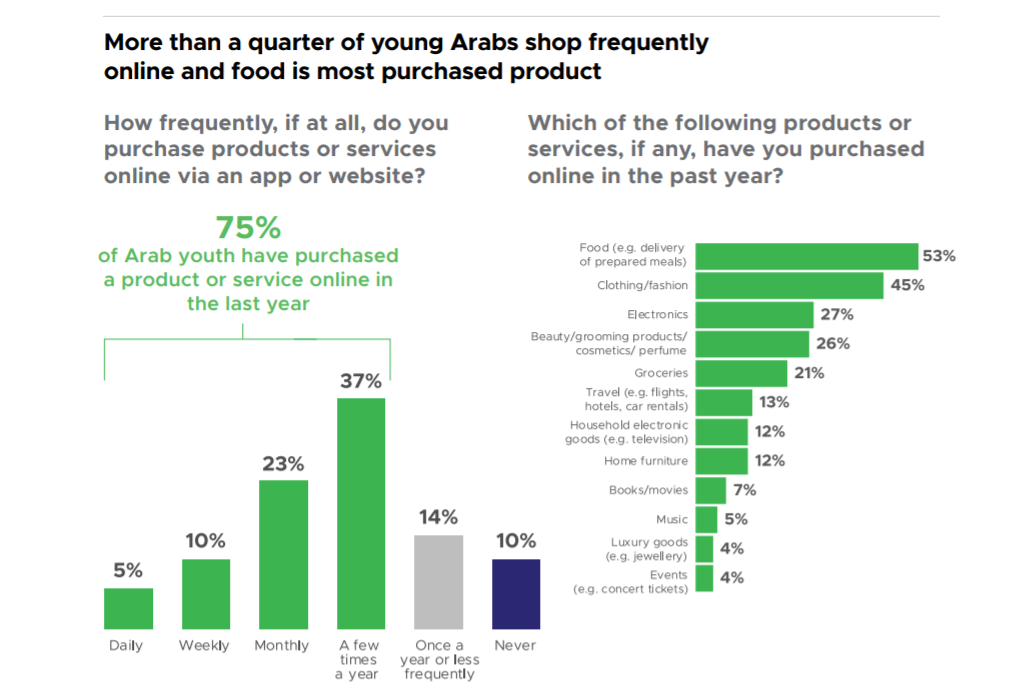 A total of 3,400 young Arabs aged 18 to 24 across 17 countries in the Middle East and North Africa were surveyed for the report.