Sarah Mousa eyed the small boys, vigorously hacking at each other with sticks in the narrow backstreet of Cairo’s Al Darb Al Ahmar slum, and apologized for the delay as her two employees put together a display model of a portable rooftop solar water heater.

Unfortunately, the local kids - perhaps even the ones engaging in the mock sword fight in front of us - decided it would make a better target for a stone-throwing competition.

Mousa is one of a class of entrepreneurs targeting Egypt’s growing off-grid, under-electrified or environmentally conscious market for solar energy. The businesses range from Mousa’s social venture to a company named Sun City that wants to re-engineer buildings’ plumbing to better work with solar water heaters, to the granddaddy of Egyptian solar energy startups, five-year-old KarmSolar. 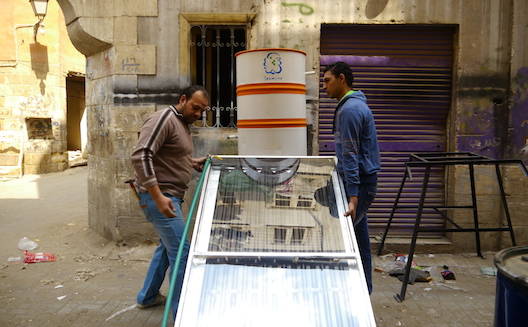 Egypt’s solar sector, made up of organizations large and small, was kick-started last year when the government finally threw its support behind the concept of renewable energy.

And with President Abdel Fattah Al-Sisi demanding 20 percent of the country’s energy to come from renewable by 2020 and government regulations flooding in after years of inactivity, the sector is picking up pace and young entrepreneurs are flocking.

Regulations to get solar energy off the ground in Egypt were finalized “very quickly” over the past 12 months, says Mohamed Sobky, head of the National Renewable Energy Agency (NREA). He says a lot of work was done during the five years before 2014, but the political threat of continued summer blackouts after Sisi’s election to the presidency in June forced the government into action.

The tipping point for entrepreneurs came in the middle of 2014 when the Egypt government did the unexpected and actually reduced energy subsidies, says Tarek Soliman, cofounder of high-end solar water heater installer, Solera.

“Before 2013 nobody would look at solar because there wasn’t a big problem. The government was subsidizing energy, but (later) because of the weak economy the government wasn’t able to support subsidies,” he told Wamda.

“We saw the opportunity of solar energy. We saw that the government at this stage won’t have sufficient capacity to supply energy to Egypt,” he said.

For others the government boost came in September 2014 with the introduction of feed-in tariffs (FiTs) for grid-connected solar and wind projects (the system where governments pay generators a set price for electricity they feed into the national grid).

The scheme is targeted at supporting large farms: the highest tariff, EGP1.025 per kilowatt hour, is for plants generating between 20-50MW of electricity, and decreases incrementally for smaller plants and home-based systems. This is out of reach for the majority of startups, but some with the capacity to build large farms, such as KarmSolar, are moving to take advantage of the program. 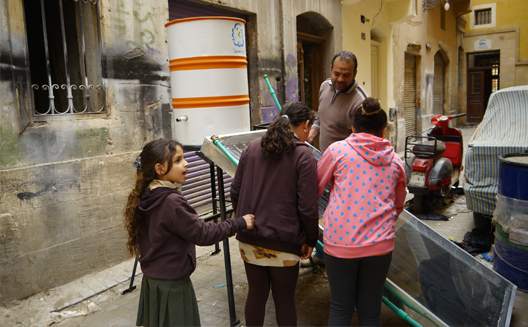 While there is no shortage of opportunities for Egypt's solar energy startups, it's too early to tell which technology or business model will prevail. Shamsina is trying to provide hot water for the poor with its solar water heater.

KarmSolar, which started selling solar water pumping systems for farmers and others who couldn’t access the national grid, is adding two large-scale solar farms to its portfolio: one of 2MW and one of 20MW.

CEO Ahmed Zahran abhors the idea of being dependent on the government and says large-scale solar farming is not the most profitable part of the market for the company, but claims the move is necessary to take advantage of the automatic income promised by FiTs.

"We don't want to be dependent on the government but we are spreading our risk (by) having different clients.”

The opportunities for energy-oriented entrepreneurs in Egypt are vast and opinions are divided on which part of the solar energy technology spectrum will be the biggest winner.

Zahran says KarmSolar’s competitive advantage is in offering technology that no one else has to the growing number of people who can’t access the national electricity grid. It’s starting to produce a crucial part in Egypt to better manage the quality - although Zahran’s secretive about which part as it’s still being tested - and putting a hybrid solar-diesel pumping system through its paces.

Ahmed Abbass of Sun City believes his water recirculation system will be critical for people investing in solar water heaters as it will prevent water wastage from leaving the tap on while waiting for hot water to come out. He’s aiming the complementary system, which is still in the prototype phase, at high-end customers.

Solera is planning to open Egypt’s first solar water heater factory this year with a view to exporting to MENA and Africa. Soliman, a former investment banker, says the startup’s research shows solar water heaters are the most profitable for seller and customer: one of their solar water heaters installed on a villa inhabited by six people can save 3,106 kWh annually, or $325.69. The payback is around 3.5 years and after that the owner will have 15 years of free hot water.

And RodoSol cofounder Ahmed Moukhtar says although the market it massive, it’s rooftop photovoltaic (PV) panels that should be the foundation of the country’s solar industry, and government support via attractive loans would assist the sector.

“We believe that 60-75 percent of the energy generated from solar should come from roof-top applications,” he told Wamda. “The market is quite virgin and big, so the potential is there. There is room for everyone until the market is saturated and this will not happen before 10 years.”

Teaching the next generation

Training for prospective entrepreneurs and people interested in solar technology is now available in Cairo through the Egyptian Solar Energy Development Association (SEDA) and the RENAC-Oasis Solar Energy Academy.

“It's crucial for companies interested in operating in the field of solar energy to be qualified to do so,” Moukhtar says. “We are even discussing currently with NREA to regulate this issue to avoid having unprofessional companies enter the solar market and destroy the essence of its meaning by providing low quality installations that will affect the reputation of the solar industry as a whole.”

SEDA is working on expanding awareness and providing low cost training courses, while the Academy provides certifications for engineers and technicians working on solar thermal and PV projects, general knowledge courses for entrepreneurs and managers, and mentoring for startups.

Investors, however, are still not wholly on board with the swelling number of solar-related startups seeking cash.

Lack of financing and difficulties accessing the benefits currently available was a constant complaint from most of the entrepreneurs Wamda spoke to. They suggested green funds, soft loans and functional tax breaks as solutions to the cash crunch, in addition to the cheap loans being supported by the government for renewable energy projects.

Serial entrepreneur and investor Con O’Donnell told Wamda that a few solar-related startups had pitched the Cairo Angels for investment funding but the audience, unused to assessing renewable energy startups or companies requiring large investments in research and development before being able to build a commercial product, was skeptical about the ideas presented.

Startups that have received seed funding recently include Sunergy and Solarist, both through the Cairo-based accelerator Flat6Labs.

He says KarmSolar ends up paying a lot in duties just to get equipment through customs but is working on a strategy - which he refused to outline, in the name of competition - which will solve this particular problem soon.

Tax issues and scarce investment funding aren’t the only challenges to Egypt’s solar startups: low oil prices and the new era of coal are issues that could begin influencing the sector.

In December, oil minister Sherif Ismail said in a statement that Egypt could save $3.9 billion, or a third of its subsidy bill, if oil prices remained between $50-60.

Countries such as Indonesia are using the extra money to reduce or end subsidies on fossil fuels. However, although Egypt did start its five-year subsidy reform package last year the government may be wary of embarking on this year’s promised second round of reductions if lower oil prices means it doesn’t have to, given the backlash it faced following the first round.

Moreover, in April last year the Cabinet approved coal imports for the first time in Egypt’s history, creating a new source of low-cost energy competition for solar projects. The country is now planning its first, and the world’s largest, single site coal power station, and companies including Orascom are planning to large build private stations as well.

Entrepreneurs, like the big corporate players such as ElSewedy Electric, are leaping into Egypt’s renewable energy sector. As the population continues to outgrow the country’s energy infrastructure, the field is open for innovative startups to plug the gaps left by intermittent state power supplies.