"Everybody has ideas. Most people are afraid to take first step. Go for it." @mcuban #StartTheSpark @WhiteHouse #PAGE pic.twitter.com/SwTSb7a7E8

As one of five speakers from around the world, Sankari joined a panel that included ‘Shark Tank’ entrepreneurs Mark Cuban, Daymond John, and Barbara Corcoran, to talk about their startups.

Among founders from Colombia and Nigeria, the now San Francisco-based founder was selected by the Obama administration as a representative of innovative solutions to some of the world’s toughest challenges, including poverty, climate change, extremism, as well as access to education and healthcare.

Sankari told Wamda that meething with President Barack Obama, and Vice President Joe Biden, was inspiring. He commended their work on cardiac monitoring and “encouraged us to do more in service of healthcare.” 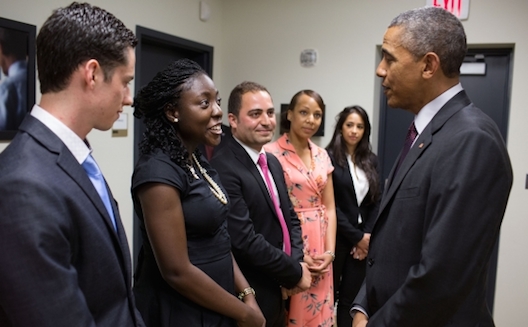 Increase of US investment

Investment in, and recognition of entrepreneurial efforts cannot come often enough, and certainly no less so than from the seat of American politics. As part of the event President Obama announced the increased steps his administration would be taking to help entrepreneurs, at home, as well as abroad.

In his address at the event Obama said: “Where violence and deprivation are sadly daily facts of life, what people are most eager to hear about are opportunities to start a business […] the power of entrepreneurship to shape their own destinies.”

"To all the young entrepreneurs out here, you are the face of change." —Obama: http://t.co/UUZzo2VVfD #StartTheSpark http://t.co/rcjLsenJFa

The US administration’s efforts in this field are culminated in the Spark Global Entrepreneurship Initiative. Launched in November 2014, but officially announced at this event, it will see the coalition of entrepreneurship organizations to “connect, coordinate, and create common goals across public, private, and nonprofit sector efforts to advance entrepreneurship around the world,” according to a White House statement.

“At a time when we’re still working to sustain the global economic recovery and put people back to work, helping folks to start new business can spur broad-based growth, here at home and around the world,” continued Obama, in his speech.

Ahead of the Global Entrepreneurship Summit in Kenya in July, the US administration is looking to raise $1 billion in private investment, through Spark, for emerging entrepreneurs by the end of 2017. According to the White House statement half of this amount will be specifically for women and young entrepreneurs.

Sankari is of course no stranger to the benefits of US-led funding. Back in 2011 his team won $20,000 through Global Innovation through Science and Technology (GIST), the US Department of State funded initiative.

With Mark Cuban of the Shark Tank pic.twitter.com/YgvD2tuJRf

Sankari’s company CardioDiagnostics, leveraged wearables and cloud computing to help monitor heart conditions. The wearable LifeSense is equipped with a heart monitor. Inspired by the early death of his father to a heart attack, the device monitors a patient’s heart rate and alerts a hospital or doctor in an emergency. With a built-in GPS the patient can be immediately located.

During his address the President recognized the efforts of Sankari, and Jordanian Lina Khalifeh, founder of SheFighter, a self-defense training studio in Amman.

Maybe referencing his own campaign themes of hope and change, Obama told the attendees that “you are the face of change [...]  You have the power to drive creative solutions to our pressing challenges.  You know how to bring people together to work toward a common goal.  And I believe in all of you.”