Nanotechnology has been used in the oil and gas sector for decades, but in the last 15 years companies have been investing bigger sums than ever into the technology.

As Egypt struggles through an energy shortage, one scientist is hoping an entrepreneurial oil executive will notice – and utilize – his research on nanotechnology, and allow the field to finally take off in his country.

Dr. Adel Salem is only months into a new position at the brand new Future University in Cairo, where he heads research on ‘enhanced oil recovery,’ or EOR as it’s known in oil sector parlance, using nanoparticles.

That research could add 10-­20 percent more oil to Egypt’s current production, he believes, which has been in decline since 1996. That's between 70,000 and 140,000 extra barrels of oil per day. To put that in context, total production in major gas operations in the Kurdistan region of Iraq has grown steadily to reach 70,000 barrels of oil equivalent per day.

Moreover, as current technology only allows for the extraction of about one-third of a reservoir’s oil, this technology could rejuvenate Egypt's large number of brownfields (oil fields that have been developed and then shut down after the easy resources have been extracted). Therein lies an opportunity, Salem believes, for a forward-thinking businessman or woman. 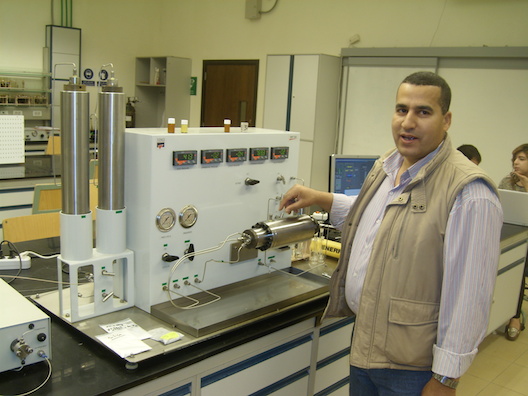 Salem is currently testing a sandstone core sample from an oil reservoir near the Bahariya formation in central Egypt. The plan is to find out the ultimate recovery factor using nanoparticles. These nanoparticles have been created from sand - silica - between one and 100 nanometers (very small). This nanomaterial is dissolved in a saltwater solution and the fluid is flushed through the core sample. The recovery factor from that experiment is compared to the same process using water and polymer flooding. Salem says the result is promising and could open a new era in enhanced oil recovery.

Salem himself has spent years working on these techniques, starting at Suez University and continuing on a scholarship in 2008 to do a PhD at Leoben University in Leoben Austria.

Scribbling diagrams on an A4 notepad in his office, Salem explained how nanoparticles are supposed to work inside a reservoir.

“If this is a bubble of oil and this is a solution containing some nano, for example, if this tiny particle moves with a certain force, it can invade this boundary interfacial tension [on the oil bubble], and another one invade here, and here... which means that at the end of the day it will break down the interfacial tension between the oil and water,” Salem said.

After the oil bubble is split into smaller droplets, the liquid can more easily move through the reservoir and into the well after it's flooded once more with normal water.

Furthermore, nanoparticles ‘dissolved’ in steam have the ability to transfer heat from the earth’s surface down to the reservoir, which can make the oil less viscous and more likely to flow easily.

What this means is it’s easier to extract oil from a reservoir. It also means more oil can be extracted in a shorter period of time, reducing costs and allowing a company to use its equipment and staff more effectively.

Salem uses silica particles, as they are readily – and cheaply – available from China: in 2012 he bought a kilogram for $90.

In the lab, Salem’s team achieved an oil recovery rate of 90 percent. In the field, this could mean results of around 50­-60 percent.

Researchers across the Middle East are looking into this particular issue, which is just one of many dilemmas nanotechnologists are seeking to solve for oil and gas producers. But because each oil reservoir is unique, successful experiments in Oman and Saudi Arabia can’t tell researchers or companies anything about reservoirs in, for example, Egypt or Libya.

“The most important thing in my research [is that] me and my group are the first who are working in this field experimentally [in Egypt],” he told Wamda. 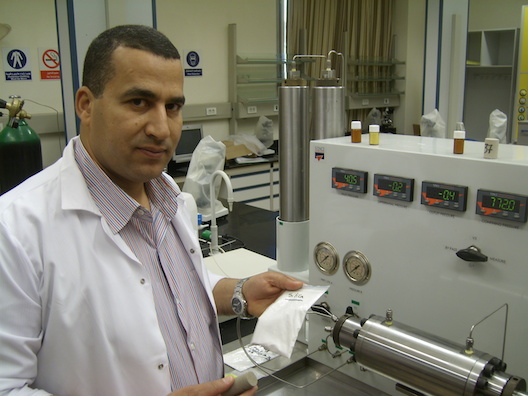 But researching Egypt’s oil reservoirs is not straightforward.

Salem says oil companies are protective of their sites and hesitant to hand out core samples to researchers. Many of these locations are restricted due to national security.

But Salem’s biggest hurdle is hesitance on the part of oil companies working in Egypt to using new technology to extract oil. He says most companies operating in the country rely on the natural pressure of the reservoir and water flooding, meaning they stop short of using more effective options such as chemical or thermal EOR such as steam flooding.

“Here in Egypt we need to focus on any way to improve our recovery. We have to try a type of chemical flooding and then jump again to new technology because in experimental work all over the world, nanotechnology has proved its efficiency.”

Furthermore, although Salem wants to commercialize his findings, regulations can prevent university staff from profiting from their research. He's relying on an open-minded businessman or woman to realize the benefits of nanotechnology and introduce it to Egypt.